(RNS) Conservative Christians are taking credit for the Republican sweep of the U.S. Senate and GOP victories farther down the ticket in Tuesday’s midterm elections, and they predict they will prevail again in 2016.

“This is not only the largest single constituency in the electorate, but it is larger than the African-American vote, the Hispanic vote, the union vote and the gay vote combined,” Ralph Reed, one of the most recognized figures in conservative Christian politics, said Wednesday (Nov. 5) in a celebratory post-election press conference. 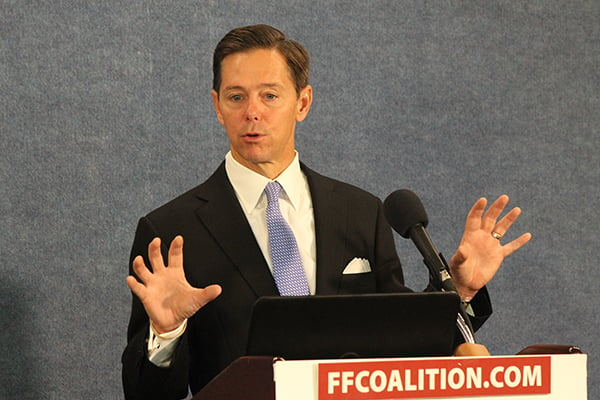 Reed, who chairs the Faith & Freedom Coalition, which mobilizes conservative Christian voters across the nation, said politicians in both parties ignore this constituency “at their own peril.”

Reed pointed to a poll commissioned by his group that shows that conservative Christians — Protestants and Catholics — made up 32 percent of the Republican electorate, and that they overwhelmingly voted (86 percent) for Republicans Tuesday. These voters contributed 52 percent of the total votes received by Republicans, according to the Public Opinion Strategies survey, which had a margin of error of plus or minus 3.5 percent.

But some experts pointed out that little has changed in the religious electoral landscape.

Protestant and Catholic voters made up about the same proportion of voters as they did in the last two national elections, and they split their votes between Republicans and Democrats much as they did in 2010 and 2012, said Mark Silk, a professor of religion in public life at Trinity College in Hartford, Conn.

“Simply put, the more things changed, the more they stayed the same,” wrote Silk, who relied on CNN polling, in his post-election blogpost.

So why did the conservative Christian vote hold so much sway this year?

It’s all about the context, said Daniel Cox, research director at the Public Religion Research Institute. Conservative Christians had an outsized influence in the 2014 elections because, among other reasons, deeply conservative states claimed a particularly large proportion of Senate races, with Democrats losing in Arkansas, North Carolina and Georgia, among other states.

Add to that the unpopularity of Democratic President Barack Obama and the fact that older — read “more conservative” — voters turn out in higher proportions during midterms.

“Evangelicals were playing on their home turf,” Cox said. “They had home-field advantage because they were competing in states where they make up a much larger proportion of the population.”

But while “patterns of voting among religious voters is fairly stable … and is unlikely to change in the near future,” Cox continued, evangelicals may see their influence dwindle in the not-too-distant future.

“In 2020 the entire millennial generation will be of voting age,” Cox said. “They are not voting in large numbers now. But they will. You settle down and you start voting more regularly.”