SALT LAKE CITY (RNS) A Mormon bishop in Los Angeles set off political fireworks by asserting that Senate Majority Leader Harry Reid was not worthy to enter one of the faith’s temples for his support of Democratic Party stances.

The response to the piece, “Good Riddance to Harry Reid, the Mormon Senate leader,” from many Latter-day Saints on social media — and even the Utah-based faith’s public-affairs arm — was immediate and critical. 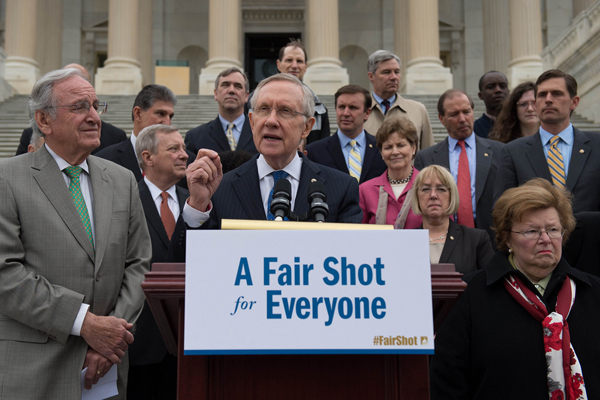 “Members of The Church of Jesus Christ of Latter-day Saints are, of course, entitled to express their own political opinions,” spokesman Dale Jones said in a statement. “However, publishing such views while using a title of a church officer, even if only as a leader of a local congregation as in this case, is entirely inappropriate.”

On Sunday (Nov. 9), LDS bishop Mark Paredes apologized but stood by his criticism of his fellow Mormon.

“I do apologize for the tone of the article, for giving the impression that I was criticizing Sen. Reid in my role as an LDS bishop, and for implying that I am in a position to judge the senator’s temple worthiness,” Paredes told The Associated Press by email.

“However, I can’t apologize for criticizing his advocacy of certain issues and on behalf of certain interests … Any criticism I had of Senator Reid was based on his actions (e.g., defense of the gaming industry, advocacy of a certain social agenda), not his political affiliation,” he added.

Paredes’ original post appeared on his blog at the Jewish Journal, where he described the questions asked of Mormons before they can receive a “temple recommend” for admission to the faith’s sacred temples. Paredes said members are asked if they “support, affiliate with or agree with any group or individual whose teachings or practices are contrary to or oppose those accepted by the (LDS Church).”

Paredes said Democrats’ support for same-sex marriage and abortion rights — along with Reid’s shilling for the gambling industry — ran in opposition to the church’s positions on those issues.

“I have no problem with an average Mormon in the pew who supports the Democratic Party because one of its issues or positions appeals to him,” Paredes wrote. “However, occupying a national Democratic leadership position is an entirely different matter.”

Reid may be a “wonderful man,” Paredes added, but not “a man of serious religious faith.”

With the Republicans capturing the Senate, Reid, a Nevada Democrat, will lose his position as Senate majority leader. No other Mormon has held a higher elective national office.

(Peggy Fletcher Stack writes for The Salt Lake Tribune. The Associated Press contributed to this report.)

Flunking Sainthood
Why so many new Mormon temples when LDS growth is flat?
Follow us on Facebook!
Submit your photos to RNS