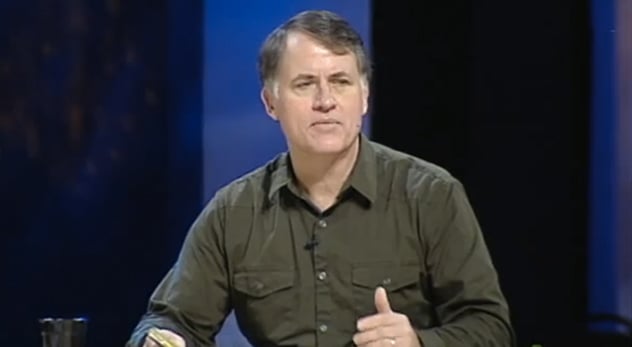 The bestselling author and Bible teacher explains why he is so passionate about Calvinist vs. Arminian debates. Along the way, he makes a provocative comment about God’s role in natural disasters.

If God is sovereign and in control of the universe, do humans really have free will? If humans have free will to do as they please, can God really be in control? The debate over God’s sovereignty and human’s free will is one of the hottest among Christians perennially. And now Randy Alcorn, New York Times bestselling author of “Heaven” and “If God is Good,” has decided he wants in on it.

In Alcorn’s new book,”Hand in Hand: The Beauty of God’s Sovereignty and Meaningful Human Choice,” he admits that this issue has become divisive among Christians. During his first decade as a Christian, Alcorn says he was “mostly Arminian” (those who emphasize human’s free will). Now he is “mostly Calvinist” (those who emphasize God’s sovereignty). He says he learned much on his journey that others need to know.

Here, we talk about why Alcorn believes the traditional approach to the debate isn’t working, what he’s proposing, and whether he agrees with John Piper that God is responsible for fatality-inducing natural disasters.

RNS: Christians have been debating God’s sovereignty and humans’ free will for centuries, but you’ve decided to engage it now. What is your book adding to the debate that is new?

RA: I’m compelled to recognize that there are two parallel lines that cross in God’s infinite mind, even if they don’t make sense to our finite minds. God calls upon us to believe paradoxical (meaning apparently contradictory, not truly contradictory) ideas. That way we can place our faith in God rather than lose our faith or give up the discussion because we can’t figure out how to reconcile them. I disagree with various ideas, but respectfully, I’m suggesting they are based not on complete untruth but partial truths–which lead to partial falsehoods.

RNS: You say the traditional approach to the debate isn’t working. How so?

RA:  I labored to be fair to each position, carefully avoiding misrepresentation, easy-to-refute straw men, or tilting the scales by selecting certain biblical passages while ignoring others. I quote directly from Arminian and Calvinist scholars and believe both opposing views fall within the bounds of Christian orthodoxy. I cite significant misrepresentations of Calvinism by Arminians and vice versa, and tried to state each position as their proponents would. Each positon can be supported by some Scripture, but I tried to show the need to bring all Scripture to the table, and to embrace paradox rather than rejecting one position in favor of another.

I quote from Arminius who glowingly complemented John Calvin’s commentaries. I cite Calvinist Charles Spurgeon who expressed deep respect for Arminian John Wesley. I tell the moving story of evangelists Wesley and George Whitefield, whose beliefs once separated them, but who came to love and respect each other. And the group discussion questions are designed so people with different perspectives could look at Scripture together and discuss these issues freely and respectfully.

RNS: Why is the first “hand” in the title not capitalized while the second one is?

RA: The lower case “hand” represents humanity while the uppercase “Hand” represents God. Calvinists may think hand in Hand sounds too much like the cooperative work of two equals, which glorifies humans and insults God. Arminians may think it implies that human beings are like children, with the child’s “choices” basically controlled by the parent.

I chose the title to express that God’s hand controls far more than ours, and he can at any time tighten or loosen his grip. Our choices are important, but [tweetable]God’s choices are much bigger than ours because God is infinitely bigger than we are.[/tweetable]

RNS: Why do you prefer “meaningful human choice” as opposed to “free will?”

RA: I think “free will” can mislead, because there are any number of choices we can’t follow through on. For instance, I can freely choose to fly but if I step off the roof to try it, I soon discover I don’t have the capacity. But there’s more. [tweetable]What limits humans is not just that we are finite, but also fallen.[/tweetable] Scripture says our wills are in bondage because we have inherited sin natures going back to Adam. I am not free, for instance, to make choices that earn my way to heaven!

[tweetable]I prefer the term “meaningful human choice” to “free will.”[/tweetable] because even when our natures prompt us to make particular choices that may not be entirely “free,” they are nonetheless meaningful and consequential choices.

RNS: John Piper has suggested that some natural disasters are ordained by a sovereign God. How do you respond?

RA: God didn’t create a world with natural disasters but both Calvinists and Arminians agree he allows them as part of “the curse.” Scripture shows repeatedly that God is sovereign over all nature.

Jesus said of his Father, “He causes his sun to rise on the evil and the good, and sends rain on the righteous and the unrighteous.” Psalm 147:18 says of God, “He makes his wind blow.” Blowing winds would include hurricanes and tornadoes. Job 37:13 says, God “brings the clouds to punish men, or to water his earth and show his love.” Numbers 11:1 says when Israel grumbled against God, “Then fire from the LORD…consumed some of the outskirts of the camp.”

[tweetable]Scripture shows that some natural disasters are indeed from God’s hand.[/tweetable] However, it’s wrong to view every natural disaster as a direct judgment of God on sin. When Jesus spoke of the man born blind in John 9:3, he said the disciples shouldn’t conclude his blindness was God’s judgment on some specific sin by him or his parents.

RNS: Make this debate practical for me. If I am already a Christian, why do I even care?

RA: If I don’t have the freedom to make meaningful choices, it makes me indifferent to the need to make wise and righteous choices. If it’s all in God’s hands, what I think and do won’t matter in the end. On the other side, believing in God’s sovereignty keeps me from viewing my life as random and in the hands of others who can ruin my life.