BOLOGNA, Italy (RNS) For the past eight months, young Mormon missionaries have trekked to a busy corner of Via Rizzoli and Via Calzolerie each Sunday to draw in chalk.

These missionaries aren’t reconnecting with childhood pursuits. Instead, they hope that their pavement drawings and the texts will spread the teachings of the Church of Jesus Christ of Latter-day Saints in a country they describe as godless.

“I have encountered a large amount of atheists,” said Anziano “Austin” Jensen, 20, an Idaho native who carries chalk as well as the Book of Mormon on his missionary assignment in Bologna. “This came as a shock to me.”

Italian pedestrians tend to tell Jensen that they were reared Roman Catholic but have lost their faith in the wake of tragedy or unanswered questions. 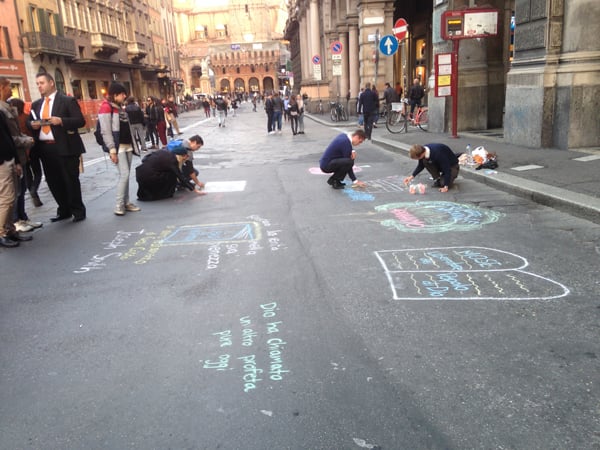 “They wonder where God is in the midst of the chaos and difficulties of the world,” he said. “This is a big question we encounter time and time again. As missionaries and servants of God, we joyfully testify to them that God has always been and will always be there.”

At a time when “tracting,” or going door to door handing out church tracts, is no longer seen as effective, Mormon missionaries are trying new methods of getting their message out.

Jensen and his colleagues tend to draw representations of “gospel dispensations,” or stories from scripture about Adam, Noah, Abraham, Moses, Jesus and Joseph Smith. “Or,” he said, “we outline the phases of the Plan of Salvation, explaining our life with God before this life until what happens after we die.”

Some missionaries encourage passers-by to contribute their own writing and drawings.

As one might expect, Jensen and his colleagues get a range of responses. Some are disinterested; others hang around for in-depth conversations. Still others, he said, add their own “vulgar or degrading material that distracts from or ruins our drawing.”

The chalk drawings are not unique to Bologna. Mormon missionaries have used the technique in New York and Colorado, said Eric Hawkins, a spokesman for the church in Salt Lake City.

And this sort of creative missionary approach is becoming increasingly popular, said Matthew Bowman, a history instructor at Bowling Green State University in Ohio and author of the 2012 book “The Mormon People: The Making of An American Faith.”

“Essentially, there’s been a growing decentralization of mission practices and an encouragement for local mission leaders to be more innovative,” Bowman said. “This is an attempt to find better strategies.”