BALTIMORE (RNS) The nation’s Catholic bishops are jumping into the increasingly contentious battle over immigration reform by backing President Obama’s pledge to act on his own to fix what one bishop called “this broken and immoral system” before Republicans assume control of Capitol Hill in January. 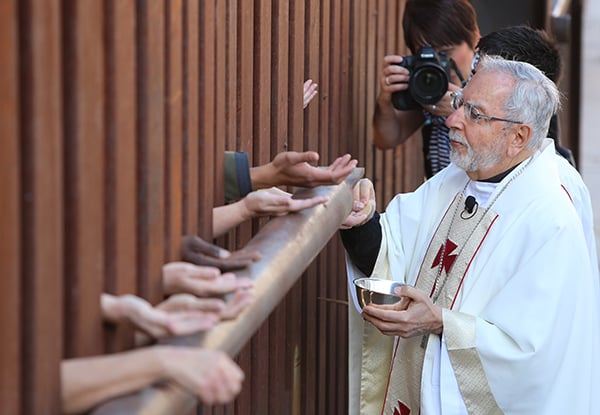 Bishop Gerald Kicanas of Tucson, Ariz., distributes Communion along the U.S.-Mexico border in Arizona to commemorate the deaths of migrants in the desert and to pray for immigration reform on April 1, 2014.

In an unscheduled address Tuesday (Nov. 11) at the hierarchy’s annual meeting, Seattle Auxiliary Bishop Eusebio Elizondo, chairman of the migration committee of the U.S. Conference of Catholic Bishops, said the USCCB would continue to work with both parties to pass comprehensive immigration reform.

But, Elizondo said, given the urgency of the immigration crisis and the electoral gains by Republicans who have thwarted earlier reform efforts, “it would be derelict not to support administrative actions … which would provide immigrants and their families legal protection.”

“We are not guided by the latest headlines but by the human tragedies that we see every day in our parishes and programs, where families are torn apart by enforcement actions especially,” he said.

During the summer, the president was moving toward unilateral action on immigration, despite warnings that such moves could exceed his constitutional authority or would turn voters against reform.

Then in early September, Obama said he would delay acting on his own, a move that was seen a way to protect vulnerable Democrats from any backlash in midterm elections. On Sunday, Obama told CBS’ “Face the Nation” that he was now “going to do what I can do through executive action.”

“It’s not going to be everything that needs to get done. And it will take time to put that in place,” he said.

Republican leaders in Congress responded by warning they will kill any immigration reform if Obama acts unilaterally. An immigration reform measure passed the Senate with the support of the bishops and the White House but was blocked in the Republican-controlled House.

Elizondo acknowledged that Republicans “might block any kind of initiative that the president might be taking” but said something had to be done.

Elizondo was not the only bishop to speak out on the issue this week. Bishop Gerald Kicanas of Tucson, Ariz., a leader in the USCCB and a vocal champion of immigration reform, told the Catholic news site Crux that “it may be necessary for the president to step up and to act” on his own.

Louisville Archbishop Joseph Kurtz, the president of the bishops conference, also made a point of telling the bishops — and the press covering the meeting — that he plans to meet with Obama and leaders of both parties in coming months in hopes of pushing immigration reform to the top of the agenda.

This week’s public lobbying by the bishops on immigration reform followed criticism by some commentators that the U.S. hierarchy was not following the new course set by Pope Francis, who has put such social justice concerns at the forefront of the church’s agenda.

It also marks a rare expression of support for the president from the bishops, who have battled the White House over gay marriage and the contraception mandate that was part of Obama’s 2010 health care overhaul. Many bishops had privately urged the USCCB to take a more vocal role on issues beyond gay marriage and abortion.