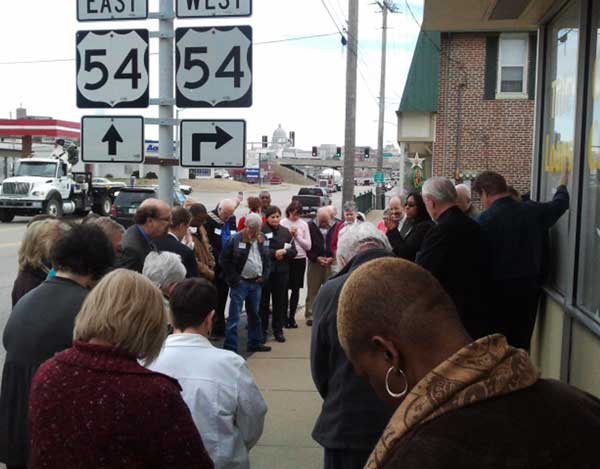 Clergy and staff from across Missouri gather in front of a payday loan shop in Jefferson City to pray for efforts to cap the rate lenders can charge in Missouri. RNS photo by W.T. Edmonson

WASHINGTON (RNS) Dozens of faith leaders and consumer advocates are pressing Congress to create a national interest rate cap for payday lenders instead of the exorbitant three-digit rates currently charged to people in several states.

Eighty activists from 22 states came to Washington in hopes of shaping new regulations that are expected from the Consumer Financial Protection Bureau. Many of their congregations are surrounded by payday loan businesses that they say prey on poor residents by charging high interest rates and creating a cycle of debt.

“Together, you guys are really bringing a strong message and a light and a moral perspective about predatory lending that’s valuable,” said Rachel Anderson, director of faith-based outreach for the Center for Responsible Lending, which spearheaded a three-day visit and training session for religious leaders on Capitol Hill. “We hope that your message is heard strongly.” 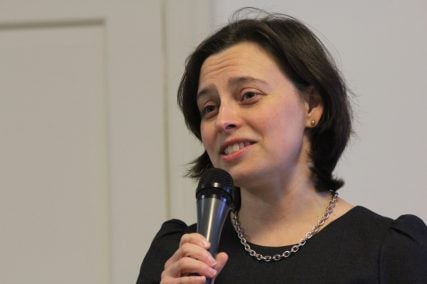 “We hope that your message is heard strongly,” said Rachel Anderson, director of faith-based outreach for the Center for Responsible Lending, which spearheaded a three-day visit and training session for religious leaders on Capitol Hill. Religion News Service photo by Adelle M. Banks

“If it’s fair for the military, we felt it should be fair for all people,” said the Rev. Susan McCann of Grace Episcopal Church in Liberty, Mo.

Stephen Reeves, an advocate with the Georgia-based Cooperative Baptist Fellowship, said a cap would eliminate “creative loopholes” used by the payday loan industry.

“That’s the solution — to make these funds affordable and attainable, where the trap is not set for the members of our communities and our churches,” he said.

The Community Financial Services Association of America, which represents payday lenders, rejects charges of preying on poor and minority communities, saying payday lenders “provide services to a broad cross section of Americans because there is widespread demand.” They say “payday advance customers are typical hardworking adults who may not have savings or disposable income to use as a safety net when unexpected expenses occur.”

In October, the National Association of Evangelicals issued a statement calling on payday lenders to offer products that “do not exploit poor and vulnerable borrowers” and urged the CFPB to investigate abuses.

NAE Vice President Galen Carey said consumers like him may have access to a 3.5 percent interest rate through a credit union, but others do not.

“That sort of resource is not available to all people, and so that’s why we need to have other provisions,” he said. 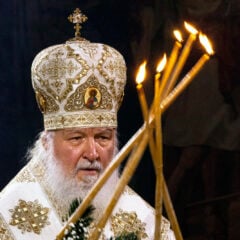