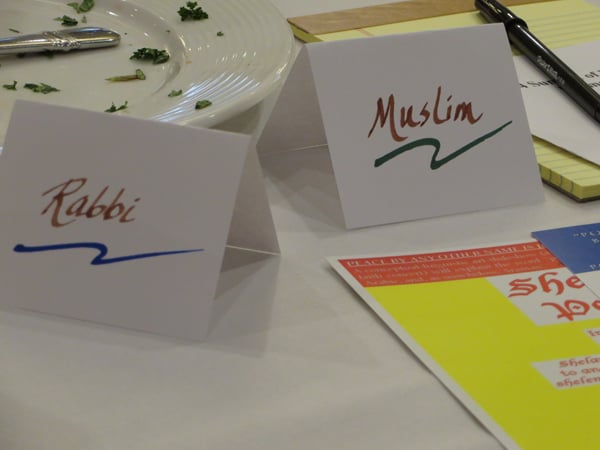 Placeholders at a summit of 60 rabbis and imams at Washington Hebrew Congregation in Washington, D.C. on Sunday (Nov. 23). Organizers hope to replicate the summit at cities across the U.S. in hopes of improving Jewish-Muslim relations, especially in light of continued violence in the Holy Land. Religion News Service photo by Lauren Markoe

(RNS) Frustrated by dangerously high tensions between Jews and Muslims in the Holy Land, 60 imams and rabbis gathered Sunday (Nov. 23) to hatch concrete plans to bridge the gulf between their communities, minus the kumbaya.

The “2014 Summit of Washington Area Imams and Rabbis,” its organizers hope, will be the first of many such gatherings of Jewish and Muslim clergy in cities across the U.S.

After prayers and a kosher-halal lunch at a Washington synagogue, the clergy resolved to limit the feel-good dialogue and spent the afternoon trading ideas both tried and novel. Among them: joint projects to feed the homeless, basketball games between Muslim and Jewish teens, Judaism 101 courses for Muslims and Islam 101 for Jews.

“Host a Seder in a mosque and hold an iftar dinner at a synagogue,” suggested Rizwan Jaka, who chairs the board at the All Dulles Area Muslim Society in Northern Virginia.

They threw out tough questions: “Do you invite people in your community who are particularly closed-minded to participate in interfaith dialogue?” asked Dan Spiro, co-founder of the Jewish-Islamic Dialogue Society. “Something to think about.”

And when Jews and Muslims meet, several imams and rabbis advised, do not sidestep the focal point of their mutual pain: the ongoing Palestinian-Israeli conflict.

Rage over the ability of both faiths to worship at Temple Mount — a site holy to Muslims and Jews, has heightened tensions with the violence culminating last week in a Palestinian attack on Jews praying in a Jerusalem synagogue that killed four worshippers and a Druze police officer.

“Discuss things from a spiritual narrative as opposed to a political narrative,” suggested Imam Sultan Abdullah of the New Africa Islamic Community Center in Washington, D.C.

Along spiritual lines, both Jews and Muslims believe they are descended from the sons of Abraham — Jews from Isaac and Muslims from Ishmael — a point both rabbis and imams repeated. In practice, they noted, similarities between the faiths abound. Both face toward the Middle East at prayer, for example, and share similar dietary laws. 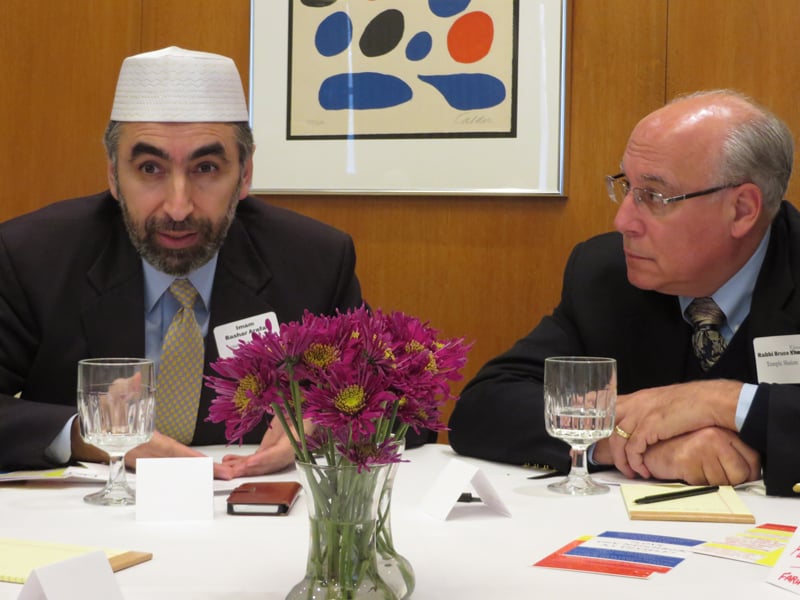 “In my view we are the closest two religions in the world,” said Rabbi Gerry Serotta, executive director of the InterFaith Conference of Metropolitan Washington, who sees healing between Muslims and Jews as a blessing that will resonate.

“There is something about a Jewish-Muslim rapprochement that is very important for the rest of the world,” Serotta said. “The perception is that Jews and Muslims are irreconcilable, and when people see that we’re not, it gives them hope.”

The event was sponsored by the Greater Washington Muslim-Jewish Forum, the Foundation for Ethnic Understanding, the All Dulles Area Muslim Society and Washington Hebrew Congregation, the synagogue where the meeting was held.