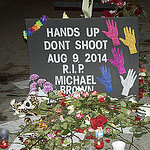 From an Aug. 19 protest in Ferguson, Mo. over the police shooting death of Michael Brown.
November 25, 2014
Lauren Markoe

From an Aug. 19 protest in Ferguson, Mo. over the police shooting death of Michael Brown.

After a grand jury decided against indicting police officer Darren Wilson Monday in the shooting death of Michael Brown, mostly non-violent protests erupted around the nation. President Obama urged calm. It was not calm in Ferguson, where angry people burned businesses and turned over police cars, as peaceful demonstrators tried to be heard above the din.

Many noted the juxtaposition -- captured on split screens -- of Obama's pleas for non-violence and the explosive reaction in Ferguson.

Some religious folks tweeted their thoughts.

Praying deeply for justice in #Ferguson tonight/throughout America in the days to come. Not optimistic about humans, but hopeful about God — Bishop Gene Robinson (@BishopGRobinson) November 25, 2014

Laura Turner says Christians should be the first to mourn the grand jury's decision. Chris Stedman lends his blog to Sincere T. Kirabo, a board member of Black Nonbelievers and a regional director for American Atheists, who asks secular humanists to join the battle to make sure black lives always matter as much as white.

Sex abuse problems. Money problems. The archdiocese of Philadelphia has had a full plate of trouble. Archbishop Charles Chaput Monday said Pope Francis' trip to the city for the World Meeting of Families next summer is just what it needs to turn itself around.

Erdogan tries to appeal to conservative Muslims with sexism

Turkish President Recep Tayyip Erdogan addressed a women's conference in Istanbul Monday on the gender's "delicate nature" and declared: 1. that they are not equal to men, 2. that feminists do not grasp the importance of motherhood in Islam, and 3. that the solution to racism, anti-Semitism and "women's problems" is justice. Other solutions might be for him to quit saying outrageously sexist things and to abandon his own anti-Semitism.

Reports from Provo indicate that Brigham Young University's beard policy has just gotten tougher, with the administration refusing "beard passes" to some who got them last year. For those not familiar with the BYU beard pass, you wear it around your neck, on a lanyard. It indicates that you are wearing a beard with the university's permission.

"Day of Prayer" gets day in court

The Colorado Supreme Court has rejected a case brought by secularists challenging the governor's right to issue "Day of Prayer" proclamations, arguing that the government spends a nominal amount on these proclamations and that because nobody has to participate, nobody is harmed.

Meet Cardinal Robert Sarah, of Guinea, whom Pope Francis just appointed to head the congregation for liturgy. His taste, we hear, runs to the traditional. Don't expect any rad additions and subtractions.

Israel’s 1948 Declaration of Independence already calls the nation "a Jewish State in the land of Israel,” and promises “the full social and political equality of all its citizens, without distinction of race, creed or sex." But now Israeli Prime Minister Benjamin Netanyahu is pushing hard for a bill that would further emphasize Israel's Jewish character, a move opposed by less conservative members of his ruling coalition, which may not survive the debate.

His name is Y. Sudershan Rao and the new Hindu nationalist government appointed him to lead the Indian Council of Historical Research. Fine. But Rao apparently thinks that Indian history can be understood without doing any real historical research, and relying on Hindu epics to explain the past. Reuters explains how he's making non-Hindus in India quite nervous.

Two teenage girls in full hijabs, believed to be part of Boko Haram, blew themselves up in a busy northeastern Nigerian market, killing 30 others.

At the shiva for the Jewish worshippers felled in last week's synagogue massacre, some Palestinians arrive to pay their respects.

Muslim clerics from 80 nations met in Qom, Iran to figure out ways to combat Islamic extremists. (Though it was good that the AP writer noted Iran's support of both Hezbollah, which targets Jews, and Shiite militias that have killed many Sunni civilians.)

Liberia could be Ebola free by Christmas, says its president.

That puts the holidays in perspective, eh?

Get a fresh take on the world's religion news tomorrow. Sign up for the roundup today. It's free and spamless.