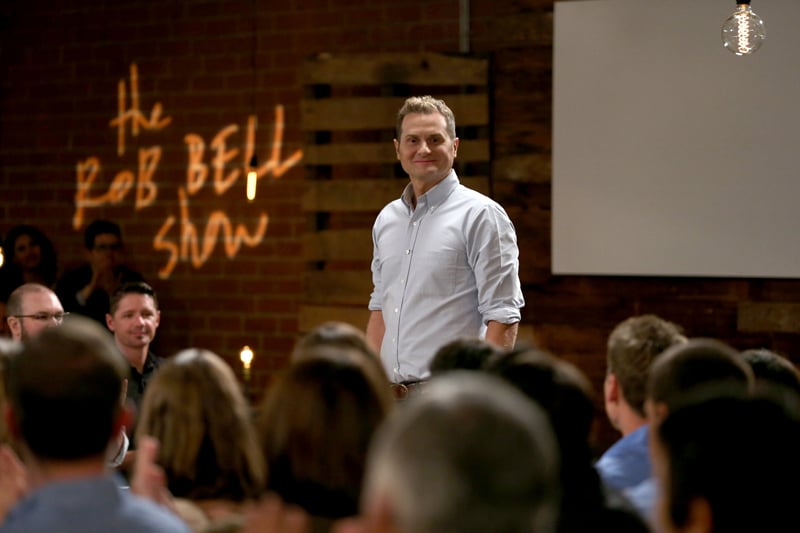 (RNS) Rob Bell was once the evangelical It Boy, the hipster pastor with the thick-rimmed glasses and the skinny jeans whose best-selling theology was captured in books with names such as “Velvet Elvis” and “Sex God.”

By 2006, the Chicago Sun-Times wondered aloud whether the Michigan megachurch pastor could be the next Billy Graham.

And then he went to hell.

In 2011, his book “Love Wins” pushed the evangelical envelope on the nature of heaven, hell and salvation. Many dismissed him as a modern-day heretic, unwilling to embrace traditional evangelicals beliefs about the hereafter.

While evangelicalism has always wrestled with the pull of its fundamentalist roots and a desire for a modern-day openness within certain boundaries, for many Bell had gone too far. “Farewell, Rob Bell,” retired megachurch pastor John Piper famously tweeted.

Now, the man who built a church of an estimated 10,000 people isn’t even attending an organized church. Instead, he surfs the waves near Hollywood and has teamed up with the goddess of pop theology, Oprah Winfrey.

Exchanging his evangelical bona fides for the blessing of Oprah may yet prove to be his most unforgivable sin, at least in some circles. Which is not to say that Bell cares very much what anyone says these days.

“I never spent a minute wondering whether I’m in or out.”

Does he still consider himself an evangelical?

“If we mean Jesus’ message of God’s revolutionary love for every person, and we can surrender and give our life to acts to loving kindness, then man, sign me up,” said Bell, 44.

After the initial battle over “Love Wins” died down, Bell seemed to disappear from the public eye. He left his Mars Hill Bible Church in Grand Rapids and headed out to California to work on TV projects.

“The Rob Bell Show” will premiere Dec. 21 on the Oprah Winfrey Network, a one-hour show that features Bell and is co-produced by him. He also recently toured the country with Winfrey on a “Life You Want Weekend.”

In many ways, some elements of typical evangelicalism are a good fit for Oprah’s lineup of public confession and personal transformation, said Kathryn Lofton, author of “Oprah: The Gospel of an Icon.” The difference, however, is that The Church of Oprah incorporates as many religious concepts as possible, while evangelicalism commits to exclusivity. 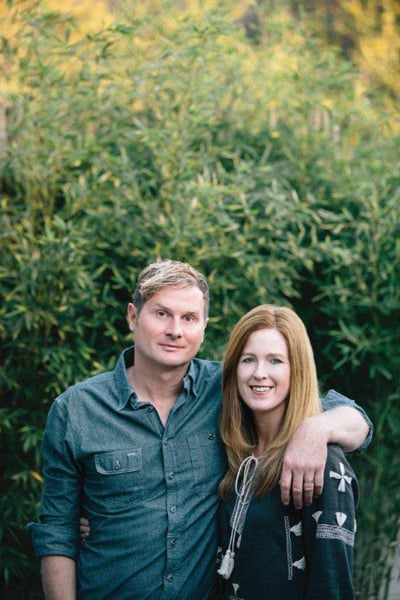 Rob and Kristen Bell, authors of “The Zimzum of Love.” Photo courtesy of David Tosti

“I think an interesting way to think about Bell and Oprah here is to observe how easily she incorporates him into her pantheon of spiritual advisers. She remains, as ever, the determining corporate deity,” said Lofton, a professor of religious studies at Yale.

“One way of looking at this is less a merger of two equal powers than it is the acquisition by one large corporation of another small business.”

To be sure, Bell still holds his evangelical credentials, with degrees from Wheaton College and Fuller Theological Seminary. And like other leading evangelicals, he’s trying to stake out some ground on marriage.

“It seems like marriage is one of the central things in life that needs all the help it can get,” Bell said.

For anyone looking for any hints to his theological shift, his new book, “The Zimzum of Love: A New Way of Understanding Marriage,” is likely to disappoint. He came out in favor of same-sex marriage in 2013, and few evangelicals seemed surprised. If he could question the existence of hell, they said, why wouldn’t he shift on his views about sexuality?

Bell says he would conduct a same-sex ceremony, and he encourages churches to welcome gay members and allow them to be ordained.

“This is a justice issue,” Bell said. “We believe people should not be denied the right to have someone to journey with.”

Books & Culture, a journal published by Christianity Today, mocked Bell’s latest work, inventing a fake publishing executive to push the man behind the Gospel of Zimzum.

“He won’t talk about the cross, or sin, or the idea that marriage represents Jesus and his bride or God and Israel. So he’s not a Bible Christian, but really a Christian, then. Our new kind of Christian. Our evogelical,” the piece said. 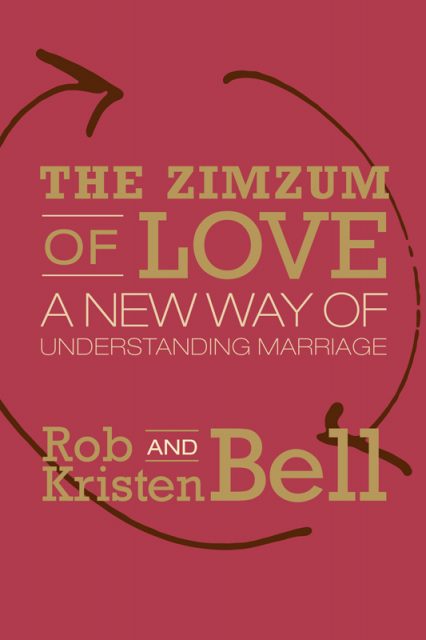 “The Zimzum of Love” by Rob and Kristen Bell. Photo courtesy of HarperOne

And Florida pastor Dave Harvey, reviewing “Zimzum” for The Gospel Coalition, a central hub of the Reformed evangelical movement, criticized Bell for quoting the Bible only three times in the book: “If Christianity were outlawed and a mob amassed to burn Christian books, ‘The Zimzum of Love’ would not be at risk.”

Even when he talks about marriage, Bell sounds more like Oprah than a theologian, meshing what sounds both spiritual and evangelical when addressing marriage as an institution.

“All of these things that people think dropped out of the sky by divine edict are actually a reflection of ongoing human evolution and a thousand other factors that have shaped why we as humans have done what we’ve done,” Bell said.

Bell co-authored “Zimzum” with his wife, Kristen, and he said “she’s generally three steps ahead of me” in his evolution.

Now resettled near Los Angeles, the couple no longer belongs to a traditional church.  “We have a little tribe of friends,” Bell said. “We have a group that we are journeying with. There’s no building. We’re churching all the time. It’s more of a verb for us.”

He’s still a fan of churches — depending on the context.

He conducts retreats in Laguna Beach and teaches on innovation, communication, creativity, how to read the Bible and how to surf. At the end of the gathering, he serves the Eucharist.

If he could do the “Love Wins” controversy over again, Bell said: “I would’ve had more fun with it. The book doesn’t even begin to go far enough. I let people frame it as though I was way off the reservation.”

Is he a universalist — essentially, someone who believes that everyone will be saved because a loving God would never condemn anyone to hell — as many claimed?

“I have no idea what people mean,” Bell said. “That just seems like stuff church people sit around and think about. Does God love everybody? Yeah.”

Many evangelicals are suspicious of Oprah, leery that she represents what many see as the worst of self-help spirituality. Bell, not surprisingly, disagrees once again.

“She has taught me more about what Jesus has for all of us, and what kind of life Jesus wants us to live, more than almost anybody in my life,” Bell said.

“Is she a Christian? That word has so much baggage, I wouldn’t want to answer for someone. When Jesus talks about the full divine life, you think, this is what he’s talking about.”