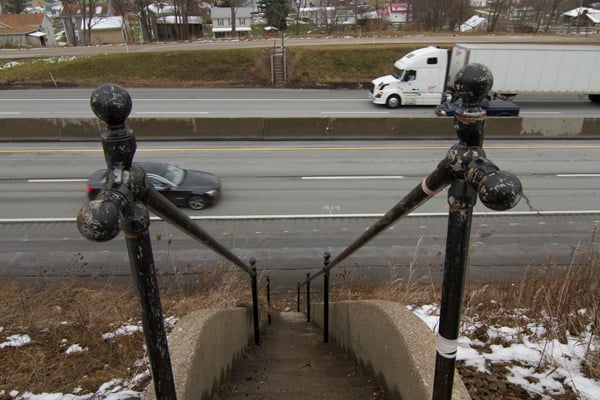 Steps in the foreground are accessible from the eastbound lanes of the Pennsylvania Turnpike and lead to the St. John the Baptist Catholic Church in New Baltimore, Pa. Steps in the westbound lane, in the background, lead to an abandoned roadway that leads to a bridge across the turnpike. New Baltimore is in the background. Photo by Richard Dedo
December 5, 2014
Maryann Eidemiller

NEW BALTIMORE, Pa. (RNS) For nearly 75 years, drivers between the Somerset and Bedford exits on the Pennsylvania Turnpike could park their cars on the berm and walk up the steps to St. John the Baptist Catholic Church.

But the days when the “Church of the Turnpike,” as it's known, served as a beacon to road-weary travelers, could be numbered. East of New Baltimore (population 180), heavy equipment signals the start of a highway widening project that will permanently remove the legendary steps.

“It’s a beautiful church,” said Mary Dow, who along with her husband, Don, has stopped for Mass at St. John on the couple’s trips from Michigan back home to North Carolina. “When the steps are gone, we’ll have to find another way there.”

It was founded by settlers from Baltimore who wanted to start a Catholic congregation in this southwest corner of Pennsylvania about 90 miles east of Pittsburgh, and who built a log church in 1820. Seventy years later it was replaced by the present church and a Carmelite monastery (now a retreat center).

The church features rich wood and hand-carved accents, a beautiful staircase to a loft, and 14 Tiffany stained-glass windows.

“The view from the open doors is breathtaking,” a parishioner proudly proclaims to visitors. St. John the Baptist Catholic Church, known as the "Church of the Turnpike," sits on a hill overlooking the village of New Baltimore, Pa.. Photo by Richard Dedo

The mountains loom ahead, and the town, with its 60-some houses, bar, post office and covered bridge, is nestled in the valley below.

In 1937, the Rev. Sebastian Joseph Urnauer cut a deal with the Pennsylvania Turnpike Commission. In exchange for some of the land in the church cemetery, the commission would build steps up from the road.

No such deal is possible now because of safety regulations but the Rev. Richard Tomkosky, the church’s current pastor, gave an optimistic assessment of the changes.

It will be another two or three years before the steps leading up to the church are removed, he said, and GPS navigation may help road travelers find the right exit once that happens.

“At this point, it’s not really a factor,” he said.

The guestbook, which features comments from all over the country, tells another story, as do a handful of drivers who pop in for Mass every weekend.