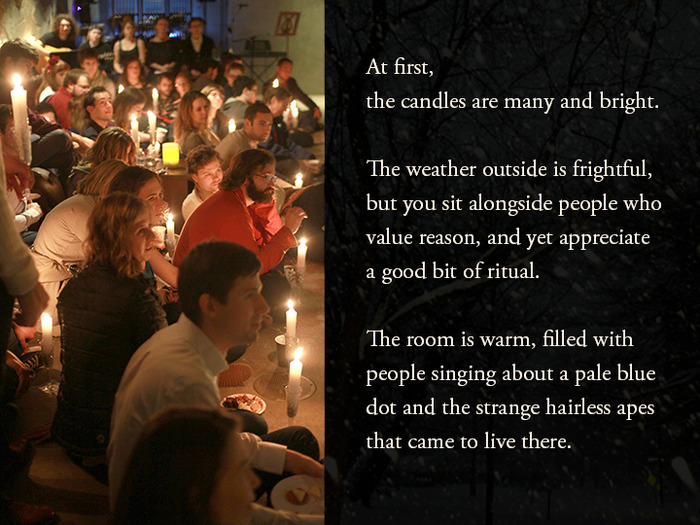 A publicity shot for “Secular Solstice,” a newly minted December observance for atheists, humanists and other freethinkers that features candles, readings, music and an emphasis on human beings’ capacity to improve the world. Photo courtesy of Raymond Arnold

OAKLAND, Calif. (RNS) It’s a common ritual in religious observances this time of year: Light a candle against the darkness, the winter, the uncertainty of the world.

But a newly minted observance called Secular Solstice adds its own spin. Those lighting the candles are nonbelievers — humanists, atheists, skeptics and other freethinkers — and the candles represent no unseen divinity, but the actions and intentions of those who light them to make the world a better place.

“We live in a world beyond the reach of God,” one of the service’s many readers said as 130 or so people gathered huddled over white candles in glass votives at Humanist Hall — a purple-painted house near downtown Oakland. “It is a hard universe. If we want to build a softer universe we will have to do it ourselves.” As a choir broke into “Here Comes the Sun,” an inscription painted on the wall beamed down upon the gathered, “The world is my country, to do good is my religion.”

Secular Solstice is the handiwork of Raymond Arnold, a 28-year-old Catholic-turned-humanist who wanted to do something meaningful with friends in mid-December. He put together the first Secular Solstice — a two-hour blend of music and readings by candlelight — last year in New York, where he works as a web developer.

It included moments of hilarity as well as deep seriousness. The crowd — almost entirely white and most seemingly under 30 — sat quietly with candles in their laps as a long string of speakers shared their own struggles with the suicide of loved ones, their encounters with death and their realization that the universe is vast and uncaring.

The readings and testimonies were punctuated here and there by Arnold, a slight young man in a scarlet dress shirt, rousing the crowd to sing along to “Deck the Halls,” “Let it Snow” and other songs. Singing together is a main focus of the event. 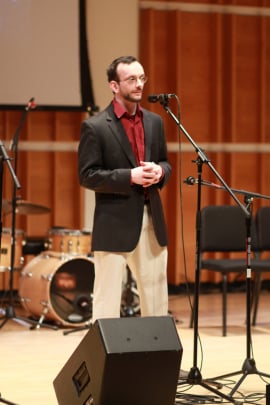 “When we sing with each other we forget ourselves and find a sense of belonging,” Matthew Elder, the night’s music coordinator, told the capacity crowd. “The feeling of belonging is an intensely powerful thing, to lean into that sense of belonging, so let’s sing together.”

Secular Solstice is another in a recent series of atheist-humanist events that look something like church. Sunday Assembly, a weekly morning gathering that started in London and spread quickly across the U.S., Canada and Europe, features uplifting talks and popular music. HumanLight is a December holiday promoted by humanist organizations that includes a ring of candles a lot like an Advent wreath.

Arnold is aware of the similarities to religion and embraces them.

“We are trying to accomplish a similar thing — gathering together as a community to  talk about the things that are important to us,” he said.

A Catholic church’s midnight Mass or a Protestant church’s “lessons and carols” service may have a similar goal but a different worldview, one that places God at the center of all things.

Altair, 26, helped organize the Oakland event. He attended a Secular Solstice held last year in a private home in San Francisco and immediately knew he wanted to help bring the event to a public space in the Bay Area this year.

“It was seeing so many people who truly care about the same things I care about” such as rationality and working toward a just society, he said. “I feel like the multifaceted, rational communities that are around here have a lot to celebrate and don’t have a lot of ways to celebrate them.”