VATICAN CITY (RNS) The Vatican ended a six-year inquiry into U.S. nuns with a report designed to bury their differences and celebrate their contribution to the Catholic Church.

Known as an Apostolic Visitation, the inquiry took place between 2009 and 2012 and included a questionnaire, personal interviews and visits to around 90 religious institutions across the United States.

The results of the inquiry were released by Cardinal Joao Braz de Aviz, who heads the department responsible for consecrated life, and three senior U.S. nuns at the Vatican on Tuesday (Dec. 16).

“Since the early days of the Catholic Church in their country, women religious have courageously been in the forefront of her evangelizing mission, selflessly tending to the spiritual, moral, educational, physical and social needs of countless individuals, especially the poor and marginalized,” the Vatican report said. 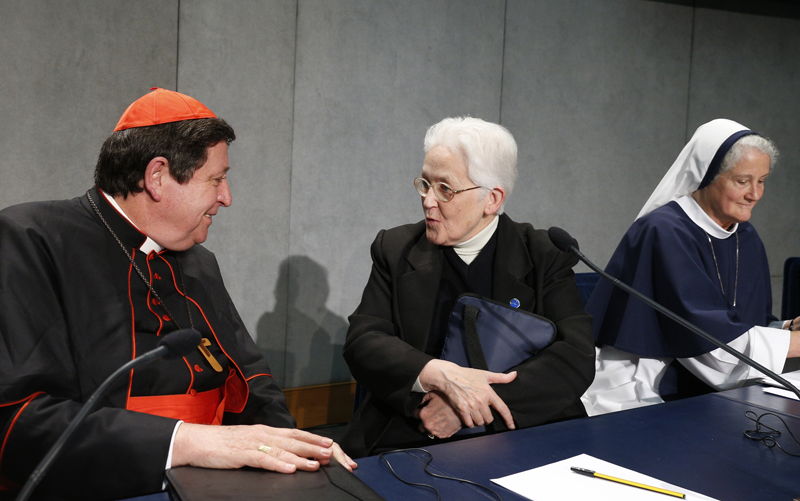 Brazilian Cardinal Joao Braz de Aviz, prefect of the Congregation for Institutes of Consecrated Life and Societies of Apostolic Life, speaks with Sister Sharon Holland, center, president of the Leadership Conference of Women Religious, at the conclusion of a Vatican press conference for release of the final report of a Vatican-ordered investigation of U.S. communities of women religious on Tuesday, December 16, 2014. Also pictured is Sister Agnes Mary Donovan, far right, coordinator of the Council of Major Superiors of Women Religious. Photo by Paul Haring, courtesy of Catholic News Service

The inquiry was ordered under Pope Benedict XVI after concerns arose about a so-called secular mentality among U.S. nuns.

While Vatican officials noted that 266 superiors general (or 78 percent of the total) had participated in the visitation, they did not say how many of America’s 50,000 nuns or religious institutes declined to respond to questionnaires.

“We are aware that the Apostolic Visitation was met with apprehension by some women religious,” said Braz de Aviz. “While this was a painful disappointment for us, we use this present opportunity to express our willingness to engage in respectful and fruitful dialogue with those institutes which were not fully compliant with the visitation process.”

The investigation is one of two Vatican studies that have provoked widespread anger among  members of the Leadership Conference of Women Religious, an umbrella group representing the majority of U.S. nuns. They feared an attempt to bring them under the authority of the Holy See’s male-dominated Catholic hierarchy.

The report noted a closer alignment with Pope Francis, stating U.S. nuns “can resonate” with Francis’ insistence that “none of us can think we are exempt from concern for the poor and for social justice.”

Sister M. Clare Millea, the American nun charged with overseeing the nationwide visitation, insisted it offered many opportunities for “reflection, dialogue and communion” among women religious, pastors and the faithful.

“Congregation leaders, including those who expressed resistance initially to this initiative, have shared that the process has yielded surprising positive results,” she said.

Millea fought back tears several times during Tuesday’s media conference and later said: “It’s a very moving moment for me. I deeply love religious life and I gave three years of my life to the revitalization of religious life in my country.”

Sister Sharon Holland, president of the LCWR, who also attended the Vatican media conference, said her members would be “affirmed and strengthened” by what she called an “honest report,” while stressing it was not a “document of blame.”

Asked if it defused the differences between the Vatican and her members, she said: “It is not a truce. We are not at war.” She also acknowledged that Francis was having a positive effect and a “certain freshness” in the church.

Nevertheless, the Vatican inquiry revealed dramatic structural change in the number and age of women religious as well as financial hardship within U.S. religious institutions.

Total numbers have dropped to fewer than 50,000 this year, according to the Center for Applied Research in the Apostolate at Georgetown University. There were 181,000 nuns in 1966.

Still to come: a separate inquiry into the LCWR begun by the Congregation for the Doctrine of the Faith in 2009. The LCWR, led by Holland, is the main association for the leaders of women’s orders representing around 80 percent of nuns in the U.S.