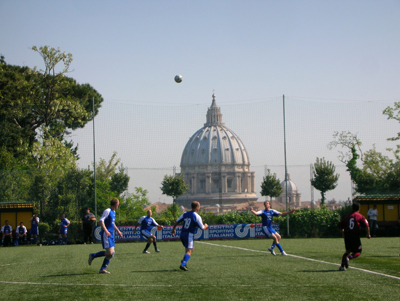 Members of the Pontifical North American College soccer team (in blue) play the Pontifical Gregorian University in Rome in 2007, with St. Peter’s Basilica in the background. The teams
are participants in the Clericus Cup, which lost its Vatican sponsorship. Religion News Service photo by Francis X. Rocca.

VATICAN CITY (RNS) Major sporting events could be held at the Vatican if Rome wins its bid to host the Summer Olympics in 2024.

Pope Francis, a keen soccer fan, is reported to be enthusiastic about the idea. He is expected to meet the head of Italy’s National Olympic Committee, Giovanni Malago, and other officials at the Vatican on Friday (Dec. 19) after a Mass to commemorate the committee’s 100th anniversary.

Cardinal Jose Saraiva Martins, former head of the Congregation for the Causes of Saints, said he believed Francis would back plans to hold events such as archery in the Vatican gardens.

He told the Florence daily La Nazione that events could also be staged at the pope’s summer palace at Castel Gandolfo outside Rome.

“It seems like a good idea, I think the pope will approve,” Saraiva Martins said.

“The church has always defended sport because its values are not only Christian but universal. It teaches you how to put human values such as compromise and collaboration in practice overcoming division.”

He said he would like to see Olympic soccer matches played at the Vatican, “as it is a great passion of mine as well as the pope.”

Rome’s ambitious bid to host the 2024 Games immediately provoked fierce debate as the city’s administration has recently been rocked by a mafia corruption scandal and the country is struggling to emerge from Italy’s longest postwar recession.

Francis is an enthusiastic supporter of the Buenos Aires football team, San Lorenzo, and blessed “the diplomacy of cricket” when a Vatican team played an Anglican team for a special match in September.

Monsignor Sanchez de Toca y Alameda, undersecretary of the Pontifical Council of Culture, said the Vatican’s sports and culture officials had enthusiastic discussions about the Olympic bid with members of the Italian Olympic Committee, but he stressed that no concrete commitments have been made at this stage.

Vatican officials emphasized privately that it would be difficult to envision many events inside the Vatican as the city state spans only 110 acres and space is very limited.