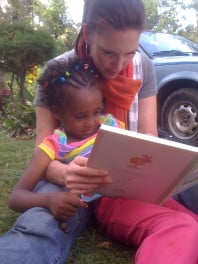 (RNS) Before she and her husband adopted a son and daughter from Ethiopia, popular evangelical blogger Jen Hatmaker said she had a different view about race in America.

“A couple years ago, I would’ve said we’re moving to a post-racial society because I was so under-exposed to people of color and the issues they deal with on a daily basis,” said the white Christian author, whose home renovation to make space for their growing family of seven was recently featured on HGTV.

As evangelicals have turned their attention toward adoption in the past decade, families like the Hatmakers are grappling with race relations in a profoundly personal way, especially as national news spotlights racial tension in New York; Ferguson, Mo., and elsewhere.

And evangelicals aren’t alone: A new Gallup poll found that 13 percent of Americans believe racism is the country’s most important problem, the highest figure since the 1992 verdict in the Rodney King case sparked riots in Los Angeles.

And, as Gallup noted: “After barely registering with Americans as the top problem for two decades, race relations now matches the economy in Americans’ mentions of the country’s top problem, and is just slightly behind government (15 percent).”

That same Gallup poll also found that nonwhites are more than twice as likely as whites to call race relations or racism the country’s most important problem.

As the Hatmakers’ son Ben, 11, creeps closer to the ages of Trayvon Martin and Michael Brown — unarmed black teenagers whose deaths have put race into a national conversation — the family talks about race more frequently. Her son learned about America’s racial history in public school during Black History Month in February.

“Every time we talk about it, there are tears, there’s confusion,” said Hatmaker, who said her son lives in a “no man’s land” because he’s black but not necessarily African-American. “He didn’t understand he was coming into a culture with a racial bias.” As the wife of a pastor, Hatmaker said her Austin, Texas, church of about 600 people is filled with an estimated two or three dozen adoptive families, including many who have adopted interracially. She and a number of female evangelical leaders and Bible teachers who have adopted interracially, like fellow Austin-based author Jennie Allen, are mulling ways to use their influence to discuss race.

“We have to do the humble hard work of listening,” Hatmaker said. “We serve a God of justice and equality, and I’m anxious to see the transformation he’s prepared for us in our culture right now.”

Perhaps more than most religious groups, white evangelicals have a complicated history with race: The Southern Baptist Convention was born with a defense of slavery, and many Southern Christians upheld Jim Crow laws. Even as more recent generations of evangelicals began to oppose racism, sociologists Michael Emerson and Christian Smith’s 2001 book, “Divided by Faith,” found that most white evangelicals see no systematic discrimination against blacks.

Kathryn Joyce, author of “The Child Catchers,” who has raised questions about evangelical adoptions, has been surprised by the number of conversations about race on adoption forums. 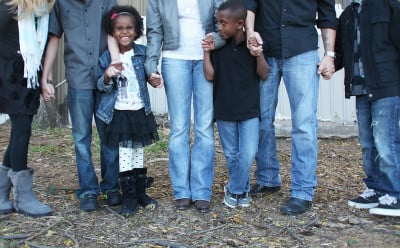 “Self-critique is happening with a lot of conversations focusing on big issues like racial justice, social justice, class, privilege,” Joyce said, saying she first heard about Martin’s 2012 death on an evangelical adoption forum.

“These parents, mostly moms, were thinking about race early on because they had this personal connection.”

To be sure, Christians have cared for orphans for centuries, but the most recent wave of interest came alongside the focus on the global HIV/AIDS crisis, a shrinking world with the increase of technology and well-known Christians becoming adoptive parents, like musician Steven Curtis Chapman and retired megachurch pastor John Piper.

Piper, a white pastor who grew up in the segregated South and has spoken on his own history of racism, now has an adopted daughter who is black.

“Nothing binds a pastor’s heart to diversity more than having it in his home,” Piper wrote in his 2011 book, “Bloodlines.”

In any given week, especially when there’s a flashpoint in the culture, Southern Baptist leader Russell Moore says he now hears from white evangelical parents of black children who have concerns about race.

“If anything, adoption exposes evangelicals’ weaknesses as well as strengths,” said Moore, who is white and adopted two white children from Russia. “In any given month, I’m dealing with a couple adopting a child of another race dealing with relatives who object, sometimes in nakedly racist terms.”

Adoption has forced evangelicals to reconsider all manner of issues, from poverty to race to health and international relations, Moore said. 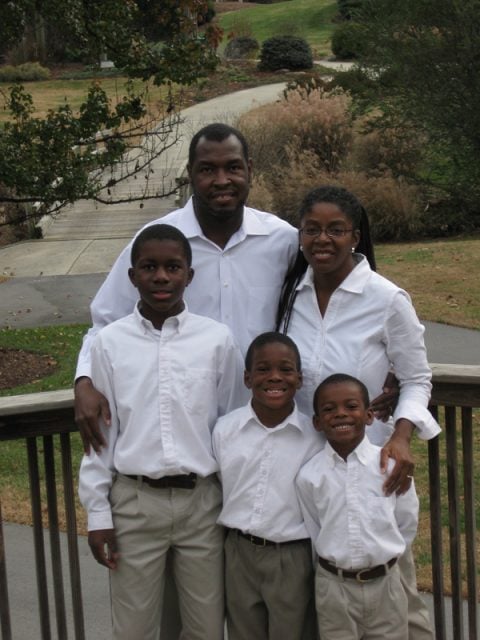 “I’ve seen predominantly white churches that have become more intentional about reaching out to African-American communities because now the ethnic barrier has been broken within the church,” said Moore, who is president of the Southern Baptists’ Ethics and Religious Liberty Commission.

“People who previously assumed that racial prejudice was back in the Jim Crow era are awakened by it with their own kids.”

Interracial adoption can be fraught with unseen road bumps, as some white parents find themselves navigating cultural differences. Linda Hargrove, a black mother of three black adoptive children who lives in North Carolina, said she encourages her white friends who adopt to go the extra step with their children, like helping their black daughters do their hair with up-to-date styles.

“It gets me when anyone says love is colorblind,” Hargrove said. “You want to be able to help them to do well in life, to be aware that some people might treat you differently.”

The colorblind mentality can be prevalent in evangelical churches, said Jaeran Kim, who was adopted into a white evangelical family and is researching evangelical adoption while working on her Ph.D. from the University of Minnesota.