VATICAN CITY (RNS) Pope Francis launched a blistering attack on the Vatican bureaucracy on Monday (Dec. 22), outlining a “catalog of illnesses” that plague the church’s central administration, including “spiritual Alzheimer’s” and gossipy cliques. After linking war and capitalism together in remarks made to La Vanguardia in June 2014, The Economist accused Pope Francis of “following Lenin.”

The pope’s traditional Christmas greeting to the cardinals, bishops and priests who run the Holy See was more “Bah! Humbug!” than holiday cheer as he ticked off a laundry list of “ailments of the Curia” that he wants to cure.

In a critique that left many of the assembled clerics clearly uncomfortable, the 15 ailments in Francis’ “catalog of illnesses” reflected the take-no-prisoners approach he promised when he was elected nearly two years ago as an outsider with little direct experience in Rome.

“The Curia is called upon to improve itself, always improve itself and grow in communion, holiness and knowledge to fully realize its mission,” the pope said.

“Yet like every body, like every human body, it is exposed to illnesses, malfunctioning, infirmity. They are illnesses and temptations that weaken our service to God.”

In a separate address to Vatican staff later, Francis begged pardon for the “shortcomings” of senior church leaders, as well as the “several scandals” that had “caused so much harm,” without specifying which scandals he had in mind.

The pope denounced the lust for power of ladder-climbing clerics, those who indulge in hypocritical double lives, and lamented a sense of “spiritual Alzheimer’s” that leads clerics to forget the joy that is supposed to animate their lives.

He also attacked what he called “existential schizophrenia” and the “terrorism of gossip.” He was especially critical of cliques that “enslave their members and become a cancer that threatens the harmony of the body,” eventually leading to death by “friendly fire.”

“These and other maladies and temptations,” Francis said, “are a danger for every Christian and for any administrative organization, community, congregation, parish, ecclesial movement, etc., and can strike at both the individual and the corporate level.”

The pope signaled early on that he aimed to overhaul and upend the church’s institutional culture; now 78, many had expected Francis to have a relatively short term in office, but he seems intent on using whatever time he has to set policies in ways that will outlive his papacy.

Francis has previously criticized the careerism and power intrigues that afflict those who work inside the Vatican. In elevating his first round of cardinals earlier this year, he warned the new princes of the church that they should not imagine they had joined a “royal court.”

As he and senior cardinals press ahead with controversial financial and administrative reforms, the pope seemed even more outspoken as he highlighted his concerns about the institution.

“It’s nice to think of the Roman Curia as a little model church, that is a body that every day seeks to become more unified and harmonious,” the pope said.

“In reality the Curia is a complex body … with different elements that don’t have the same job, but are coordinated to work in an exemplary, disciplined effective way, despite the cultural and linguistic diversity of its members.” 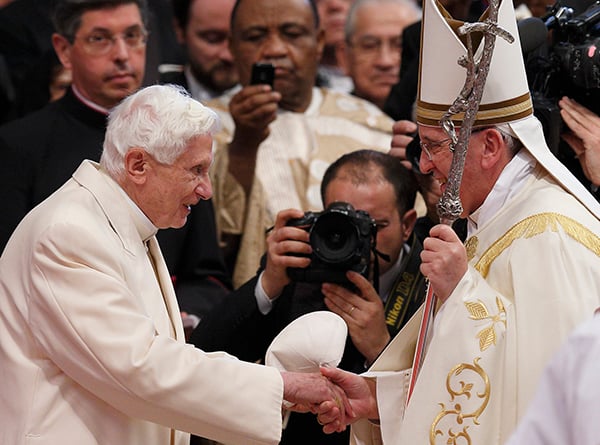 Francis, the first pope from Latin American, never worked in the Italian-dominated Curia before he was elected in March 2013 after the shocking resignation of his predecessor, Benedict XVI. The final months of Benedict’s pontificate were overshadowed by the so-called “Vatileaks” scandal in which Benedict’s personal butler leaked sensitive documents alleging corruption in the Curia.

Francis is also the first Jesuit pope, and his outsiders’ critique reflects the sometimes tense relations between Rome and the church’s largest religious order, which often chafes at directives from church headquarters.

The pope’s address reportedly startled assembled members of the Curia. Few were smiling as Francis ticked off his diagnosis, complete with footnotes and biblical references.

At the end of his speech, he asked the prelates to pray that the “wounds of the sins that each one of us carries are healed” so that the Church and Curia itself are made healthy.