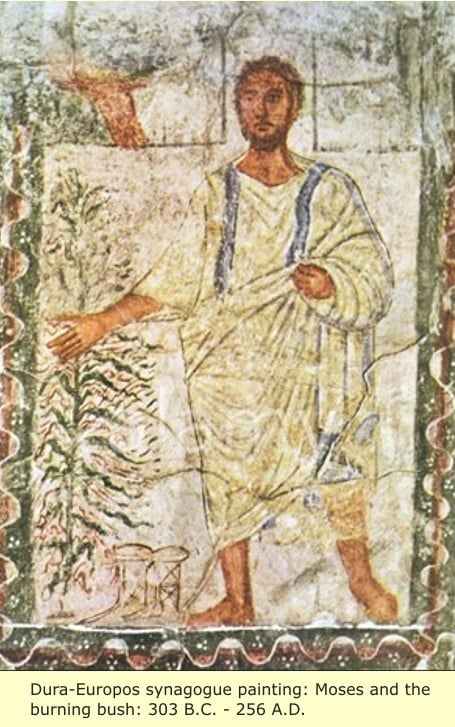 Moses at the burning bush, painting from Dura-Europos synagogue

Over the weekend Egypt and Morocco banned Ridley Scott’s biblical epic “Exodus: Gods and Kings” for reasons that, on their own terms, are pretty weak. I saw the movie Saturday night, and here’s my assessment.

Naturalism. Mohammed Afifi, the head of Egypt’s supreme council for culture, attacked “Exodus” for showing the parting of the sea “as a tidal phenomenon” rather than a divine miracle. As tidal phenomena go, this one was tsunami scale, but yes, Scott does his best to portray the miraculous in naturalistic terms. No rods are turned into snakes, for example.

Representation of God. In Morocco, the film’s distributor said he’d been informed that “Exodus” couldn’t be shown because “it represented God” in the form of a “child who gives a revelation to the prophet Moses.” It’s true that a rather grim-looking boy appears to Moses at the burning bush and periodically thereafter, but as the Moroccan distributor, Mounia Layadi Benkirane, noted, “The child through whom Moses receives the revelation in the film at no time says he is God.”

Indeed, the child is at one point identified as a “messenger” — pointing directly at the “angel of the Lord” (malach Adonai) who appears to Moses in the burning bush in Exodus 3:2. Of course, traditional Islam is opposed to the representation not only of God (and Muhammad) but of all animate beings, lest that lead to idol-worship. As idols go, I found Christian Bale less compelling as the Jewish prophet in “Exodus” than as the Jewish grifter in “American Hustle,” but that’s neither here nor there.

Historical inaccuracy. The head of the Egyptian state censorship board, Abdul Sattar Fathi, offered this enumeration:

One of the key historical mistakes made by this film is that it claims the Jews were the ones who built the Pyramids. The film treats Moses as an army general, not as a prophet. Furthermore, it shows ancient Egyptians as a mob group persecuting peaceful Jews. Our board has refused this out of respect for Egyptians’ feelings.

In fact, the film portrays the Jews working to build the city of Pithom, as the Bible says in Exodus 1:11. And it’s not an Egyptian mob that’s shown as persecuting them, but the Egyptian security apparatus. I suspect that might actually enlist the feelings of a lot of today’s Egyptians on their behalf.

As for the Jews (or Hebrews, since they haven’t yet established residence in Judea), they are not exactly peaceful. Before God decides to unleash the plagues, Moses undertakes a guerrilla war to liberate his people. There’s no evidence for that in the Bible, nor is there evidence that Moses served as an Egyptian general — fighting the Hittites, according to the film. But as far as historicity is concerned, it’s worth noting that the entire account of the Exodus has been called into question by contemporary biblical scholarship.

Zionist propaganda. Egypt’s minister of culture Gaber Asfourat, a professor of Arabic literature at Cairo University whose books include Countering Fanaticism and In Defense of the Enlightenment, claimed that the film “gives a Zionist view of history.” If so, it’s no more Zionist than the Qu’an’s view:

And so We inflicted Our retribution on them, and caused them to drown in the sea, because they had been heedless of Our messages. By contrast, to the people who [in the past] had been deemed utterly low, We gave as their heritage the eastern and western parts of the land that We had blessed. And [thus] your Sustainer’s good promise to the children of Israel was fulfilled in response to their patience in adversity. And We utterly destroyed all that Pharaoh and his people had wrought, and all that they had built. And We brought the children of Israel across the sea. (Sura 7:136-8)

Could it be that, in attacking “Exodus: Gods and Kings” as Zionist, the pro-Enlightenment Egyptian minister of culture was subtly criticizing the Qu’ran itself?