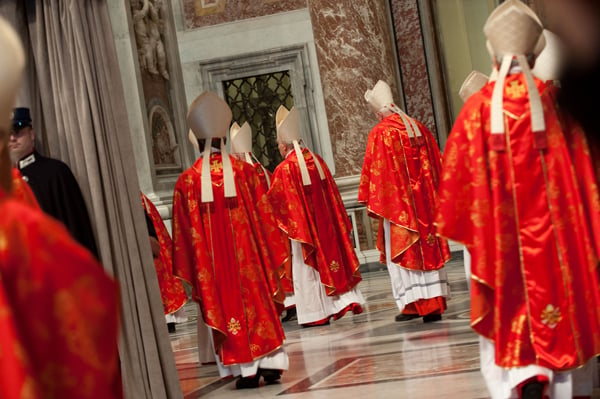 The clerics — who come from 18 different countries — include 15 who are eligible to vote for the pope’s successor in a future conclave, and five retired bishops and archbishops “distinguished for their pastoral charity” who are over age 80 and ineligible to select the next pontiff.

Dissatisfied with the slow pace of change in Rome, Francis has made appointments that reflect his desire for “pastors on the front line of difficult situations,” one Vatican observer said, who can bring a new perspective from the often overlooked outposts of global Christianity.

The Vatican’s chief spokesman, the Rev. Federico Lombardi, said the choices showed the pope’s most important criteria was “universality,” and indicated he was not “chained to tradition” as he moves the balance of power at the highest levels of the church closer to the developing world.

It is the first time ever that cardinals have been selected from Tonga, Myanmar and Cape Verde to become “princes of the church.” There are only five Europeans included among the 15 new electors — two from Italy and three others. The United States was shut out for the second time in a row.

Major Italian dioceses of Venice and Turin that were expected to get a red hat were also ignored, and only one cardinal was appointed from the Curia, the Vatican administration: Dominique Mamberti, head of of the Vatican’s highest judicial body, the Apostolic Signatura.

“You should note the fact that there is only one new cardinal from the Roman Curia while the Italian cardinals make up around a quarter of the electoral cardinals,” Lombardi said.

Pope Francis, who made clear within days of his 2013 election that he wanted a “poor church for the poor,” has now appointed 39 cardinals. There are now 228 men in the College of Cardinals, 125 of them young enough to enter a papal conclave.

His latest choices were such a surprise that even the new appointees were taken aback.

Edoardo Menichelli, archbishop of Ancona, a coastal town on Italy’s Adriatic Coast, said “ Are you pulling my leg?” when a colleague telephoned him to inform him of his appointment.

The other Italian appointed is Francesco Montenegro, archbishop of Agrigento, a small Sicilian town that has accepted waves of immigrants who arrive in Italy after making a perilous journey across the Mediterranean Sea.

Italian Interior Minister Angelino Alfano said the appointment was recognition of all that Montenegro had done to help thousands of refugees, and a sign of the pope’s focus on “charity and welcoming” them.

“The list appears to be a very personal choice of the pope,” said Andrea Tornielli, who follows the Vatican for Italian daily La Stampa. “It is clear that Francis wants to redesign the future conclave by putting in the College (of Cardinals) pastors on the front line of difficult situations, like Tonga and Myanmar on the outer reaches or regions wracked by violence like Morelia in Mexico.”

The new cardinals will be formally elevated during the next cardinals’ consistory in February.