Eric Metaxas made a splash recently with his Wall Street Journal op-ed on science and the existence of God. It was tailor-made for social media, with a title that could be shared without even being read. The headline said it all: Science increasingly makes the case for God.

But is it? The answer is of course, "no." And you don't need a Ph.D. in physics to argue against him. Take the article on face value. Fact-check the names. Metaxas does not present the work of scientists. The arguments he cites are not recent or signs of a change in science. Not even close.

No, what Metaxas does is cherry-pick a handful of people that he presents as evidence that science is "increasingly" questioning the plausibility of a creator.

This is an acceptable strategy if you're a lawyer or an apologist, but it's piss-poor scholarship. He presents his evidence as if these scientists both represent the larger scientific community. They are not. It turns out that only a couple of the "scientists" Metaxas quotes are actually in science, and even then they are on the fringe of science.

He also presents science as "recently" discovering more and more evidence that God must exist.

... it turns out that the rumors of God’s death [in 1966] were premature. More amazing is that the relatively recent case for his existence comes from a surprising place—science itself. 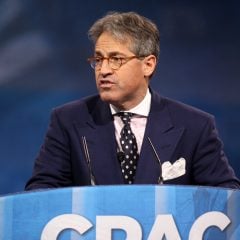 Metaxas offers no "recent case" for God -- even the "scientists" in the article formed their conclusions decades ago, closer to 1966 than to 2015.

Hoyle is mentioned as being the "the astronomer who coined the term 'big bang.'" Metaxas repeats this again in the YouTube clip above. Hoyle coined the term alright, but he did so as part of a 1950s radio series in which he disputed the theory that there was a beginning to the universe. Hoyle was one of the last to believe that the universe has always existed; there was no creator because there was no creation.

Hoyle didn't buy into the big bang, but he did believe that the building blocks for life and viruses came to earth via comets and meteors. Earth was too young to produce life, but maybe "superintellect" used carbon to form life throughout the universe. The large jumps in evolution resulted from meteorites bringing such life to earth.

Swine flue? The AIDS virus? Those are the most recent cases Hoyle claimed to have been extraterrestrial viruses.

Hoyle didn't come to his conclusions about "superintellects" or the big bang because of recent evidence. He was writing about them more than forty years ago.

Perhaps the strangest part of Hoyle's inclusion in the op-ed is that Metaxas writes that Hoyle was "greatly shaken" by "developments" that showed the unlikelihood of the universe forming in the big bang. No. This wasn't what mattered to Hoyle; he didn't think the universe had a beginning. Instead, as Metaxas reports in his book, Hoyle was surprised in the 1950s by the high levels of carbon found in the universe. Hoyle could have cared less about God forming the universe because the universe was never created. Hoyle did care about carbon, because that's what a "superintellect" could use to form life throughout the universe.

Schenkel isn't a scientist, at least not one that studies biology of physics. Still, Metaxas quotes a 2006 article by Schenkel as if he were an expert on the search for extraterrestrial life. He isn't. Schenkel's 2006 piece in Skeptical Inquirer introduces him as "a retired political scientist and author of many books, among them three on extraterrestrial intelligence: ETI: A Challenge for Change, The Message from Yon and Contact: Are We Ready For It?" Only one of these books (ETI: A Challenge for Change) is about science policy, and it was published through a vanity (or self-published) press 25 years ago. The other books are science fiction novels.

Putting aside Schenkel's lack of credentials (I can't even figure out where he was a political scientist), his questioning of ETI occurred decades ago. There is nothing recent about his conclusions.

Davies is the one scientist Metaxas discusses who supports the argument in the editorial. That's mostly because Davies is the one who came up with it. But Davies also knows that his fellow scientists (meaning nearly all of them) disagree with his conclusions. Davies has made more of a public argument for some type of creator over the past couple of decades, but this isn't because he discovered new evidence. As early as 1982, Davies examined the likelihood of the universe in his book The Accidental Universe. The Templeton Prize winner, like the others mentioned, did not come to this conclusion recently.

Metaxas describes Lennox as an "Oxford professor," which is accurate. He is not a scientist. He lectured in mathematics. He also works on ethics and Christian apologetics. But he is not a scientist. He did not come to his conclusion that there must be a creator by examining the evidence, he is one who interprets the evidence gathered by others as support for his religious views.

There is one point that Metaxas makes that should have alerted everyone that he was playing to his rhetorical skills rather than his mathematical ones. He states,

As factors continued to be discovered, the number of possible planets hit zero, and kept going. In other words, the odds turned against any planet in the universe supporting life, including this one. Probability said that even we shouldn’t be here.

Ok, so the number of possible planets is not just close to zero. It's not even zero. It's actually less than zero. That's right: the probability of us existing is not just really, really small. It's so small that it goes past never happening and into an imaginary world where probabilities can be negative. That is a miracle.

I can appreciate the difficulty of trying to communicate complex evidence into popular writing. That's what this blog is all about. And sometimes we need to make statements with less precision than we would in a peer-reviewed publication. Nuance is lost in the effort to make the main point clear. But what I can't support is an argument that makes a claim and then offers evidence that, on its face, is inaccurate.

I like my numbers to fit basic mathematical definitions. If I say something is "relatively recent" compared to 1966, then I would cite people who came to their conclusions closer to today than 1966. And, if I was going to say that "science" was doing something, then I would reference experts in the field, not academics who dabble in science on the side.

But then again, maybe this another reason why Metaxas gets a lot more "likes" on Facebook than I do.

All of this has nothing to do with the existence of God or a creator. This is about an argument claiming that science is "increasingly making the case for God." It isn't. Or, if it is, I haven't seen evidence for it yet. There is no reason to go into theological or philosophical debates about recent scientific evidence for God when there is no recent science being presented.