Michel Houellebecq’s book “Soumission” seen on display in a Gibert Jeune bookstore in Paris. Hours after the first copies of the book (“Submission” in English) appeared in bookstores, assailants stormed the office of Charlie Hebdo, gunning down a dozen people and unleashing a three-day bloodbath. Religion News Service photo by Elizabeth Bryant

PARIS (RNS) As France emerges from its worst terrorist attack in decades, a biting novel that imagines the country governed by Islamic law is part of a swirling debate about its basic values. Will the country respond to the shootings with fear and xenophobia, as suggested by the book “Soumission,” or “Submission” — or embrace its multicultural, multifaith identity?

On Sunday (Jan. 11), solidarity was on display as heads of state and religious leaders joined millions on the streets of Paris in a massive march for free expression and to honor last week’s victims from the satirical magazine Charlie Hebdo.

Along with “I am Charlie,” some protesters also chanted “I am Jewish” in tribute to the four men gunned down by one of the assailants at a kosher market.

Muslims carried signs saying, “I am Charlie and Muslim.” And on Twitter, thousands of French rallied behind “#JeSuisAhmed” — referring to policeman Ahmed Merabet, a Muslim, who also died in the attack on the magazine. 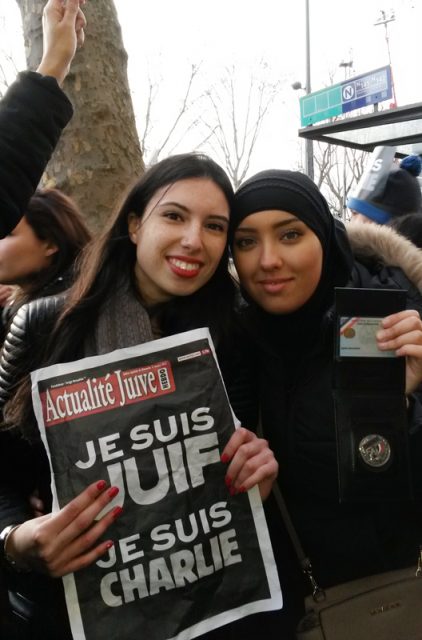 On the edge of the dense crowd, high school student Amina Tadjouri clasped a Jewish newspaper, as she stood next to a Muslim cleric railing against radical Islam.

“I’m Muslim, and I’m not OK with these killings,” she said. “Jews and Muslims refuse to be enemies. And we refuse to let people be killed for free expression. Everyone should be allowed to say what they want.”

Shortly after the Charlie Hebdo shootings, the novelist called off his book tour and ducked out of view. Through a friend, Houellebecq said he was “deeply affected” by the attack on the magazine — which, strikingly, ran his cartoon on its cover the day of the attack.

But “Submission,” which is expected to be published in English later this year, is still selling. At a bookstore in downtown Paris, Jacqueline Buades thumbed through a copy before heading to the checkout counter. “I’m interested in what he writes about Islam,” said Buades. “He’s acerbic and he’s provocative, which I like.”

Critics say Houellebecq’s books — like Charlie Hebdo’s religious cartoons — push the limits of free speech. He has been sued — and acquitted — for inciting racial violence, after having called Islam the “stupidest” faith.

His latest novel stirs long-held fears here about foreigners and Islam, and reflects the surging popularity of France’s far-right National Front party. Set in the year 2022, “Submission” describes a Muslim leader beating out the National Front in elections to capture the French presidency.

For some mainstream Muslims, already fearful of a backlash after the shootings — there have been 21 attacks and other incidents against mosques in France and Corsica — the book represents a further insult.

“French Muslims are sick of being stigmatized; we’re tired of being the scapegoats for everything that happens,” said Abdallah Zekri, head of the National Observatory Against Islamophobia, an arm of the French Muslim Council. Noting that the U.S. elected Barack Obama as its first black president, “what’s the problem of electing a Muslim president in France?” he asked.

Houellebecq has defended his novel, which also takes a stab at leftist politicians and French society. In an interview with the Paris Review before its publication, he suggested his views on Islam have softened.

“The Quran turns out to be much better than I thought, now that I’ve reread it — or read it,” he told the magazine.

But observers say the book taps simmering anxieties and prejudices of French people such as Francklin Boulot.

“I’m afraid of Islam; it wants to destroy our society,” said Boulot, who joined Sunday’s rally not to defend multiculturalism but to protest the Muslim religion.

Such sentiments suggest the rare unity on display on French streets and in cyberspace in recent days may be crumbling already.

“I hope we are able to turn the page” on last week’s attacks, said Islam expert Franck Fregosi. “But anti-Muslim sentiment exists in French society, and I fear this drama will make it worse.”