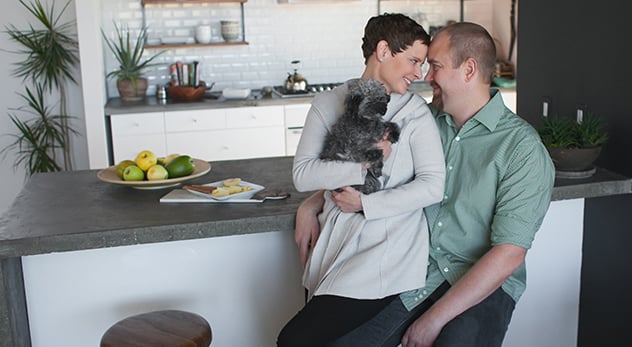 Margaret Feinberg’s books have sold nearly a million copies and she speaks to tens of thousands annually, but the popular personality couldn’t find the words to talk about breast cancer. Now she is sharing the horrific details of her battle. – Photo credit: Audrey Hannah

These are just a few of the many terrors that Margaret Feinberg hid from the public after receiving a breast cancer diagnosis in 2013 before age 40. While the popular Christian author’s books have sold nearly a million copies and she speaks to more than 80,000 people each year, she couldn’t find the words to share this part of herself.

“I felt shame after the diagnosis, wondering if I had somehow brought it on myself,” she said. “And I felt a little embarrassed since it involved my female body parts.”

With the weight of her secret mounting, Feinberg sought the advice of Matt Chandler, the prominent pastor of the 11,000-member Village Church in Flower Mound, Texas, and a recent cancer survivor himself.

Chandler said she had two options: Round up the wagons and tell no one, or invite her readers into the journey. She decided to test the waters of the second option, but the results were not what she’d hoped for.

“Many people were supportive and prayerful, but then there were those who filled our inboxes with unsolicited medical advice, stories of everyone they knew who had died from cancer, retribution theology and accusations that I had brought the cancer on myself because of a hidden sin or lack of faith,” Feinberg said. “Those kinds of comments are devastating when you’re in the fight of your life.”

The responses taught her “the church isn’t always a safe place to be when you’re sick.”

With half a dozen trade books and numerous Bible studies published for the popular “Women of Faith” network and LifeWay Christian Stores, Feinberg continued to tour the country to teach at churches and conferences — darting back to her home in Denver for chemotherapy in between trips. But she continued to conceal the cavalcade of agony from her readers and fans.

Feinberg has now decided to break the silence and share much of her battle in a new book, “Fight Back With Joy.”

In it, she shares dreadful side effects of treatment known all too well by cancer survivors:

“I had anemia, fatigue, rashes, irritable bowel syndrome, mouth sores, itchy eyes, ringing ears, vertigo, chest pain, receding gums, drilling headaches, even nerve pain that felt like electrocution coursing under my skin. They poisoned me until my toenails fell off and somewhere in there I experienced an early menopause. There was so much torturous pain.”

At her lowest point, Feinberg admits struggling to maintain the will to live.

“Once during treatment, I caught myself thinking, ‘I’d rather be dead,’” Feinberg said. “In those moments, if God would have let me die, I’d have been more than okay with that.”

Many Americas can relate to her struggle, and not just women. An estimated 1.66 million people in the U.S. received a cancer diagnosis in 2014 alone. Approximately 66 percent of them survived five or more years after the diagnosis.

But even those familiar with the disease may be surprised by the spiritual lessons Feinberg said she learned. The experience, she said, revealed the “crappy theology” and “tired teachings” held by many Christians that promise prosperity and a clean bill of health to the faithful. As a result, many Christians aren’t equipped to face such crisis.

“She’s always been a gifted Bible teacher,” said Christopher Ferebee, Feinberg’s agent for nearly a decade. “But there’s a new depth to her writing now that she’s faced this trial. When you can see God’s face in the abyss, it changes you.”

Feinberg decided to see the experience as an opportunity to rediscover a cornerstone Christian virtue: joy. Through participating in an ancient Jewish grieving ritual, she found joy in mourning. She attempted to impart joy to others by gifting red balloons to other patients in the hospital cancer ward and baking brownies for nurses. She even sang cheerful songs in CAT scan machines.

Through the experiment, she realized that Christians have misunderstood the Christian quality. While many Christians teach that joy is better than the circumstantial emotion called “happiness,” Feinberg says the two are inseparable.

And though it is tough to muster in times of suffering, deep joy is almost always accessible even if it looks different than we expect.

“Joy is far more than I ever thought or been taught,” said Feinberg, recently named by Outreach Magazine as one of the top young leaders shaping the American Christian church. “It’s a more dynamic, forceful weapon than most of us realize. When we fight back with joy, we lean into the very presence of God — the one who fills us with joy, even on our most deflated todays.”

She said she believes joy can be an effective armament to fight diseases such as cancer because it reduces anxiety. But she doesn’t think it is a replacement for proper medical treatment, which she credits with the success of her fight.

After more than a year of treatment and a double mastectomy, doctors have told Feinberg that she’s cancer-free. But she is well aware that it could return at any moment.

“I live in fear, but I’m not controlled by fear,” she said. “I’ve found my capacity for joy expanding against all odds.”