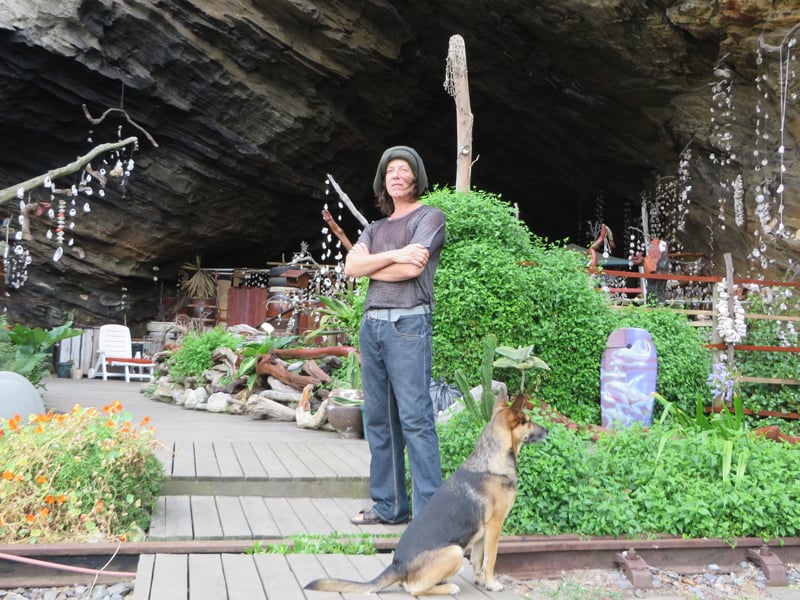 Cape Town native Clifford Brandon says God led him to this abandoned seaside shelter in Wilderness, South Africa, eight years ago, soon after mudslides destroyed the remote coastal pass. In that time he’s transformed the cave, originally known as Kaaiman’s Grotto, into a shelter for homeless Christians and a makeshift museum of trinkets. Religion News Service photo by Brian Pellot

CAPE TOWN (RNS) Past the beach, down the overgrown train tracks and through a darkened tunnel sits Clifford’s Cave.

Cape Town native Clifford Brandon says God led him to this abandoned seaside shelter in the town of Wilderness, South Africa, eight years ago, soon after mudslides destroyed the remote coastal pass. In that time, he’s transformed Kaaiman’s Grotto, as it was originally called, into a shelter for homeless Christians and a makeshift museum of trinkets. After a close call with death while working the streets of Cape Town, Brandon joined his brother’s ministry, an asylum for the homeless and people with substance abuse problems, in Vredenburg, Western Cape.

Several years of Bible study later, Brandon grew tired of “ministry, ministry, ministry, like a hamster on a wheel,” and prayed to God for his own home. Brandon says God told him to give away all his belongings and head to Wilderness on South Africa’s southern coast. Clifford Brandon enters a room through a door with a cross on it inside Clifford’s Cave. Religion News Service photo by Brian Pellot

“As I came through the tunnel, I saw the bridge and the cave, and my spirit leapt, and I knew this was the home that God had prepared for me from the beginning of time,” he said.

But Brandon wasn’t the cave’s first inhabitant. Just months before he arrived in 2006, Kaaiman’s Grotto was home to a popular restaurant and tourist stop on the coastal route between nearby George and Knysna. When heavy rains washed out the restaurant’s only access track, its owner, Johan Coetzee, had little choice but to close shop.

Soon after, Brandon found the cave barren and covered in bird droppings.

“When God brought me here there was nothing. I used to sleep on a table with a towel thrown over me and a sack of dirty clothes as a cushion. Then I started collecting shells and stones and driftwood and picking up little toys that washed up on the beach.”

Brandon says Coetzee agreed to let him “look after” the cave until the rails were repaired and the restaurant could resume operations. That was eight years ago. With tracks still in shambles and a halt on eviction notices from the train’s former operator, Transnet, Brandon says the cave is now his.

Each December, the start of South Africa’s summer, Wilderness awakens as tourists make the Garden Route drive between Cape Town and Port Elizabeth.

Eager to meet the caveman of local lore, in-the-know travelers stumble through Brandon’s maze of dimly lit rooms and offer small donations at the end of each tour. These tips sustain the resident cave dwellers, up to 14 of whom live with Brandon at any given time for periods ranging from a few days to more than a year.

“I take in homeless people because Father has given me a home,” Brandon said, referring to God.

“Father said: ‘This is a home for poor Christians, not the world’s children. They belong to the dark side. You have turned my home into a den of thieves. One day I will punish you for that,’” Brandon said. 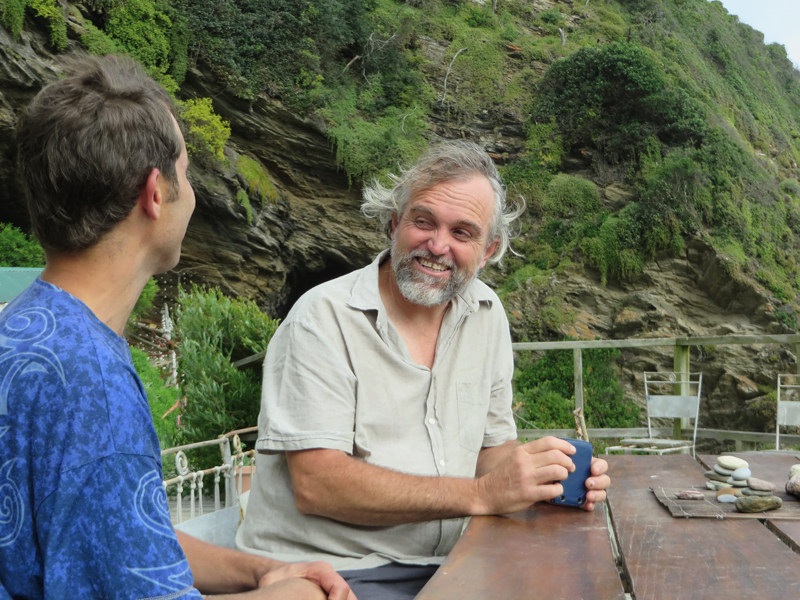 David Johnstone first came to the cave in 2008 and has lived with Brandon on and off for more than a year.  Johnstone currently has a bed in the cave’s holy section, reserved for Christians, behind a wooden door marked with an iron cross. But he says he’s not strictly Christian.

“I’m not a Christian exactly, but I follow God,” he said.  “Buddhism, Hinduism, everyone has the same ideals, unconditional love. I just try to be as good a person as possible.”

Johnstone says living in the cave has its perks. Temperatures remain relatively steady in winter and summer and the cave stays dry, forming a waterfall at its mouth during heavy rains. There’s no electricity, but excellent phone service.

“Clifford has a phone too, but he never turns it on. It just sits there like an ornament,” Johnstone said.

Brandon, who took up cave life before the smartphone revolution began in 2007, says he’s content without electricity. But there’s one gadget he’d like.

“There’s something I’m after at the moment. It’s about this thin,” he said, index finger and thumb nearly touching. “I think it’s called the iPad? You can take perfect photographs with it, just like a postcard.” Clifford Brandon reads the Bible every day in “Father’s Room,” a candlelit space at the grotto’s heart that doubles as his writing room. Religion News Service photo by Brian Pellot

Brandon hopes to one day sell his iPad photos and personal testimonies to magazines overseas. He reads the Bible every day in “Father’s Room,” a candlelit space at the grotto’s heart that doubles as his writing room.

Johnstone, who says the cave was only half-decorated when he first moved in, has watched Brandon build it into “this big palace kind of thing.”

“One man’s trash is another man’s treasure,” Johnstone noted, citing the apt cliché.

Gordon Van Coller, who is Christian, sometimes stays with Brandon when he’s not living indoors in nearby Great Brak River.

“This is a place for me to rest,” Van Coller said. “When I get out of my house and am not worried about money or survival I can just focus my attention on the Lord and his creation, the sea and the birds.  It’s a spiritual experience for me.”