MOSCOW (Reuters) Russian Orthodox Patriarch Kirill called on Thursday for a deep cut in the “horrifyingly high” number of abortions, which he linked to a Western rejection of moral norms. 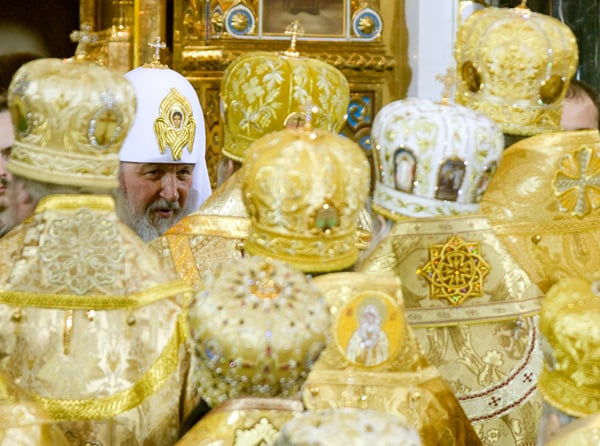 Orthodox Patriarch Kirill (L) receives congratulations from clergy after he was crowned as the 16th Patriarch of Moscow and all Russia in Moscow’s Christ the Saviour Cathedral, February 1, 2009. REUTERS/Sergei Karpukhin

“The idea of absolutely prioritizing the value of free choice and of rejecting the priority of moral norms has become a slowly exploding bomb for Western civilisation,” he said in a speech to lawmakers.

“If we could just cut in half the number of abortions, there would be steady and powerful demographic growth.”

Russia’s population has been declining since the mid-1990s, hit by falling birth rates and life expectancy in the chaos that followed the collapse of the Soviet Union. It currently stands at 142.5 million, compared with 148.7 million in 1991.

Kirill’s speech was described by state media as the first address by a head of the Russian Orthodox Church to the Duma, or lower chamber of parliament, in modern Russia.

It was a sign of the church’s growing influence under President Vladimir Putin, who has sought to champion conservative Russian values at a time of heightened tension with the West, especially over the conflict in Ukraine.

“Russia’s ability to stand up in the face of modern pseudo-values depends to a large extent on the active stance of Russian parliamentarians,” the black-robed patriarch said.