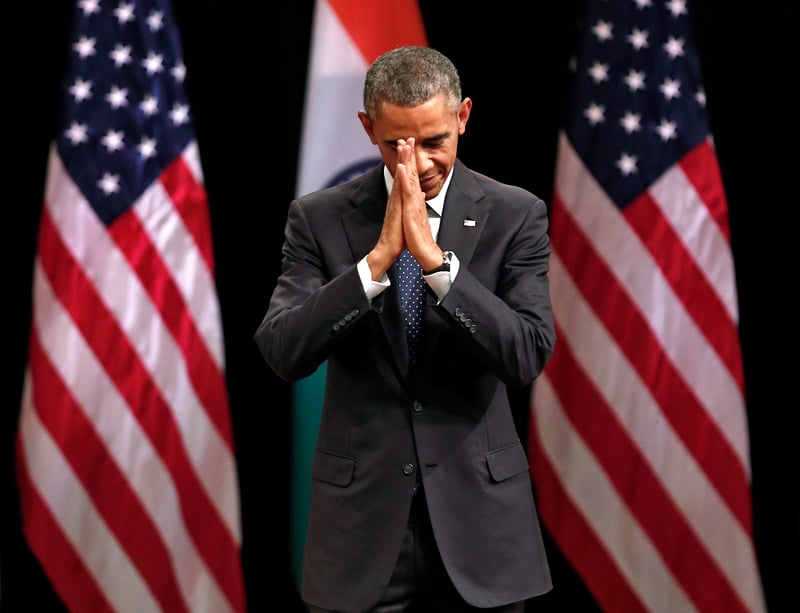 U.S. President Barack Obama folds his hands in a traditional Indian greeting after he addressed a gathering at Siri Fort Auditorium in New Delhi on Tuesday (January 27, 2015). Obama weighed in on one of India’s most sensitive topics as he wound up a visit on Tuesday, making a plea for freedom of religion to be upheld in a country where relations between Hindus and minorities have come under strain. Photo courtesy of REUTERS/Ahmad Masood
*Note: This photo may only be republished with RNS-OBAMA-RELIGION, originally published on January 27, 2015.

NEW DELHI (RNS) U.S. President Barack Obama weighed in on one of India’s most sensitive topics as he wound up a visit on Tuesday (Jan 27), making a plea for freedom of religion to be upheld in a country with a history of strife between Hindus and minorities.

Hours before boarding a flight to Saudi Arabia, Obama warned India not to stray from its constitutional commitment to allow people to freely “profess, practice and propagate” religion.

Obama’s speech, after three days in New Delhi aimed at cementing a strategic partnership, was widely interpreted as a message to Prime Minister Narendra Modi and his Hindu nationalist Bharatiya Janata Party (BJP), whose rise to power emboldened activists to declare India a nation of Hindus.

He made no direct reference to Modi, who was banned from U.S. travel for nearly a decade until last year after deadly Hindu-Muslim violence in a state he ruled in 2002.

Lately, religious conversion has again become a divisive political issue, after hardliners with links to the BJP claimed Hinduism was under threat and started a campaign to convince Christians and Muslims to change their faith.

About a fifth of India’s 1.27 billion people identify themselves as belonging to faiths other than Hinduism.

“The message is that India is a democratic country, it is not a Hindu country or a Christian country, it is all together, India has respect for all religions,” said Imam Umer Ahmed Ilyasi, a Muslim priest who heads the All India Imam Organization, after the speech. He was standing with a Hindu holy man from one of India’s pilgrimage towns, Rishikesh.

Modi has warned lawmakers from his own party to stop promoting controversial issues such as religious conversions and to focus on economic reforms, but Obama’s message was quickly seized by political opponents of the prime minister.

“I do hope that Prime Minister Narendra Modi was listening to the speech carefully,” said Manish Tewari of the opposition Congress party, criticizing Hindu activists for promoting a “majoritarian ethos that goes against the grain of liberal democracy.”

Obama and Modi’s relaxed manner together during the visit was dubbed a “bromance” in India media, after the two men shared tea in a lotus garden, recorded a radio show together, and spent two hours chatting at a rain-splashed military parade.

In between, they sealed deals to unlock billions of dollars in nuclear trade and deepen defense ties, and Obama pledged $4 billion in financial backing to release the “untapped potential” of a partnership between the world’s largest democracies.

Some of that financing is to help Modi meet his own ambitious goals to use more renewable energy, especially solar, as fast-growing India’s carbon emissions rise.

However, during the visit, India did not commit to a peak emissions target of the kind China and the United States agreed to in November.

“Here’s the truth: even if countries like the United States curb our emissions, if growing countries like India – with soaring energy needs – don’t also embrace cleaner fuels, then we don’t stand a chance against climate change,” Obama said.

On Monday, he became the first U.S. president to attend India’s annual Republic Day parade, a show of military might long associated with Cold War anti-Americanism.

Obama’s presence at the parade signaled Modi’s willingness to end India’s traditional reluctance to get too close to any big power. Instead, he is seeking close ties with them all, even as he pushes back against a more assertive China and take sides on other global issues.

A joint U.S.-India policy statement that focused on free navigation in the South China Sea highlighted this more muscular diplomacy.

Obama said the United States would stand first in line for the trade and investment opportunities that will spring from the economic reform drive under Modi.

“America wants to be your partner in igniting the next wave of Indian growth. As India pursues reforms to encourage more trade and investment, we’ll be the first in line,” he told the townhall, attended by Michelle Obama and Nobel peace laureate Kailash Satyarthi.

Praising the non-violence tenets of Mahatma Gandhi, Obama touched during his speech on the treatment of women, an issue that has troubled India since the horrific gang rape and murder of a student on a bus in New Delhi two years ago.

“Every daughter deserves the same chance as our sons,” he said. “And every woman should be able to go about her day – to walk the street, or ride the bus – and be safe and be treated with the respect and dignity. She deserves that.”