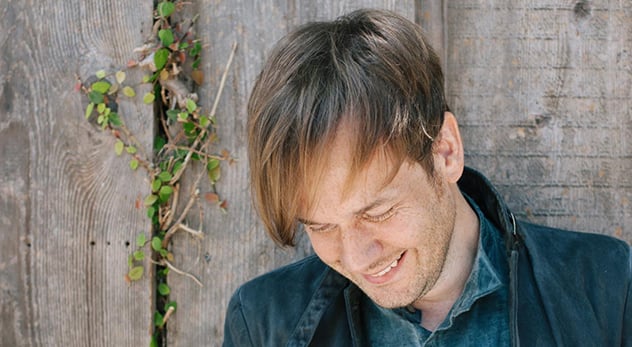 “In Jesus, we see a trickster figure, one who respects the beliefs and traditions of real people, yet also questions them, challenges them and subverts them for the sake of political and religious transformation,” says post-modern theologian Peter Rollins. – Image courtesy of Peter Rollins

Putting these names together might seem like a game of “One Of These Things is Not Like The Other,” but according to post-modern theologian Peter Rollins, it might make more sense than you assume. In his new book, The Divine Magician: The Disappearance of Religion and the Discovery of Faith, Rollins argues that the Christian event is like a “magic trick” and Jesus was a “trickster.” This (and much in the book itself) will make some traditional Christians uncomfortable, it may not be as offensive as they might assume. Here Rollins discusses his ideas and why he thinks they matter.

RNS: You say Christianity is like a magic act with three parts: the pledge, the turn, and the prestige. What are these three acts in short?

PR: A classical disappearing trick is made up of three parts. The first involves the presentation of an object. This has been called the Pledge. Then there is the Turn, this is the part of the trick in which the presented object vanishes before the eyes of the audience. Finally there is the Prestige. This names the point in the trick when the object reappears. Yet what returns isn’t what vanished. In the standard form of the trick what returns only looks the same as what vanished. The coin that vanished at the beginning is rarely the coin that returns at the end.

RNS: But those three parts of a “magic act” are really the parts of an “illusion act.” Nothing really changes in that kind of “magic.” But it seems that transformation is central to Christianity, so doesn’t that challenge your analogy a bit?

PR: Illusions are anything but impotent. The power of an illusion can, of course, be witnessed very clearly in the case of someone suffering from some form of psychosis. But illusion is a part of all our lives. From when we are young, we embrace illusions that profoundly affect us. Think of the small child imagining that they are a warrior, and in doing so, finding the strength to deal with a situation they might otherwise flee. Or in love, we experience the powerful illusion that the object of our desire is better than everyone else. The point of the book is to show that the subjective event called “conversion” reflects a transformation in our perception of the world and thus a transformation in how we live.

RNS: You say that the Christian”magic trick” is reenacted through the Eucharist. How do you understand what happens when Christians participate in this sacred meal?

PR: There is an interesting link between what early magicians where doing in their shows and what the Priest was doing during the Eucharist. Indeed, it is likely that the very term “Hocus Pocus” is a parody of what the Priest said during Mass when he uttered the Latin words, “hoc est copus.” Like the three part disappearing act, the Eucharist is composed of three acts. There is the Pledge where the sacred is offered as an object (i.e. – bread and wine). There is the Turn, where the sacred object disappears into our bodies. Finally there is the Prestige. This reflects the moment when we are to realize that the sacred has returned to us. Not as some special object, but as a depth dimension in mundane objects. In short, that the sacred is found in real flesh and blood. The sacred is no longer an object that we love, but that which we discover in the act of love itself.

RNS: You say humans search for a sacred object to make them whole. What do you mean?

PR: The sacred object is the object that we treat as offering us wholeness. It is that seductive thing in our lives that appears to sparkle with  promise, offering us freedom from our trauma. This is object that is not only a fiction but a dangerous fiction, a fiction that prevents us from doing the difficult work of facing our traumas and finding a way of bearing the full range of human emotions. Christianity is, for me, nothing less than the freedom from this sacred object. This is the pledge that must be made to vanish so that a different understanding of value can emerge. Not as an idea, but as a lived reality.

RNS: When people hear you say Jesus is a “trickster” figure, they may be offended. What does this mean and why is this helpful?

PR: Tricksters are revolutionary figures that challenge the natural order. They poke holes in what everyone takes for granted and fight systems that oppress. They work within a given religious or political system, but they wrestle with it, challenge it and transform it. In Jesus, we see a trickster figure, one who respects the beliefs and traditions of real people, yet also questions them, challenges them and subverts them for the sake of political and religious transformation.

Consider the example of Jesus supplementing the greatest commandment with a description of a second commandment that is just like the first, namely to love ones neighbor. Here we see that Jesus respects the common belief of the day—the existence of God and the need to love God—but also ruptures it by saying that one knows one loves God when one loves ones neighbors. This is not some atheistic critique of belief in which a person says, “forget God, love people.” It represents a type of working from within.

RNS: Part of the beauty of magic is that we don’t know how it works. Is there a parallel here to faith? How important is the mystery of faith to faith itself?

PR: If I’m not a magician I likely won’t know how a magic trick works, and that does give it a certain mystical appeal. But I still know full well that it’s a trick. If I didn’t know this, I would likely scream at the end of the illusion, rather than applaud. The knowledge that it is a trick does nothing to diminish my awe, indeed it might even enhance it. Knowing that a person has spent countless hours learning such an impressive skill is more amazing than thinking he was born with a supernatural gift.

RNS: This book is billed as a provocative and unconventional work along the lines of Rob Bells’ Love Wins. What will readers find most controversial?

PR: I am attempting to give the reader a frame for understanding why I reject the idea of Christianity as a worldview. For me, Christianity is not connected with some set of beliefs about the world, but rather is concerned with a way of being in the world. Christianity, in its subversive core, is not about belief in God, Jesus or the Bible, but is an invitation into a life where we take responsibility for our actions, face our suffering, kill our idols, and learn to embrace our anxiety. I’m arguing for nothing less than a fundamental reformation of Christianity. One that has no concern for whether you are a theist or an atheist, but that calls upon all of us to smash our false gods, whether they be secular or sacred. The future church that I am fighting for is one dedicated to helping people expose, accept and even celebrate  the impotence of whatever they believe will make them whole. Thus, removing the sting from our experience of death and finding better ways to live.