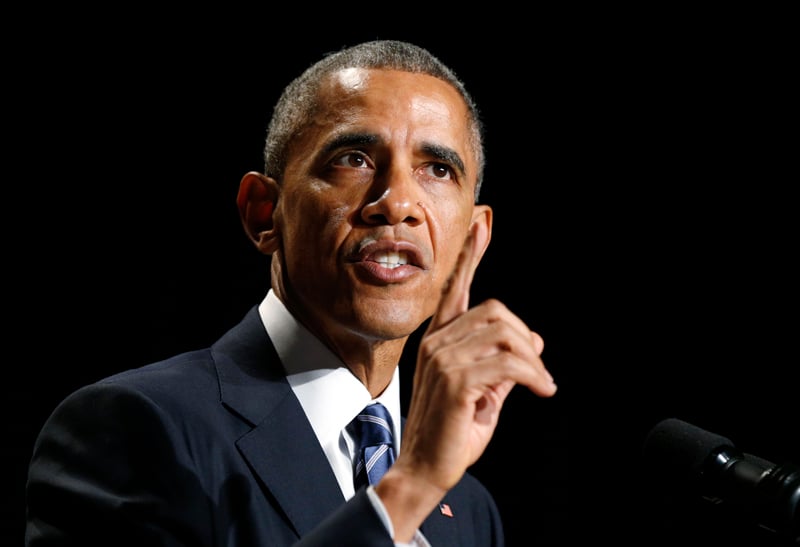 President Obama speaks at the National Prayer Breakfast in Washington on Thursday (Feb. 5, 2015). Photo courtesy of REUTERS/Kevin Lamarque
*Editors: This photo may only be republished with RNS-PRAYER-BREAKFAST, originally transmitted on Feb. 5, 2015.

WASHINGTON (RNS) President Obama on Thursday (Feb. 5) called for an emphasis on what is just about the world’s religions as a way to counter the ways faith has been distorted across the globe.

“We see faith driving us to do right,” he said to more than 3,500 people attending the annual National Prayer Breakfast. “But we also see faith being twisted and distorted, used as a wedge — or worse, sometimes used as a weapon.”

He urged believers of all faiths to practice humility, support church-state separation and adhere to the golden rule as ways to keep religion in its proper context.

“As people of faith, we are summoned to push back against those who try to distort our religion — any religion — for their own nihilistic ends,” Obama said. “Here at home and around the world we will constantly reaffirm that fundamental freedom: freedom of religion, the right to practice our faith how we choose, to change our faith if we choose, to practice no faith at all if we choose, and to do so free of persecution and fear and discrimination.”

Obama denounced the so-called Islamic State that is waging a bloody war across Syria and Iraq against fellow Muslims and religious minorities, labeling the group “a brutal, vicious death cult.”

The breakfast has often turned controversial, and this year was no exception with the inclusion of the Dalai Lama, the exiled spiritual leader of Tibetan Buddhism, who attended but did not speak and was not seated on the dais with other speakers.

Under pressure from China not to recognize the Nobel laureate, Obama nonetheless opened his remarks by welcoming the Dalai Lama, calling him “a powerful example of what it means to practice compassion” and someone who “inspires us to speak up for the freedom and dignity of all human beings.” 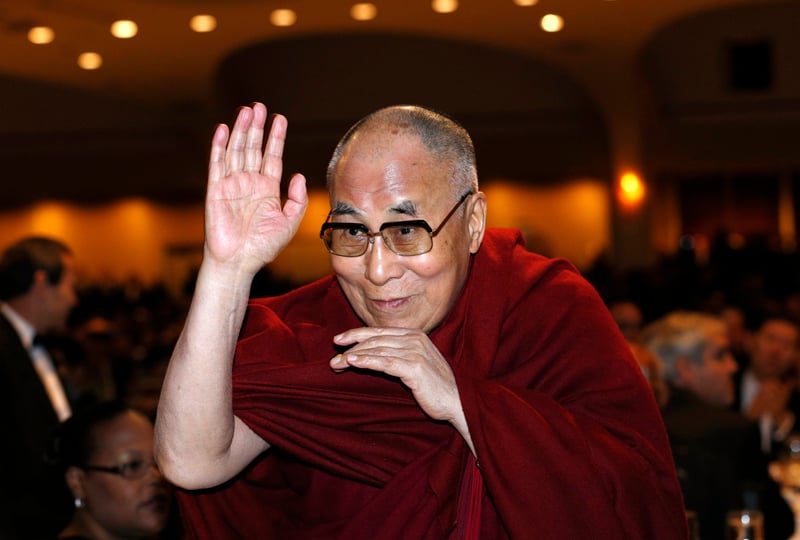 The Dalai Lama waves towards the head table, where U.S. President Barack Obama is seated, during the National Prayer Breakfast in Washington on Thursday (Feb. 5, 2015). Photo courtesy of REUTERS/Kevin Lamarque
*Editors: This photo may only be republished with RNS-PRAYER-BREAKFAST, originally transmitted on Feb. 5, 2015.

Chinese officials had criticized the Dalai Lama’s plans to appear at the event.

“We are against any country’s interference in China’s domestic affairs under the pretext of Tibet-related issues, and are opposed to any foreign leader’s meeting with the Dalai Lama in any form,” said Hong Lei, spokesman for China’s Ministry of Foreign Affairs, before the breakfast.

“I’m not a brain surgeon and I’m not running for office so I’m the perfect guy to be here this morning,” he said.

From a distance, Pope Francis joined Obama in calling for greater religious freedom.

“I ask you to pray for me and to join me in praying for our brothers and sisters throughout the world who experience persecution and death for their faith,” the pontiff wrote in a letter to attendees that was read in part by Sen. Bob Casey, D-Pa., who co-chaired the breakfast with Sen. Roger Wicker, R-Miss.

Following the recent deadly attacks on a French weekly that had published satirical cartoons of Islam’s Prophet Muhammad, Obama also spoke of the need to support both freedom of speech and freedom of religion.

“If, in fact, we defend the legal right of a person to insult another’s religion, we’re equally obligated to use our free speech to condemn such insults,” he said, drawing applause, “and stand shoulder to shoulder with religious communities, particularly religious minorities, who are the targets of such attacks.”

Obama expressed thanks for the safe return of Christian missionary Kenneth Bae, who was held in North Korea for more than a year, and recounted his recent meeting in Boise, Idaho, with the family of U.S. pastor Saeed Abedini, who remains imprisoned in Iran and has become a cause celebre for many evangelicals.

“We’re going to keep up this work for Pastor Abedini and all those around the world who are unjustly held or persecuted because of their faith,” the president said, noting that Rabbi David Saperstein, the new U.S. ambassador-at-large for international religious freedom, would be heading soon to Iraq to work with religious leaders there.

The breakfast, in its 63rd year, is chaired each year by members of Congress who meet weekly for prayer when Congress is in session. It draws politicians, diplomats and prominent evangelical Christian leaders but often includes an interfaith roster of speakers.

Rabbi Greg Marx of Maple Glen, Pa., gave the invocation and former Ambassador Andrew Young, once an aide to the Rev. Martin Luther King Jr. and a president of the National Council of Churches, gave the benediction.

Wicker read from the Gospel of Luke in place of the scheduled speaker, King Abdullah II of Jordan, reciting the story of the good Samaritan. Abdullah had to return home after a hostage crisis involving the Islamic State turned deadly.

“We all know the heartbreaking circumstances his country is experiencing at this point,” Wicker said. “Our prayers are with the people of Jordan during this troubling time of crisis.” News
For US teen Buddhist lama, it’s faith, school, football
Follow us on Facebook!
Submit your photos to RNS