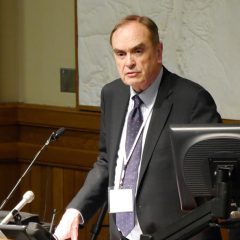 But for a group of faith leaders, drones are a crude tool of death that make killing as easy as shooting a video game villain, and they put innocents in harm’s way.

These religious critics — 150 ministers, priests, imams, rabbis and other faith leaders who gathered at the Interfaith Conference on Drone Warfare at Princeton Theological Seminary in late January — have spent the weeks since drafting a statement that calls on the U.S. to halt targeted lethal drone strikes.

“There are enough problems with the current drone policy and the use of drones that we need a break,” said the Rev. Richard Killmer, director of the conference. “Drones have become a weapon of first resort and not last resort. It has made it a lot easier to go to war.”

The statement also raises the group’s concern that most drone attacks target individuals who are Muslims. As the U.S. seeks to quell Islamist extremism in the Middle East, attendees argued, drones undermine the effort by inciting hatred toward the U.S., often viewed as a deadly presence in the skies over Muslim lands.

“It creates more radicalization and anti-Americanism,” said Sarah Sayeed, a conference attendee and director of community partnerships at the Interfaith Center of New York. “Killing leads to more killing.” 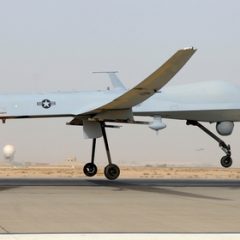 A predator drone takes off from Balad Air Base in Iraq.

In addition to a halt on drone strikes, the statement calls for:

Many of the same interfaith leaders who signed on to the drone statement gained attention in 2006 when they convened at Princeton to launch a campaign against American use of torture against suspected terrorists. Killmer is the former director of the National Religious Campaign Against Torture.

Benjamin H. Friedman, a research fellow in defense and homeland security studies at the libertarian Cato Institute in Washington, D.C., spoke at the Princeton conference — which he called “not my normal crowd.”

While he disagrees with the call for a total ban on targeted drone strikes, he sympathizes with many of the conference group’s concerns. The U.S. is using drone strikes too frequently in too many countries, with all the ill effects the interfaith leaders point out, Friedman said.

“If I had my druthers, the president would have to get Congress’ permission for drone strikes against particular countries or groups,” Friedman said. “The way we go to war is too casual.”

Opinion
The campaign is over. Will a Biden-Harris administration deliver on its interfaith promises?
News
A blue surprise? As Arizona trends toward Biden, Latino voters stand out
News
In Oregon, churches and anti-fascists unite to provide mutual aid to fire evacuees and others in need
Opinion
Building interfaith community at work
News
600 faith leaders sign letter urging California governor to stop transfer of incarcerated people to ICE