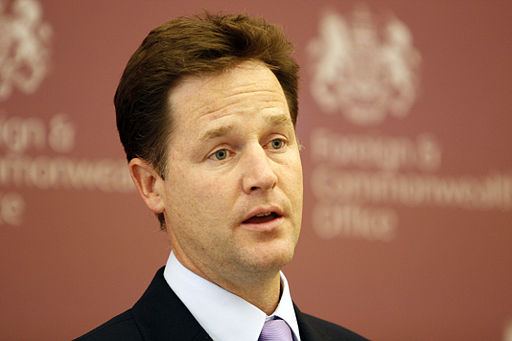 Deputy Prime Minister Nick Clegg speaking to UK based foreign diplomats at a briefing on the United Nations Summit on the Millennium Development Goals in London on September 9, 2010.
February 12, 2015
Trevor Grundy 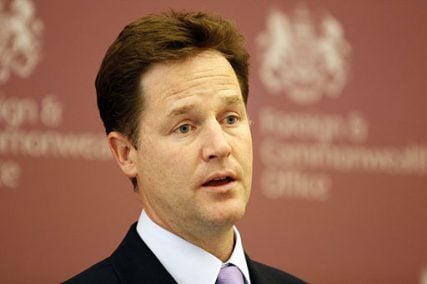 Deputy Prime Minister Nick Clegg speaking to U.K.-based foreign diplomats at a briefing on the United Nations Summit on the Millennium Development Goals in London on Sept. 9, 2010.

CANTERBURY, England (RNS) In marked contrast to the U.S., public figures who disavow belief in God tend to win approval from a growing number of British people.

A survey of 1,500 adults released Thursday (Feb. 12) by YouGov, a British market research firm, shows that as many as a third of all Britons do not believe in God or any kind of higher power.

The poll found that Nick Clegg, deputy prime minister, and Ed Miliband, leader of the opposition Labor Party, were viewed positively because they state openly that they don’t believe in God.

That’s a stark contrast to the U.S., where the number of openly atheist politicians in Congress hovers around zero.

The survey shows that while atheists in England are ready to stand up and talk about their nonbelief in God, most Christians are reluctant to proclaim their faith.

And it shows a marked divide between young people -- who increasingly embrace atheism -- and older people, who identify with their religious upbringing.

Young people also admire comedian and actor Stephen Fry for saying in public that if there is a God then that God is “a capricious, mean-minded, stupid God” who allows so much suffering. Photo courtesy Fry and British Humanist Association.

Almost one in three under the age of 24 declare themselves to be atheists, compared with only one in 10 people over the age of 60.

Thirty-three percent of those surveyed said they did not believe in “any sort of God or spiritual power.”

The proportion of people who denied belief in God rose to 46 percent among 18- to 24-year-olds.

Young people also admire comedian and actor Stephen Fry for saying in public that if there is a God, then that God is “a capricious, mean-minded, stupid God” who allows so much suffering.

David Voas, professor of population studies at Essex University, said that while Fry had offended many religious people, he delighted atheists.

Information about the survey's margin of error was not immediately available.

Related Posts
By Yonat Shimron
Survey: Most Americans aren’t comfortable going back to religious services
By Elana Schor, Hannah Fingerhut
Poll: US believers see message of change from God in virus
By Yonat Shimron
Poll: The ‘Trump bump’ is over, especially among white Christians
By Yonat Shimron
Survey: Half of American Jews have experienced or witnessed anti-Semitism
By Adelle M. Banks
For first time, survey finds majority of pastors says global warming is real, man-made