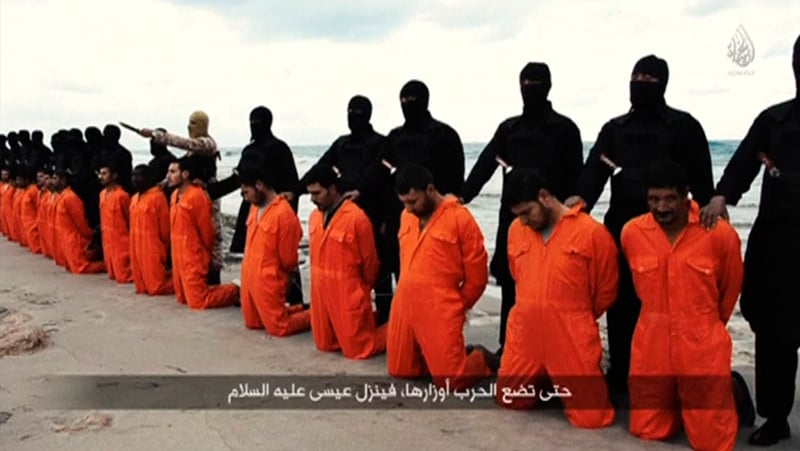 Men in orange jumpsuits purported to be Egyptian Christians held captive by the Islamic State (IS) kneel in front of armed men along a beach said to be near Tripoli, in this still image from an undated video made available on social media on February 15, 2015. Photo courtesy of REUTERS/Social media via Reuters TV *Editors: This photo is not available for republication.
February 16, 2015
Monique El-Faizy

Men in orange jumpsuits purported to be Egyptian Christians held captive by the Islamic State (IS) kneel in front of armed men along a beach said to be near Tripoli, in this still image from an undated video made available on social media on February 15, 2015. Photo courtesy of REUTERS/Social media via Reuters TV
*Editors: This photo is not available for republication.

CAIRO (RNS) The gruesome video released by militants from the Islamic State showing the beheading of 21 Egyptian Copts in Libya has focused the world’s attention on the plight of Christians there and the government's ability to respond.

But the sad truth is that Libyan Christians have long been ruthlessly targeted expressly for their faith, and the Coptic community in Egypt has been virtually powerless to help them.

The U.S. State Department estimates that 50,000 Coptic Christians live in Libya, most of whom are Egyptian. They cross the border into Libya in search of employment.

A report by the Washington-based Tahrir Institute for Middle East Policy states that religiously motivated kidnappings in Libya dates back to 2012.

With the growth of radical Islam, Christians in the region are increasingly feeling endangered. Coptic Christians make up about 10 percent of Egypt's population, and trace their roots to St. Mark, who founded an outpost of the fledgling Christian movement in 1st-century Alexandria.

The victims in the video were kidnapped in separate incidents in Libya, the first of which took place in December when militants grabbed some Christians from a car. Then, in January, the attackers reportedly broke into an apartment and separated a group of Christians from Muslims, taking only the Christians. One of the victims may not have been an Egyptian.

Within hours of the video’s release, the Egyptian government launched airstrikes on Islamic State targets in the fractured nation. Egyptian President Abdel Fattah el-Sisi promised to “deliver retribution against those criminals and murders who are devoid of the most simple of human values.”

He personally paid his respects to the Coptic patriarch, Pope Tawadros II, and declared seven days of mourning in the country.

Monday’s pre-dawn response was fierce and decisive, although critics say it was done more to appease Egyptians than to advance strategic goals. The families of the victims had been holding protests and meetings since the abductions in an effort to prod the Egyptian government to secure their release but had received little support or information, according to people in contact with the families. 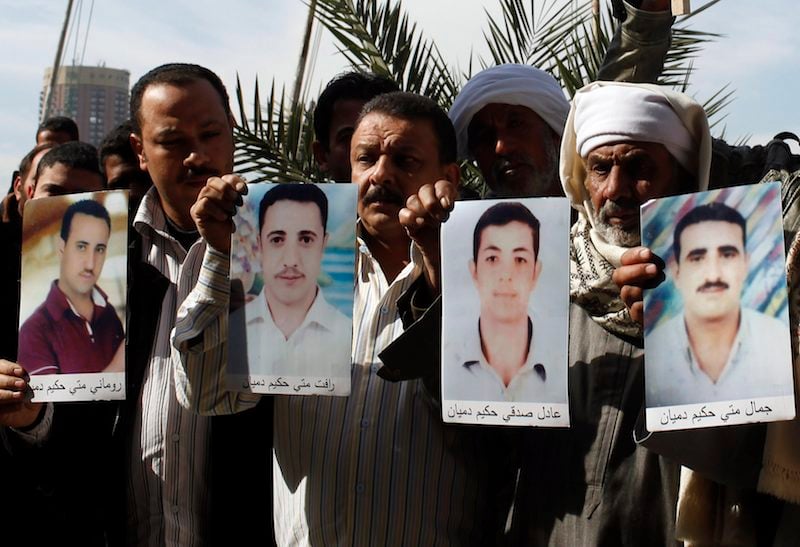 Families of the 27 Egyptian Coptic Christians workers kidnapped in the Libyan city of Sirte, hold pictures of their kidnapped relatives as they ask for their release, in front of the U.N. office in Cairo January 19, 2015. Photo by REUTERS/Asmaa Waguih
*Editors: This photo may only be republished with RNS-POPE-LIBYA, originally transmitted on February 16, 2015.

“I think if the Egyptian authorities had made an effort before (the killings) it would have been possible to get a better result,” said Mina Thabet, a Coptic activist and researcher at the Egyptian Commission for Rights and Freedoms.

Thabet said he knows of seven other Copts who were abducted in August and September and has had no information about who was holding them or even if they were still alive.

“These people need to be put into focus and we need to ensure their safety,” he said.

In December, a Coptic doctor, his wife and their teenage daughter were abducted and murdered.

The families of the kidnapping victims may not be satisfied with the government response, but the Coptic Church has expressed faith in Sisi’s efforts. In a statement, the church urged followers to be “assured that their great homeland will not rest until the evil perpetrators are justly punished for their evil crime.”

Thabet said the victims in Sunday’s video all come from impoverished areas of Upper Egypt where jobs are scarce. Egypt has issued a complete ban on travel to Libya and ordered the evacuation of those who are still living there.