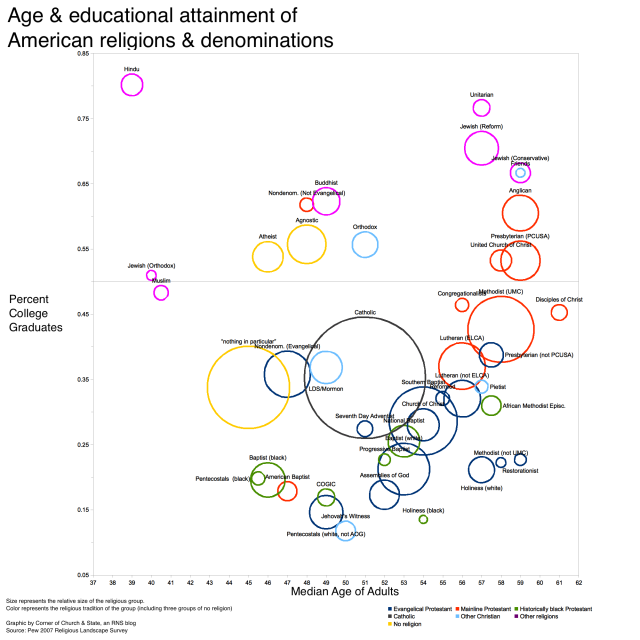 As H. Richard Niehbur reported nearly a century ago, American denominations were created along social divisions. While the greatest division is race, there are also divisions based on class. These class divisions are not as strong as they once were, but they persist nonetheless.

There are also other demographic differences uncovered by sociologists. One of these is age. Some denominations have graying memberships; others have proven to be better able to keep and attract younger members.

This graph charts the age and education of 44 different religious groups (including three "no religion" groups) . The data comes from Pew's 2007 Religious Landscape survey.

Observations from the graph

See a graph of the politics of American religious groups

How to read the graph

Update: This graphic is updated from the one published Feb. 17, 2015. The original chart placed Conservative and Orthodox Jews together. I did this original grouping because of the relatively small Orthodox sample, but in retrospect, I decided the number of Orthodox is not too small for this type of descriptive chart (they are not the least among the groups charted). The current graph separates these two groups. This makes it clear the demographic differences between Reform and Conservative vis-a-vis Orthodox. Updated on Feb. 20, 2015.

September 21, 2020
Related Posts
By Alejandra Molina
In Oregon, churches and anti-fascists unite to provide mutual aid to fire evacuees and others in need
By Priyadarshini Sen
A Catholic priest takes on interfaith fight against COVID-19 in a sacred Hindu city
By Jeffrey Salkin
The most Jewish thing that Ruth Bader Ginsburg ever did
By Yonat Shimron
Ruth Bader Ginsburg, who died Friday, was shaped by her minority faith
By Tara Isabella Burton
Yoga’s 'father in the West' still defining our spirituality and celebrity 100 years later