(RNS) Rodnell Collins stood next to his uncle, Malcolm X, as the latter stared thoughtfully at Plymouth Rock during a visit to Massachusetts when Collins was a child.

It wasn’t until years later that Collins, the son of Malcolm’s sister, Ella Little Collins, would learn what his uncle was thinking: “We didn’t land on Plymouth Rock. The rock was landed on us.”

Malcolm X, the African-American nationalist leader and onetime minister of the Nation of Islam who was assassinated 50 years ago Feb. 21, inspired countless people with the frank and uncompromising way he spoke about race relations in America. And much of what he said about the experiences of black Americans remains true today, experts say.

Yet, while other civil rights leaders of the 1950s and ’60s are more broadly celebrated as American heroes, the fire with which Malcolm X spoke still overpowers the words he was saying.

“With the exception of the hip-hop generation, with the exception of urban African Americans, his legacy has been tarnished as having done very little and having been part of a vision of America that is anti-American,” said Khalil Gibran Muhammad, executive director of the Schomburg Center for Research in Black Culture in New York, which holds writings and personal memorabilia of Malcolm X.

Born in 1925 as Malcolm Little, he became a Muslim and a member of the Nation of Islam while serving time in prison for burglary. He dropped his surname, saying it was a slave name.

Malcolm X drew thousands of followers to the Nation of Islam with his charisma and oratory that admirers say shined a light on disadvantages for blacks in terms of poverty, education, police brutality and residential segregation.

Detractors labeled him as “militant,” saying he preached violence and racism because of his early-career rhetoric declaring whites the enemy. At one point shortly before his death, Malcolm X wanted to bring charges against the United States at the United Nations, alleging human rights violations against black Americans.

But Malcolm X demanded liberty and freedoms not just for black Americans, but for all humans, Collins says. “His legacy is the testimony of what one can strive and do for the liberty of others,” he said.

Collins said his uncle was not urging blacks to act as aggressors. Rather, he was telling them they had a right to defend themselves against lynchings and other violence perpetrated by whites.

In a sense, Malcolm X was considered militant because he had a much more radical critique than other activists of the time, Muhammad said.

And that more radical position, Muhammad said, gave Martin Luther King Jr. and his political allies more of a middle ground from which to campaign for civil rights.

“He’s still the foil to Dr. King,” he said. “He still plays the bad guy and the one who did not have a vision of a universal brotherhood.” 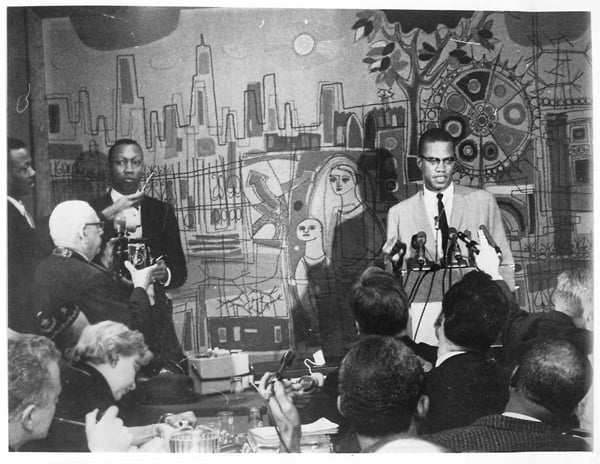 “More violence on the racial scene in 1964 than Americans have ever witnessed” was predicted in New York by Malcolm X, a militant nationalist who broke with the Black Muslim movement headed by Elijah Muhammad to form his own organization, Muslim Mosque, Inc. Religion News Service file photo

But Malcolm X and King moved closer together in terms of their visions as their lives progressed. Malcolm X shifted away from his separatist views after a pilgrimage to Mecca in 1964. He embraced a more universal vision of brotherhood, similar to one King espoused, Muhammad said. King, meanwhile, focused more broadly on human rights issues Malcolm X had pushed.

Had both men lived past 39, experts say Malcolm X and King likely would have had a meeting of the minds and would have provided greater focus on advances for blacks beyond basic civil rights.

“I think black Americans would have had a more unified answer to King’s last question of ‘Where do we go from here?’ ” said Clayborne Carson, founding director of the Martin Luther King Jr. Research and Education Institute at Stanford University.

Collins said Americans shouldn’t just think of Malcolm X as a firebrand but should be inspired by him to understand and be vigilant about liberties for all.

Purple Catholicism
Is Judge Barrett’s ‘kingdom of God’ different from Obama’s?
News
Rev. Gil Caldwell, United Methodist civil rights and gay rights activist, dead at 86
Home Top Three
Rev. Al Sharpton, families of police shooting victims join march on Washington
News
March on Washington events to focus on racial justice, police brutality, voting
Opinion
From King to Gandhi, racial justice brings faiths together
© Copyright 2020, Religion News Service. All rights reserved. Use of and/or registration on any portion of this site constitutes acceptance of our User Agreement and Privacy Policy, Privacy Statement and Cookie Notice. The material on this site may not be reproduced, distributed, transmitted, cached or otherwise used, except with the prior written permission of Religion News Service.