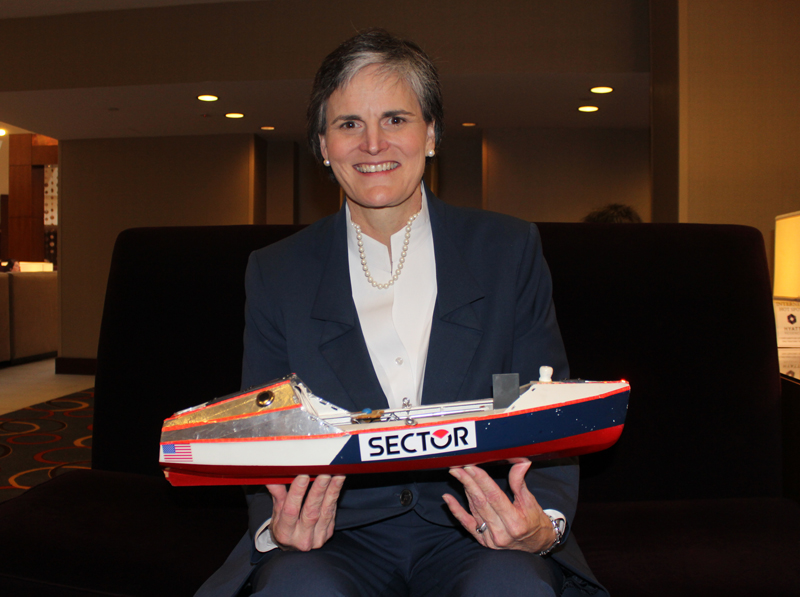 Tori Murden McClure, president of Spalding University in Louisville, Ky., poses with a replica of the rowboat she used in 1999 to become the first woman to row alone across the Atlantic Ocean. She had just spoken to fellow presidents of the National Association of Independent Colleges and Universities in Washington, D.C., on Feb. 4, 2015. Religion News Service photo by Adelle M. Banks

(RNS) Since she was installed as president of Spalding University, Tori Murden McClure has encouraged students and faculty to feed the hungry and repair houses for the needy, helping the Louisville, Ky., school clock in 1.6 million service hours in one year.

So when she learned of religion scholar Karen Armstrong’s Charter for Compassion, the Protestant president pushed to have her Catholic university designated the world’s first “compassionate university.”

“It gave us something to brag about,” said McClure of the school founded in 1920 by the Sisters of Charity of Nazareth. “Not being Catholic, I’m allowed to brag.”

A decade and a half ago, McClure made a name for herself by becoming the first woman to cross the Atlantic alone by rowboat. For the last five years, she has been working on making compassion, rather than competition, her trademark — encouraging students and staff to find their better selves and help others. 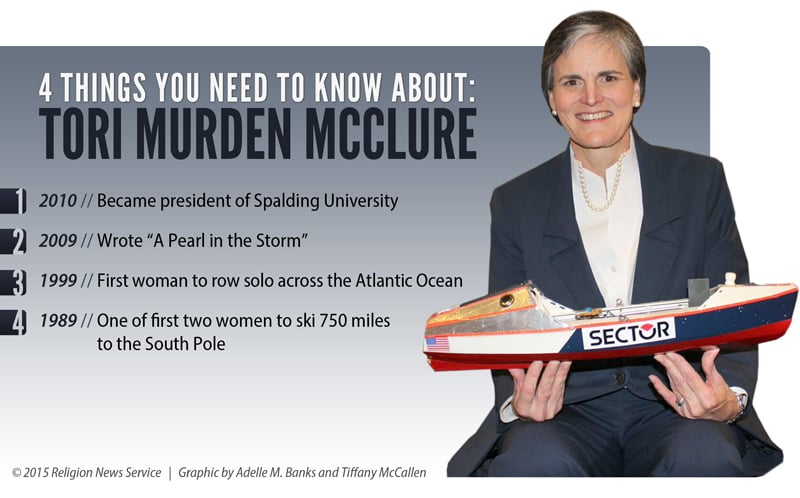 “‘Do unto others as you would have them do unto you’ — this is not so easy when you think of the ‘other’ as your opponent on the court, the ball field, or in my case the river,” she wrote. “I am a rather competitive person, ‘loving my enemies’ (another test of compassion) is something I must work on every day.”

The 51-year-old educator admits that her adventures on sea and land — she also was one of the first two women to ski 750 miles to the South Pole — were ways to battle feelings of helplessness. She grew up with an intellectually disabled brother and as a divinity school student felt inadequate in her visits with AIDS patients. Her work with homeless women at a shelter she ran in Louisville prompted her to pursue law school.

“If I can build a rowboat and row it alone across the ocean, I will not feel helpless anymore,” she recalled in early February at the prayer breakfast of the National Association of Independent Colleges and Universities in Washington, D.C.

On her first attempt to cross the ocean, she traveled more than 3,000 miles before being rescued after a hurricane capsized her 23-foot vessel. After working for boxing great Muhammad Ali — who convinced her she didn’t want to be known as the woman who almost made it across the Atlantic — she tried again. She wrote in her autobiography, “A Pearl in the Storm,” that near the end of the successful trip “I needed to make peace with my helplessness.”

She proposed to her husband, Mac McClure, by phone from the boat after surviving another hurricane and a week before she reached land.

McClure, who was raised Presbyterian but considers herself more spiritual than religious, has turned her sights to education.

“If you want to close the gap between the promise of humanity and the performance of human beings, you become an educator,” she said in her speech to college presidents.

McClure was attracted to the compassionate charter developed by Armstrong and supported by the Dalai Lama and Archbishop Desmond Tutu because it calls for respect for every human being and dedication to the relieving of human suffering.

“I really see that the greatest part of education is to recognize that in many important ways you are me and I am you,” she said.

Her emphasis on finding common ground has led to “restorative circles” on her campus where students and faculty face those who have wronged them.

In one case, a young man who submitted fraudulent time sheets was caught, made restitution and is expected to graduate soon after participating in one of those circles.

“Behind Door No. 1 is jail; behind Door No. 2 is the restorative approach,” McClure reasoned. “We do the spiritual side. We do the human development side. What leaves the world better? Door No. 2. Let’s go through Door No. 2.” 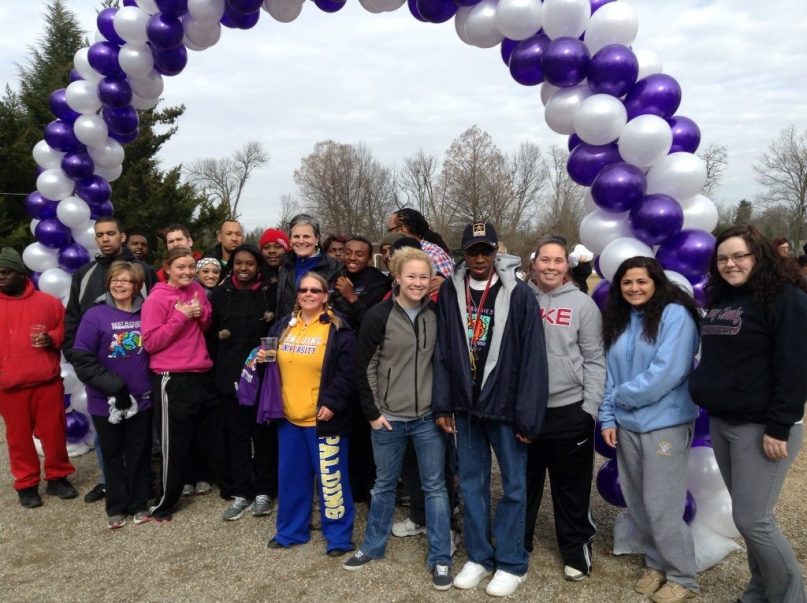 “She always wanted us to not shy away from the difficult, hard conversations that lead us to justice,” said Hudson. “She wants to get at the essence of the conflict as opposed to just put a Band-Aid on it.”

Senior TaNaa’ Davis said McClure encourages community service from the first time she addresses students after they arrive on campus.

“She was letting all of us know in her speech that basically being of service to others — it’s not something you do; it’s a lifestyle,” Davis, a social work major, recalled of McClure’s talk with freshmen. “You live to serve.”

Those words stuck with Davis, who leads a praise dance ministry that collects socks and toilet paper for the homeless and has traveled with the Sisters of Charity of Nazareth to rebuild homes in New Orleans that were damaged by Hurricane Katrina.

Davis, whose brother has autism, also started a campus chapter of the Best Buddies program, which supports people with intellectual and developmental disabilities, and she took part in a fundraising “friendship walk” with McClure.

“I sent her an invitation and she came and she walked with our chapter,” said Davis, 23, who is from Louisville.

Although her school has been independent of the Sisters of Charity of Nazareth since 1973, McClure continues some of the traditions the order started at the school’s founding. She and other Spalding staff annually visit the order’s Bardstown, Ky., motherhouse, and students learn of its legacy of community service that includes sisters who served as nurses for units on both sides of the Civil War.

Louisville Archbishop Joseph Kurtz said that McClure is a “good fit” as the leader of the Catholic university just blocks from his archdiocesan headquarters and that the decision to make a Protestant its leader — a rarity among the member schools of the Association of Catholic Colleges and Universities — was uncontroversial.

“To me what is essential, of course, is that a person understands, accepts and promotes the mission and I have found that consistently she has done so,” said Kurtz, the president of the U.S. Conference of Catholic Bishops. He appreciates that despite her “sports hero” background she has chosen to work “for a very unselfish and community-serving outcome.”

In fact, after spending previous decades skiing, rowing and writing about her athletic exploits, McClure seems satisfied with the “pretty big adventure” of leading Spalding.

“There are great theological debates as to whether one can prove faith by works or faith by faith,” she said. “I lean pretty heavily toward works.”