When Pope Francis makes his U.S. debut tour this fall, what will he face on the social issues that rile so many Americans?

What does his Catholic flock in Philadelphia, New York City and Washington D.C. — all on his itinerary — think about abortion, same-sex marriage and immigration?

Now, you can just map it.

The new edition of The American Values Atlas allows users to “heat map” views on these highly partisan issues in all 50 states and 30 metropolitan areas. Users can click issue by issue and group by group to see where attitudes blow hot or cold.

The Public Religion Research Institute launched the Atlas last year with political and religious affiliation and demographic data. Now, it has an interactive tool that reveals “Americans are all over the map,” on abortion or same-sex marriage, said Robert Jones, CEO of PRRI.

But there’s “a surprising degree of consensus on immigration,” he said

Because the sample size is so large — drawn from 50,000 interviews by landline and cellphone — users can search both by large religious traditions (and those with no religious brand) and by subgroups.

To give a sense of the partisanship on issues, Jones looked at the degrees of difference.

There’s a 43 percentage point spread between the states where the majority “favor allowing gay and lesbian couples to be able to marry legally” and states where the fewest percent of people agree.

In Alabama and Mississippi only 32 percent support it while New Hampshire shows 75 percent support. In Massachusetts — the first state to legalize gay marriage — support is nearly the same at 73 percent.

On whether abortion should be legal in all or most cases, the gap stretches 36 percentage points wide. Support is highest in New England — New Hampshire at 73 percent and lowest in Wyoming at 37 percent.

But on immigration reform, “all the states are in majority territory,” said Jones.

The point spread is just roughly 14 percent between Delaware at 66 percent and Wyoming where it gets the cold shoulder, relatively speaking,  at 52 percent.

The Atlas also maps a second question on abortion: Whether “at least some health care professionals in your community should provide legal abortions.” 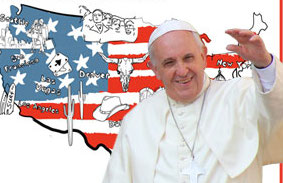 But there are noteworthy numbers of people in sync with the popes’ message to welcome the stranger.

He has made the plight of immigrants a high priority in his messages. And that will likely be applauded in these cities.

Least warm hearted — Philadelphia, City of Brotherly Love. But even there, only 35 percent said illegal immigrants are “a burden on our country because they take our jobs, housing and health care. ”

And politicians headed for the Iowa caucuses and the 2016 presidential race, take heed. In Iowa, 57 percent say immigrants strengthen our nation.

Opinion
The real question is: Who benefits from Texas’ new abortion law?
Follow us on Facebook!
Submit your photos to RNS