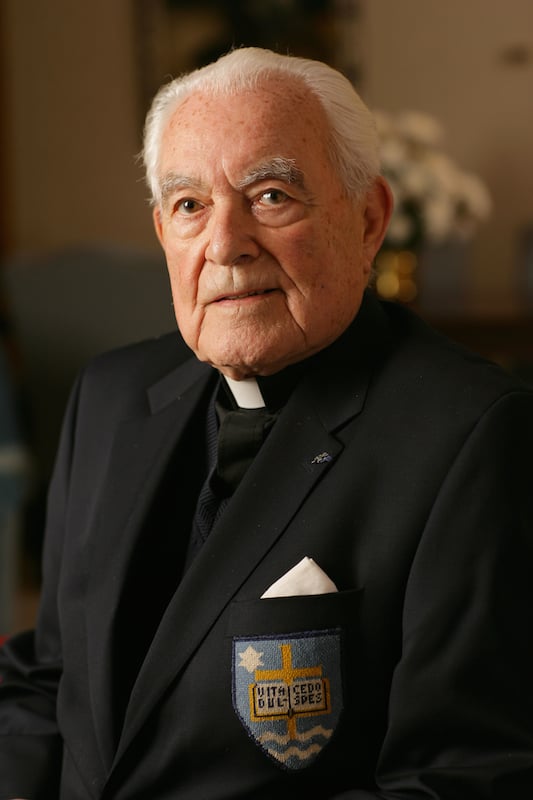 WASHINGTON (RNS) Late Thursday night (Feb. 26), America lost one of its great heroes, the Rev. Theodore Hesburgh, the longtime president of the University of Notre Dame. He was 97.

My first real encounter with Hesburgh was during my first few months at the White House. President Obama had accepted an invitation to deliver the commencement address at Notre Dame in May 2009, and a politically conservative Catholic campaign was launched to attack the president and pressure Notre Dame into rescinding its invite -- and his honorary degree -- because of the president’s support of abortion rights.

Hesburgh believed providing space for different viewpoints was a testament to one’s confidence in his or her beliefs. This affected both his views about the nature of Catholic higher education, and his response to the controversy surrounding the president’s appearance at Notre Dame:

"We're not a place that hides out in the corner and says we believe this and that's that and we're not going to talk to anybody that doesn't agree with us. We know we disagree on things, let's get together and talk,” he said at the time.

"We have invited a number of presidents here. None of them have agreed on all issues, but I think just coming here and seeing another point of view and mingling with people who look upon abortion as an abhorrent thing -- that will have an effect on them.”

We have grown accustomed in recent years to religion becoming defined through a political lens; neither is it much of a surprise to have a politician's personal faith questioned for political gain. What is rare, but needed more than ever, are religious people who view politics as one forum among others to live out their faith.

Hesburgh was such a man, and we need more people like him. For more than 50 years, both when it was unpopular and when it brought him acclaim, Hesburgh held to his faith, and acted on behalf of human dignity.

In 1957, when many religious people were using their faith to justify Jim Crow laws, Hesburgh was named a founding member of the U.S. Commission on Civil Rights. He could be found marching with the Rev. Martin Luther King Jr., singing “We Will Overcome.”

His faith also inspired him to global leadership on nuclear nonproliferation. His work was central to the advances made in nuclear disarmament in the post-Cold War era, and his vision inspired the founding of the Kroc Institute for International Peace Studies at Notre Dame, which will provide leadership in this area for decades to come. 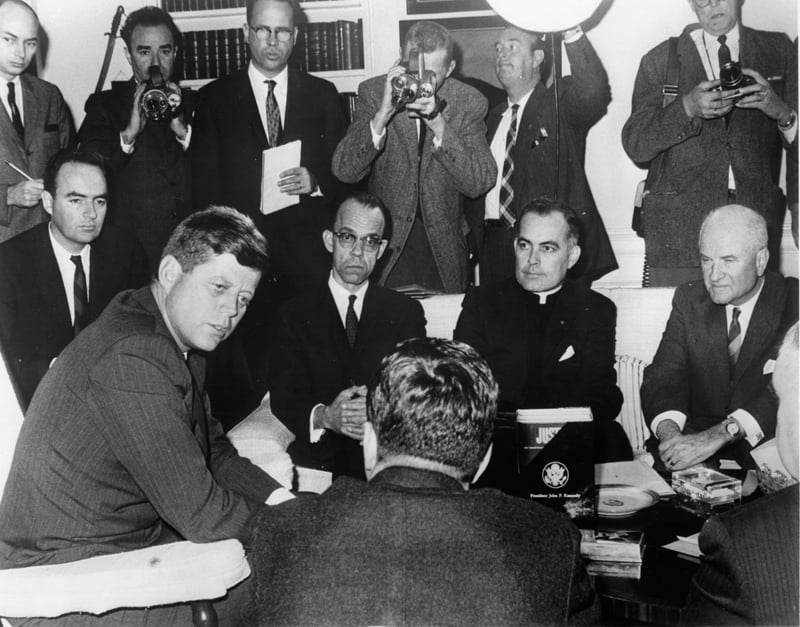 (RNS) President John F. Kennedy meets with the Civil Rights Commission at the White House, including the Rev. Theodore Hesburgh, (seated, second from right), president of the University of Notre Dame, in 1961. RNS file photo.

Hesburgh’s list of honors is impressive. He became president of Notre Dame in 1952 at the young age of 35, and held the position for the next 35 years. He was awarded the Presidential Medal of Freedom by President Lyndon Baines Johnson, and he also became the first representative from higher education to be awarded the Congressional Gold Medal in 2000.

Though his legacy extends far beyond his beloved campus in South Bend, Ind., the institution he built there stands as a testimony to the embrace of the public square and private faith that he modeled in his own life.

"Father Hesburgh has long spoken of this institution as both a lighthouse and a crossroads," Obama told the graduates of Notre Dame in 2009. "A lighthouse that stands apart, shining with the wisdom of the Catholic tradition, while the crossroads is where 'differences of culture and religion and conviction can co-exist with friendship, civility, hospitality, and especially love.'"

Hospitality, grace and civility are Christian virtues for a reason. They reflect a higher set of convictions than those based on a political calculus.

Denis McDonough, the White House chief of staff and a committed Catholic, highlighted Hesburgh's legacy in one of the most personal speeches he’s delivered during his White House tenure. Addressing the importance of protecting religious freedom abroad, McDonough noted that the president’s "earliest inspirations were faith leaders of the civil rights movement, including Dr. King, and Catholic leaders like Father Ted Hesburgh.”

Hesburgh will no doubt be honored as an effective advocate, a storied leader of a historic institution, and a hero of the civil rights movement. Yet perhaps most important, he will be remembered as someone whose actions and witness sprung from his faith, evidenced by his willingness to take courageous and sometimes unpopular public stands.

May he rest in peace. And may his life, and his priorities, be an example to those of us still pursuing faithfulness here on earth.

(Michael Wear served in the Obama White House and led faith outreach for the president’s 2012 re-election campaign. He is now a strategist and consultant at the intersection of faith, politics and American life. You can find him on Twitter @MichaelRWear.)