The Occasional Pilgrim is an online feature from the staff of Religion News Service, highlighting pilgrimage destinations from around the world.

In the heart of the Balkan city of Prizren, on the banks of the Bistrica River, stands the majestic Sinan Pasha Mosque, a relic of the newly-minted country of Kosovo‘s Ottoman past. Built in 1615 by Sofi Sinan Pasha, the bey of Budim, today it is the oldest and grandest of the city’s 26 mosques. Nestled in the old quarter of the city on Shadervan square, its open doors offer pilgrims and passersby a respite from the bustle and heat of the town with its elaborately painted frescoes, hidden prayer cubbies and soft carpeting. Photos by Kimberly Winston. 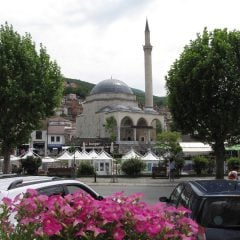 Sinan Pasha Mosque towers over Prizren’s center square, a pool of calm in the midst of traffic, crowded cafes and a busy market. 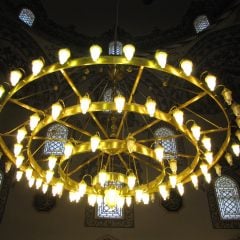 Pilgrims entering the mosque walk under this chandelier, meant not only to provide light but remind the faithful of the heaven above them. 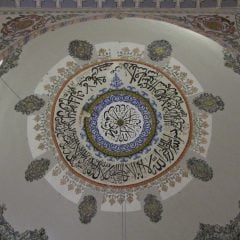 The mosque’s dome soars above the heads of pilgrims and is elaborately detailed with “arabeskas” – geometric and floral patterns – and calligraphy of Quranic verses. 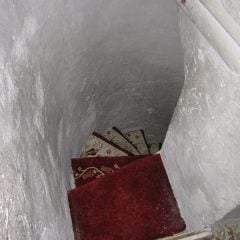 Women pilgrims must mount this staircase, which seems carved out of the five-foot thick walls, to reach a women’s section where they can pray without being observed by men. Women pilgrims bow before this carved screen overlooking the mosque floor as they bow east towards Mecca. 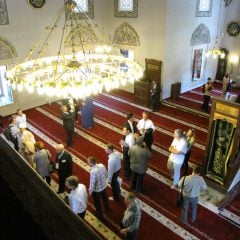 The white lines in the carpet help pilgrims and worshippers form straight lines as they kneel in the direction of Mecca. 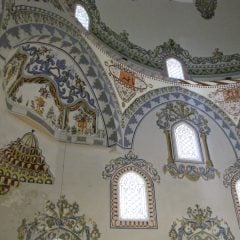 The Sinan Pasha Mosque’s frescoes are decorated with flowers, vines, arches and even images of other mosques – very rare in mosque decoration – to remind pilgrims of the paradise that awaits them. 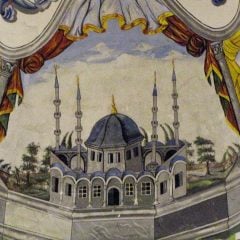 As they pray, pilgrims face this depiction of Istanbul’s Blue Mosque, rendered here because it was – and is – one of the most beautiful mosques in the world. Religion News Service photo by Kimberly Winston The walls of the mosque are punctuated by small prayer cubbies where the faithful can sit and study the Quran or pray, slowing down while the city speeds past outside. 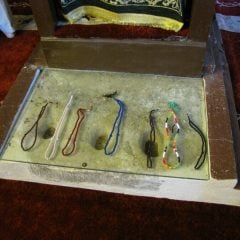 A tray of Islamic prayer beads – or subha – is available for pilgrims to worry between their fingers as they chant the 99 names of Allah. 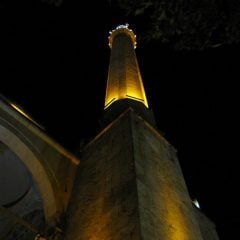 The mosque’s minaret, from which the muezzin makes the call to prayer five times a day. 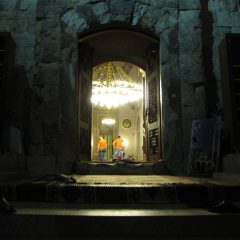 Pilgrims heed the muezzin’s call – his last for the day – to pray once more before bed.

News
What four strangers of different faiths learned while living together during a pandemic
News
How House chaplain calmed tense hours in besieged Capitol with prayers for ‘God’s covering’
News
Jericho March plans DC return in the new year to pray Pence will overturn election
News
Each year 1,000 Pakistani girls forcibly converted to Islam
Islam Beyond Phobia
What Jesus means to me as a Muslim