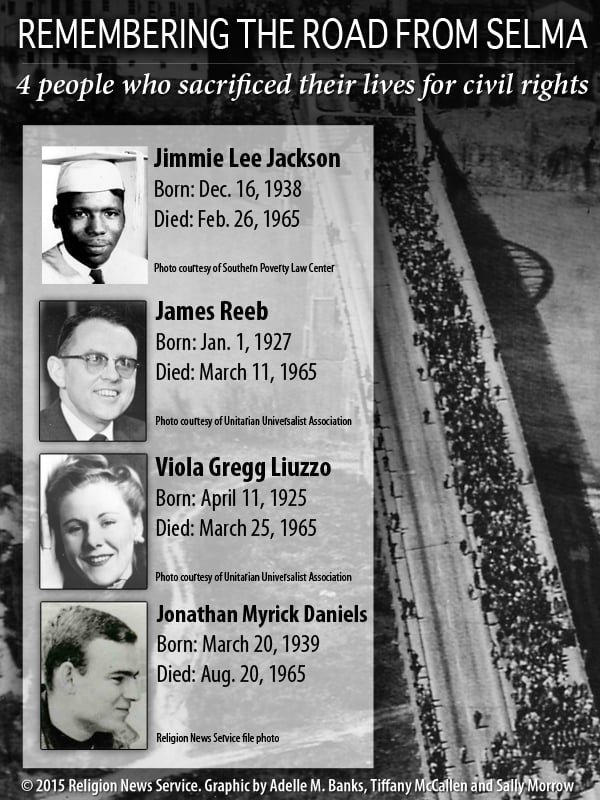 (RNS) They were just four of the thousands of Americans who came to Selma 50 years ago, heeding the call of the Rev. Martin Luther King Jr. for people of conscience to join in protesting the plight of African-Americans in Alabama at the height of the civil rights movement.

The four marytrs — a Baptist deacon, a minister, a Unitarian laywoman and an Episcopal seminarian — are largely unknown, but they’re being remembered for sacrificing their lives for the rights of others.

The names of all four are etched in the Civil Rights Memorial in Montgomery, Ala., along with 36 others — starting with Mississippi minister George Lee, who died in 1955, and ending with King, who was assassinated in 1968.

“The gravity of his call for justice in the South became punctuated even more graphically by these deaths,” said Montgomery historian Richard Bailey. Jimmie Lee Jackson was a 26-year-old deacon of his Baptist church in Marion, Ala., and had been involved in local protests. Photo courtesy of Southern Poverty Law Center

“His death is what really precipitated the march from Selma to Montgomery,” Bailey said. Jackson was a 26-year-old deacon of his Baptist church in Marion, Ala., and had been active in local protests.

“He actually attempted to register to vote about five times before his death,” said Brandon Owens, staff research associate at the National Center for the Study of Civil Rights and African-American Culture at Alabama State University.

Jackson was fleeing police who attacked protesters after a peaceful demonstration. He was shot inside a Marion cafe at the hands of an Alabama state trooper while trying to protect his grandfather and mother on Feb. 18, 1965, and died eight days later.

Angered by his death — a pivotal scene in the recent film “Selma” — some protesters wanted to lay Jackson’s body at the foot of the Alabama Capitol.

“They did not do that in actuality,” said Janice Franklin, project director of the civil rights center. “But that was the original message that they wanted to send, not only to Alabama and the Capitol, but also to send a signal around the world that blacks were being killed here in Alabama trying to vote.”

In his eulogy for Jackson, King called many — including his fellow clergy — to account: “He was murdered by the indifference of every white minister of the gospel who has remained silent behind the safe security of his stained-glass windows.”

In 2010, former trooper James Bonard Fowler pleaded guilty to a misdemeanor manslaughter charge in Jackson’s slaying and was sentenced to six months in prison. 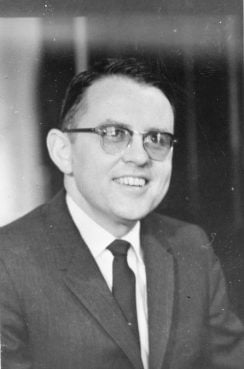 “Four men came at us from across the street,” recalled the Rev. Clark Olsen, now 81 and living in Asheville, N.C. “One of them was carrying a club and swung it at Jim’s head.”

Reeb, Olsen and another white Unitarian Universalist minister had just met and decided to eat dinner together on March 9, 1965, after the second, aborted “Turnaround Tuesday” march. All three had headed to Selma to answer King’s call for ministers to join him there. They were about to return from supper to the church where there was a meeting with King when the white men shouted at them: “Hey, you niggers!”

Reeb, a 38-year-old father of four, was taken to a Birmingham hospital and died two days later.

His trip to Selma wasn’t the first time he worked to improve the lives of African-Americans. He had taken a job with a Quaker organization in Boston to work on housing issues.

“He felt it was appropriate to live among the people he was working with,” Olsen said. “He was just a very committed person this way and wanted to do good in the world and right some of the wrongs in our society.”

King preached Reeb’s eulogy, and hours later, President Lyndon B. Johnson mentioned Reeb’s death and the violence of Selma when he addressed Congress to introduce the Voting Rights Act: “Many were brutally assaulted; one good man, a man of God, was killed.”

Three white men were charged in Reeb’s death. All were acquitted. 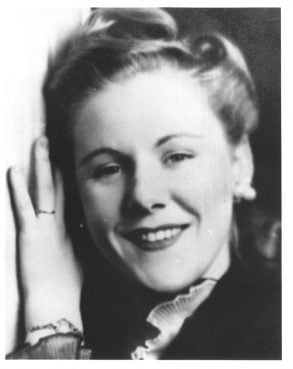 Viola Liuzzo, 39, a mother of five, drove her 1963 Oldsmobile to Selma and had planned to stay for a week. Photo courtesy of Unitarian Universalist Association

“Her affiliation with Unitarians did influence her decision to drive south,” said her daughter, Sally, of her mother’s trek from Detroit. “However, even if she was not involved in any church, she would have went anyways; that is who she was. She loved her country and knew segregation was not right; she wanted a better world for her children.”

Liuzzo, 39, a mother of five, drove her 1963 Oldsmobile to Selma and had planned to stay for a week. “She came here because she was civil rights-minded,” said Bailey. “She wanted to help.”

She died on March 25, 1965, shortly after the conclusion of the last of the three marches from Selma. She was killed by shots fired from a car of Ku Klux Klansmen — who spotted a white woman and a black man in a car together — as she drove another civil rights worker from Selma to Montgomery.

Her decision to come to Alabama, after hearing King’s call for ministers and others, was a continuation of her earlier work on social justice.

“Before becoming active in civil rights, she was an advocate for education and economic justice reform and was arrested twice — in both cases requesting a trial to publicize her cause,” according to UU World magazine, a publication of the Unitarian Universalist Association.

One of the four white men in the car was an FBI informant. The other three were sentenced to 10 years in prison for conspiracy but were not found guilty of murder.

They had just been released from jail, where they were held with other civil rights workers who were protesting the exploitation of black sharecroppers by white plantation owners in Fort Deposit, Ala. Daniels, 26, and Sales were in a group of people who stopped at a store to buy a soda. A white special deputy sheriff aimed a gun at Sales, and Daniels took the shot.

Daniels, the valedictorian of his class at the Virginia Military Institute, had left his Episcopal seminary in Cambridge, Mass., and headed to Selma, like others, answering King’s call after the first “Bloody Sunday” march. But unlike many who left, he stayed and worked on voter registration in Lowndes County and also pushed for the integration of a white Episcopal congregation in Selma.

“He was not there because he had no other options in life,” said Sales, founder of the SpiritHouse Project, a social justice nonprofit in Atlanta. “He was there because he chose to be there.”

Montgomery historian Alston Fitts, who was a Harvard grad school classmate of Daniels, said the white seminarian worked hard to not respond to hate in kind. He defended white Southerners to his Northern friends as “imperfect Christians.”

King said of Daniels, according to a VMI website: “One of the most heroic Christian deeds of which I have heard in my entire ministry was performed by Jonathan Daniels.”

The white man charged in his death was acquitted. In 1991, Daniels was recognized as a saint of the Episcopal Church and is remembered each Aug. 14. His Cambridge alma mater and Episcopalians from Atlanta and Alabama plan to mark the 50th anniversary of his death with a pilgrimage to the site of his slaying in August.