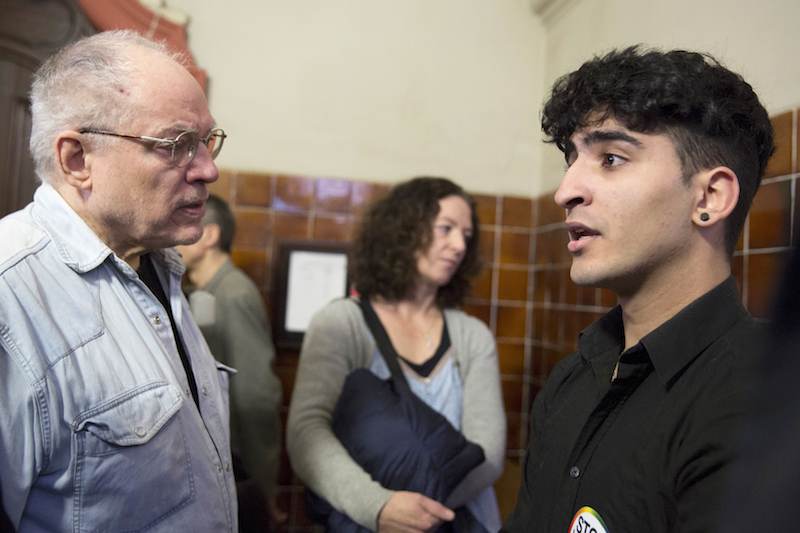 Young gay Lebanese immigrant Nasser El-Ahmad, right, accuses his father and uncle of kidnapping and torturing him in an attempt to persuade him to agree to an arranged marriage. Photo courtesy REUTERS/Axel Schmidt

BERLIN (Reuters) A German court fined the father and two uncles of an 18-year-old Muslim citizen for depriving him of his personal freedom when he was a minor in an attempt, the victim says, to force him into marriage with a woman despite his homosexuality.

In a case highlighting the problems Germany faces in integrating its four-million-strong Muslim community, Nasser El-Ahmad, who has a Lebanese background, has also told German media that his family tortured him for being gay.

Found in a car at the Romanian-Bulgarian border two days after he went missing in December 2012, prompting an Interpol alert, El-Ahmad says he was kidnapped by his family in order to arrange his marriage to a Lebanese girl.

After a five-minute hearing on Thursday, the judge handed the three accused men, who were not present, fines of 1,350 euros ($1,436) each for detaining him and taking him abroad.

El-Ahmad, wearing a black shirt and trousers, black earrings and a “STOP HOMOPHOBIA” badge, said the court had done what it deemed right. “I did what I have the strength to do. At least this came to court, I’m happy about that,” he said, adding he had not expected his relatives to turn up. “I’m not someone who hides. I don’t want to suppress my sexuality.”

El-Ahmad has told German media his father vowed to slit his throat and his uncle threatened to burn him after dousing him with petrol because they could not allow him to be gay.

The court did not deal with allegations of torture or forced marriage but the abduction happened after he was put into care.

While Germany has long struggled to stop the practice of forced marriage, the case has exposed risks faced by gay men. Some estimates put the number of forced marriages in Berlin at about 450 a year, with only a few dozen affecting men.

“It was a very brave step as a homosexual .. to question a religious society that is very conservative and lives in the Middle Ages,” said film director and gay rights activist Rosa von Praunheim. “Gays and young women are in the same boat.”

The case also feeds into a debate about the role of Islam in Germany, brought to a head by the anti-immigration PEGIDA (Patriotic Europeans Against the Islamisation of the West) group which won support with warnings about being overrun by Muslims.

Although its popularity is waning, the grassroots movement put the question of Islam’s role in Germany on the political agenda and its weekly marches in Dresden were at their height when Chancellor Angela Merkel condemned them and declared: “Islam belongs to Germany.”