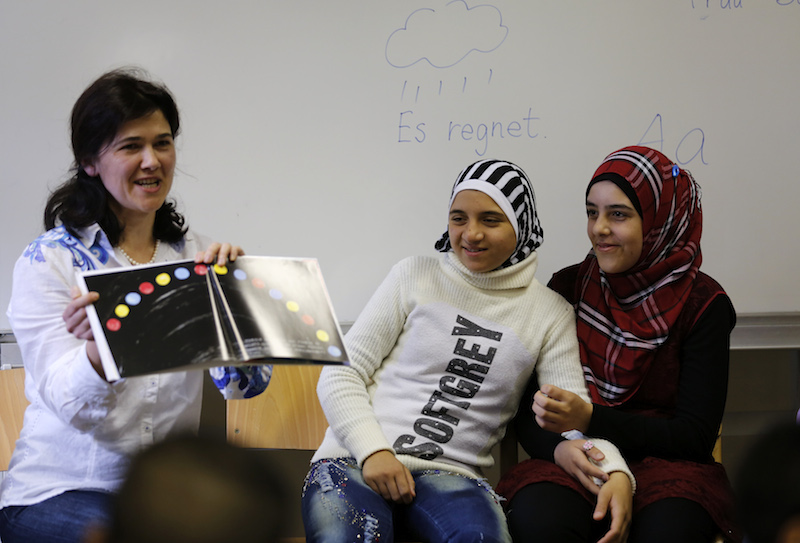 Syrian refugees learn the German language in a school at the ‘Friedland’ refugee camp in the central German village of Friedland Photo courtesy REUTERS/Ina Fassbender.

BERLIN (Reuters) Muslim women teachers can wear headscarves as long as it does not cause disruption in school, Germany’s top court said in a ruling that overturns an earlier ban and may fuel debate about what some nationalist groups see as creeping “Islamization.”

The Constitutional Court struck down its own 2003 ban on headscarves for teachers, which had led some German states to forbid Muslim headscarves in schools while permitting the use of Christian symbols such as crucifixes and nuns’ habits.

The court in Karlsruhe, ruling on a case brought by a Muslim woman blocked from a teaching job because of her headscarf, said religious symbols could only be banned when they posed “not just an abstract but a concrete risk of disruption in schools.”

“This is a good day for religious freedom,” said Volker Beck, a lawmaker from the opposition Greens.

He argued that headgear worn by devout Muslim, Jewish and Christian women and men was less of a threat to German society than “opponents of diversity” such as the right-wing Alternative for Germany (AfD), neo-Nazis and extremist Muslim Salafists.

Christine Lueders, head of the federal anti-discrimination agency, hailed the ruling for “reinforcing religious freedom in Germany.” With education administered by Germany’s 16 states, she called on local authorities to review the relevant rules.

But the German Teachers’ Association (DL) called the ruling “problematic,” saying it undermined the principle of political and religious “neutrality” in schools and public services.

“We fear this ruling could lead to disruption in certain schools if, for example, non-Muslim parents do not agree with their children being taught by teachers in headscarves,” said Josef Kraus, president of the teachers’ body.

Berlin daily TAZ warned that the anti-Islam protest group PEGIDA, which began last year with marches in Dresden and soon spawned imitation rallies across Germany and beyond, would seize on the ruling to argue that Europe is being taken over by Islam.

“PEGIDA will celebrate,” said TAZ on its front-page, beneath a photo of colored headscarves in a shop-window in Berlin.

Enthusiasm for PEGIDA, which stands for ‘Patriotic Europeans Against the Islamization of the West’, fizzled after its members began to be outnumbered by anti-racist demonstrators and PEGIDA founder Lutz Bachmann posed for a photo with a Hitler mustache.

Chancellor Angela Merkel has accused the PEGIDA organizers of spreading hatred against immigrants, whom she says Germany, with its shrinking workforce and aging population, badly needs.