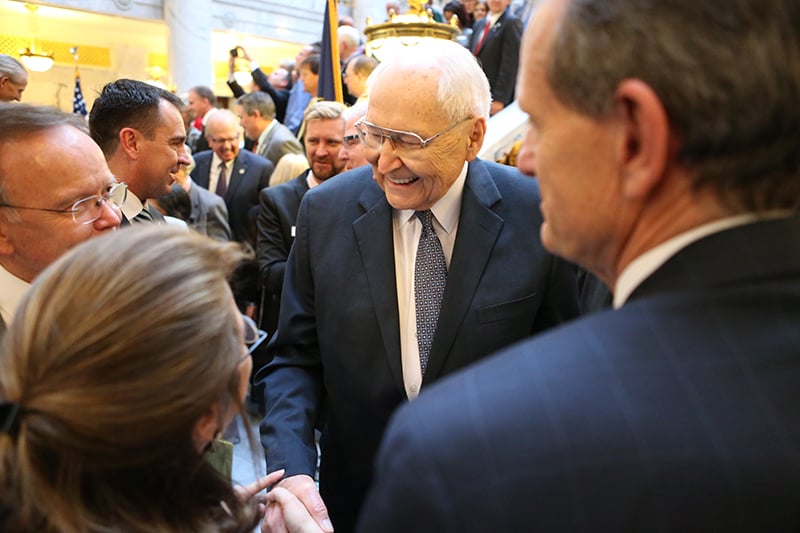 Elder L. Tom Perry of the Quorum of the Twelve Apostles greets legislators and fellow supporters of Utah Bill 296 which balances religious freedoms and LGBT rights. Photo courtesy of the Church of Jesus Christ of Latter-Day Saints

SALT LAKE CITY (RNS) An LDS apostle reaffirmed recently that Mormons who support gay marriage are not in danger of losing their temple privileges or church memberships — even though the Utah-based faith opposes the practice.

In an interview Friday (March 13) with KUTV in Salt Lake City, Elder D. Todd Christofferson said that individuals in the 15 million-member Church of Jesus Christ of Latter-day Saints would be in trouble only for “supporting organizations that promote opposition or positions in opposition to the church’s.”

Backing marriage equality on social media sites, including on Facebook or Twitter, “is not an organized effort to attack our effort, or our functioning as a church.,” Christofferson said in the interview.

The KUTV interviewer asked further if a Latter-day Saint could “hold those beliefs even though they are different from what you teach at the pulpit?”

“Our approach in all of this, as (Mormon founder) Joseph Smith said, is persuasion. You can’t use the priesthood and the authority of the church to dictate. You can’t compel, you can’t coerce. It has to be persuasion, gentleness and love unfeigned, as the words in the scripture.”

Christofferson echoed this sentiment in two January interviews with The Salt Lake Tribune.

“There hasn’t been any litmus test or standard imposed that you couldn’t support that if you want to support it, if that’s your belief and you think it’s right,” Christofferson said after a Jan. 27 news conference.

Christofferson made the point again in a Trib Talk interview Jan. 29.

“We have individual members in the church with a variety of different opinions, beliefs and positions on these issues and other issues,” Christofferson said. ” … In our view, it doesn’t really become a problem unless someone is out attacking the church and its leaders — if that’s a deliberate and persistent effort and trying to get others to follow them, trying to draw others away, trying to pull people, if you will, out of the church or away from its teachings and doctrines.”

In the KUTV interview, Christofferson further acknowledged that LDS leaders have evolved in their thinking about homosexuality, while maintaining that marriage should be between a man and a woman.

“This is not a doctrinal evolution or change, as far as the church is concerned,” the apostle said. “It’s how things are approached.”

All elements of society, “including ourselves, have gained greater understanding, especially in recent years,” Christofferson said.

Could there be a time when the LDS Church would change its position on gay marriage?

The apostle was unequivocal.