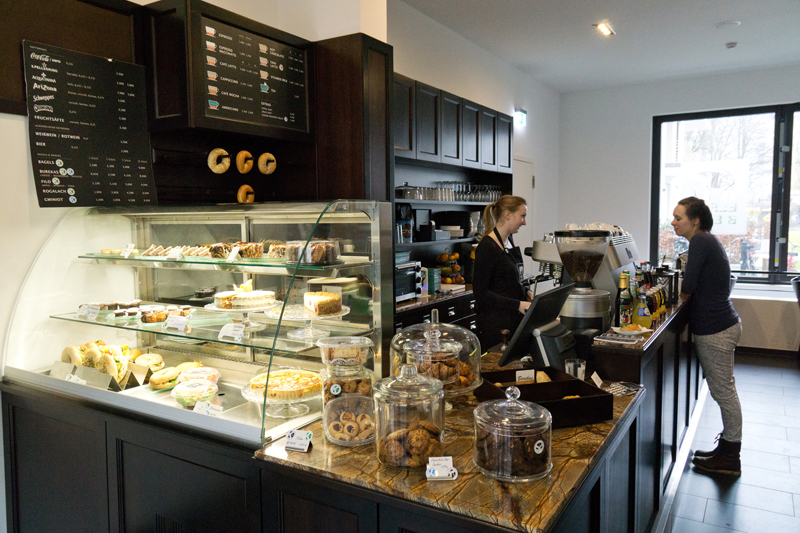 Cafe Elfenbein (“Cafe Ivory”) in Berlin, which opened last year, is certified to be Kosher and serves foods like bagels and rugelach. Photo by Harald Franzen, courtesy of USA Today

The aroma of freshly brewed coffee and homemade rugelach pastry fills the shop, where a rabbi has certified that all its food is kosher.

The hip addition to the city points to a trend obscured by rising anti-Semitism and terror attacks in France and Denmark that have alienated Jews. In central and Eastern Europe, Jewish life is thriving.

One major reason is that a young and more confident generation is shaping a new Jewish identity.

“Jewish life is flourishing in Berlin and the rest of the country,” said Jutta Wagemann, spokeswoman for the Central Council of Jews in Germany.

The Jewish community in Germany remains small, about 200,000 out of 80 million people. It has grown significantly from its postwar population of 37,000 in 1950 because of immigration from the former Soviet Union. The community is putting its stamp these days on the country’s cultural landscape.

In the East German city of Cottbus, an area known for right-wing extremists, a disused church was recently turned into a synagogue, providing space for the 460 members of the Jewish-Russian community.

In 2013, the School of Jewish Theology at the University of Potsdam opened to great fanfare, making the city near Berlin the nucleus of Jewish studies in Germany.

In February, more than 1,000 Jewish young people ages 11 to 19 met at the Jewrovision song-and-dance contest in Cologne in a knockoff of the decades-old Eurovision song contest held across the continent. It’s a talent show and youth gathering to celebrate the Sabbath, learn about Jewish tradition and discover their own Jewish identity.

“There has been a big generational change,” said Oren Osterer, organizer of the European Maccabi Games, the biggest Jewish sports event, which will take place in Germany for the first time this summer. “Many in the Jewish community in Europe didn’t want the games to take place in Germany. They thought that Germany wasn’t ready yet.”

The younger generation wanted this to change, he said. Until 2011, the German Maccabi delegation at the opening ceremony didn’t wear the country’s national colors — red, yellow and black. They instead wore Israel’s blue and white.

It seems surprising that Germany, responsible for the Holocaust that killed 6 million Jews during World War II, will host such a flowering of Jewish life. Synagogues and Jewish schools have security. Jewish locations have been vandalized, and swastikas appear with unnerving regularity. Jews have been attacked on the streets of Berlin.

Even so, there has been no recent mass exodus to Israel because of those events, community members say.

In Eastern Europe, where anti-Semitism is deeply rooted, the Jewish communities are remaking themselves, according to members of those groups.

In Poland, home to 25,000 Jews, a museum called the History of Polish Jews opened in Warsaw in October. Jewish dance and folk music have become trendy. A few Jewish 20-somethings created the fashion brand Risk OY with Yiddish-inspired clothing in 2012. T-Shirts feature such slogans as “Oy oy, my boy is goy” or “ISREAL.”

“Young Jewish people in Poland are coming back to their roots,” she said. “We have started to search for our family history, but at the same time, we don’t only want to look back. The future is important to us. We want to be responsible for our identity, and at the same time not be too serious about it.”

Jewish identity is changing in Europe, largely because young people are educated in a different environment than the previous generation, said Diego Ornique, Europe director of the American Jewish Joint Distribution Committee, a humanitarian group based in New York.

“The younger generation is embracing their culture and identity through informal initiatives and grass-roots movements,” he said.

In Hungary, which has a community of 150,000 Jews, about 1,500 children and teenagers from 25 different countries meet at the Szarvas International Jewish Youth Camp. For 12 weeks each summer, young Jews discover their cultural and religious heritage and learn about Jewish traditions.

The camp was established 25 years ago to “rebuild the Jewish identity in central and Eastern Europe and to plant the idea of the positive Jewish experience through informal Jewish education,” Szarvas director Sasha Friedman said.

He said the Jewish community in Hungary is going through a “renaissance” despite the difficult political situation for minorities, especially non-Christians and Roma. He noted that more than 12,000 people celebrated last year’s Judafest street festival in Budapest, almost a 40 percent increase over the prior year. That has happened with other Jewish celebrations.

“Ten to 15 years ago, there was only one big Purim holiday event in Budapest. Now you can visit around 10,” Friedman said, referring to a springtime Jewish holiday. “I’m proud to be part of this growing community.”

News
Yom Kippur Zoom reunites Holocaust survivors 71 years later
Opinion
The most Jewish thing that Ruth Bader Ginsburg ever did
News
Ruth Bader Ginsburg, who died Friday, was shaped by her minority faith
Martini Judaism
COVID has led us all into sin
News
600 faith leaders sign letter urging California governor to stop transfer of incarcerated people to ICE
© Copyright 2020, Religion News Service. All rights reserved. Use of and/or registration on any portion of this site constitutes acceptance of our User Agreement and Privacy Policy, Privacy Statement and Cookie Notice. The material on this site may not be reproduced, distributed, transmitted, cached or otherwise used, except with the prior written permission of Religion News Service.