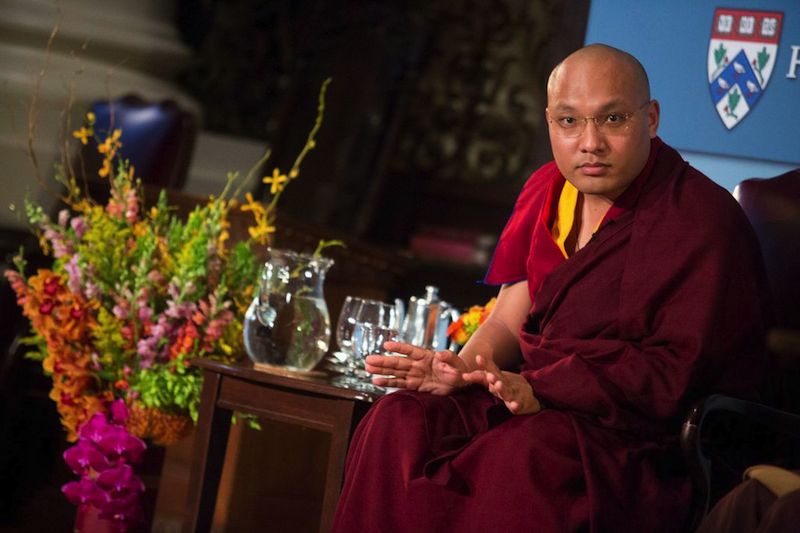 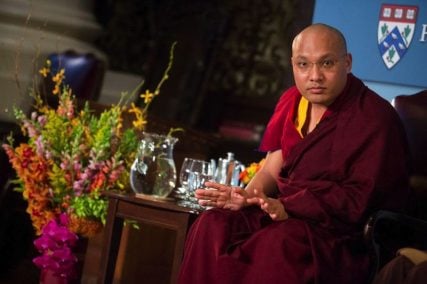 CAMBRIDGE, Mass. (RNS) Wrapped in the maroon and gold robes of a Tibetan monk, Ogyen Trinley Dorje isn’t what most people picture when they think of innovation.

To his followers, Dorje is the 17th Karmapa -- the leader of the Karma Kagyu school of Tibetan Buddhism and the latest in a line of reincarnated Tibetan teachers, or lamas, stretching back to the 12th century. He’s been training for that role since the age of 7, when other important lamas recognized him as the reincarnation of the 16th Karmapa, who died in Illinois in 1981.

But Dorje is blazing new paths for his tradition, and for the broader Buddhist world. In a public lecture and a series of meetings at Harvard Divinity School Thursday and Friday (March 26 and 27), he spoke out on issues ranging from LGBT rights and improving the status of women within Buddhism to race relations and the importance of protecting the environment.

Like many religions, Tibetan Buddhism has often pushed to the side broader societal issues in favor of personal piety. Not only is the Karmapa talking about them publicly, but he is also taking action. He started an initiative to turn monasteries into centers for environmental sustainability, and he recently announced an effort to establish full monastic ordination of women for the first time within the Tibetan tradition.

“His Holiness is an inspiring embodiment of a new generation of Buddhist teachers who care deeply about pressing contemporary issues and how religious voices can contribute to global conversations,” said Willa Miller, an instructor in Harvard’s Buddhist Ministry Initiative who is also a teacher within the Karmapa’s lineage. 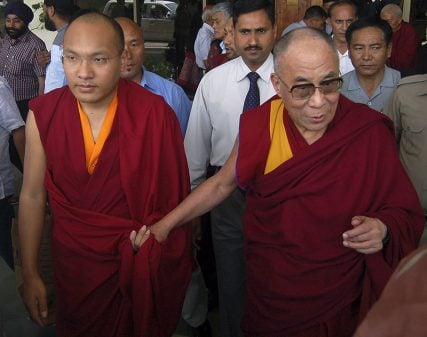 Karmapa Lama, left, and Tibet's exiled Buddhist spiritual leader the Dalai Lama arrive at the Kangra airport on the outskirts of the northern Indian hilltown of Dharamsala on May 16, 2011. Photo courtesy of REUTERS/Stringer
*Editors: This photo can only be republished with RNS-KARMAPA-HARVARD, originally transmitted on March 26, 2015.

The Dalai Lama has been a teacher and mentor to Dorje ever since the young Karmapa made a dramatic escape from Tibet at the age of 14 to settle in India. There is a rival claimant to his title, but Dorje has the support of the Dalai Lama and the majority of Tibetans, many of whom believe he will take over the Dalai Lama’s leadership role when the 79-year-old Nobel laureate dies.

The Karmapa’s main event in the Boston area was a public talk, titled “Caring for Life on Earth in the Twenty-first Century,” that filled Harvard University’s Memorial Church to capacity. In it, the Karmapa exhorted his audience to care for all life and spoke about the importance of cultivating compassion and concern for the environment.

“The food we eat, the clothes we wear, the air we breathe have all arisen interdependently,” he said, speaking through a translator. “We cannot survive alone. We cannot eat, wear clothes or breathe alone. The more keenly we are aware of this, the more we will begin to take responsibility for the welfare of other beings.”

The lecture drew together a broad swath of Boston residents, from Harvard faculty and administrators to college students to local Buddhist practitioners and members of the Boston area’s large Tibetan community.

According to Tenzin Wangchuk, 41, who runs his own construction business in Boston, visits by Tibetan leaders like the Karmapa and the Dalai Lama raise the Tibetan community’s profile and build awareness for its cause.

“With the Karmapa, obviously, it is awareness,” said Wangchuk. “People start reading about him, knowing about him, and then they want to know who he is and what's the history. It's all linked. It does kind of make a difference.”

That kind of community involvement is part of why the divinity school felt it was important to host the Karmapa in a venue like Memorial Church, where members of the public would have a chance to hear him speak.

In addition to his public talk, the Karmapa held a series of meetings with students in Harvard Divinity School’s Buddhist studies and Buddhist ministry programs. According to students who attended, those talks touched on issues like race, feminism and sexuality that many Tibetan teachers have traditionally shied away from.

Rod Owens came to the divinity school to study ministry after completing a traditional three-year meditation retreat in the Karmapa’s lineage. As one of the few African-American teachers in the Tibetan Buddhist tradition, he has been working with other teachers to address issues of race and racism within Buddhist communities.

“What he's saying, essentially, is that we have to take our practice off of the (meditation) cushion into the world and become conscious of how we're living together and impacting our environment -- the physical environment and the environment of communities, relationships and so forth,” said Owens. “I think it's part of his effort to make Buddhism relevant.”

September 21, 2020
Related Posts
By Claire Giangravé
Pope Francis makes a heartfelt appeal for the environment: 'Creation is groaning!'
By Brooke Schedneck
Buddhist monks have reversed roles in Thailand – now they are the ones donating goods to others
By Joshua Eaton
Buddhist teacher Lama Surya Das admits sleeping with adult students in past, says it was wrong
By Kalpana Jain
My spiritual path through the COVID-19 darkness
By Ira Rifkin
As Dalai Lama turns 85, his lineage’s future is as uncertain as Tibet’s