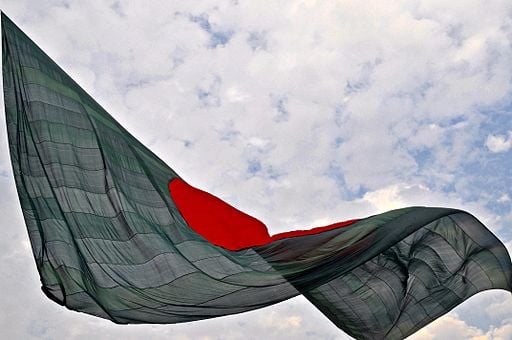 The Bangladesh national flag waves in front of a cloudy sky.

(RNS) Atheists, humanists and other nonbelievers are speaking out against the brutal slaying of an atheist blogger in Bangladesh, the second such killing in a month.

Washiqur Rahman, 27, was attacked and killed Monday morning (March 30) in the capital city of Dhaka by three men wielding knives or other sharp weapons. Police say they have two suspects in custody, both students at religious schools.

The attack comes a month after the machete slaying of Avijit Roy, a Bangladeshi-American blogger, in the same city. Roy, who was 42, was the founder of the Mukto-Mona, or “Free-Mind,” blog that promoted secularism in the Muslim-majority country.

Rahman had expressed support for Roy and his work on social media, attracting the attention of extremists.

“Violent Islamic extremists think they will scare their critics into silence and submission,” said Paul Fidalgo, communications director of the Center for Inquiry, a U.S.-based secular advocacy organization that has worked with Bangladeshi bloggers on issues of free speech.

But, he added in a statement, “their barbarity will only serve to strengthen the unity and resolve of those who believe in the fundamental right to free expression, which includes the right to criticize, question, and reject religion.”

The American Humanist Association, an advocacy organization for nonbelievers, also condemned the attacks.

“The vicious nature of these two murders underscores the oppression and harassment faced by humanists around the world,” its communications director, Maggie Ardiente, said in a statement.

Ali, an atheist, was working on a documentary critical of Islam with Theo van Gogh when he was killed by an extremist in 2004. Asif Mohiuddin, another Bangladeshi blogger who has been critical of religion in his country, will be a featured speaker there as well.

Both have received death threats for their work, said Danielle Muscato, an American Atheists spokeswoman.

Mohiuddin survived an attack in 2013 and knew Rahman.

“I liked him for his satire, his sense of humor,” Mohiuddin told the BBC. “He was a wonderful blogger and I’m very … upset right now.”

Rory Fenton, a British atheist and activist, recently visited Bangladesh and found atheist writers there willing to speak out after Roy’s death. But Rahman’s slaying, Fenton wrote in The Independent, may have a chilling effect. Unlike Roy, Rahman was not well-known, and it was his support of Roy’s work — not his own statements — that seems to have sparked the attack.

“The message sent by his murder was clear,” Fenton wrote. “‘This is beyond just insulting the Prophet. They don’t want anyone to question any authority, it doesn’t even have to be insulting; they will silence you.'”