People walk past Salt Lake temple as they arrive to attend the biannual general conference of the Church of Jesus Christ of Latter-day Saints in Salt Lake City, Utah on April 5, 2014. Photo courtesy of REUTERS/Jim Urquhart
*Note: This photo may only be republished with RNS-MORMON-GAYS, originally published on January 27, 2015 or RNS-TRANS-MORMONS, originally published on April 1, 2015.

SALT LAKE CITY – Sixteen-year-old Grayson Moore had no label, only metaphors, to describe the disconnect he felt between his body and soul.

It was like car sickness, he says, when your eyes and inner ears disagree about whether you are moving.

“It makes you sick,” Moore says. “That’s the same with gender.”

When Moore’s mother gave her then-daughter a vocabulary for the feelings — “gender dysphoria,” or transgender — an immediate sense of relief followed.

And, he says, God confirmed that he was not just a tomboy. He was in the wrong body.

Such moments come in the lives of transgender people — times when vague feelings of general discomfort with their identity crystallize into that realization.

Annabel Jensen was deciding whether to serve a Mormon mission. Sara Jade Woodhouse was married and had fathered a child.

In these three cases, their Mormonism — with its emphasis on the physical link between bodies and spirits and its insistence that gender is eternal — initially made it tougher to acknowledge what was happening with them.

Since switching genders (though none has had sex-reassignment surgery), all three say they have found psychological and theological peace, even divine approval, and a surprising welcome from local LDS leaders and congregations.

They are among a growing but little-understood minority in the Church of Jesus Christ of Latter-day Saints.

Transgender Mormons in Utah have formed a support group, march in gay pride parades — though most are not gay — and talk openly about their experiences. Efforts to bring awareness are crucial, they believe, because most members of the Utah-based faith know little or nothing about what it’s like to be transgender. And many judge and reject transgender loved ones. 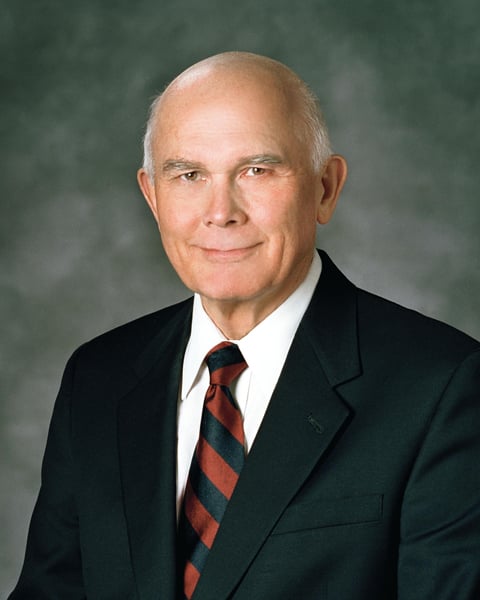 Dallin H. Oaks, a senior of member of the Mormon’s Quorum of the Twelve Apostles. Photo courtesy of The Church of Jesus Christ of Latter-day Saints

Even LDS apostle Dallin H. Oaks acknowledged recently that Mormon leaders “have not had so much experience with (transgender persons). … We have some unfinished business on that.”

Still, the faith does have policies. Elective sex-reassignment surgery “may be cause for formal church discipline,” according to the church’s Handbook. And an official LDS document, “The Family: A Proclamation to the World,” states that “gender is an essential characteristic of individual premortal, mortal, and eternal identity and purpose.”

“Because of this,” church spokesman Eric Hawkins writes in an emailed statement, “the church does not baptize those who are planning transsexual operations. If a person has already had such an operation and wishes to join the church, they may be baptized only after an interview with the mission president and approval by the First Presidency.

“The church does not ordain transgender people to the priesthood or issue temple recommends to them,” Hawkins adds. “Church leaders counsel already-baptized members against elective transsexual operations, and bishops may refer specific cases to the stake president for possible resolution at that level or by the First Presidency.

“We have faith that ultimately, the emotional pain that many of these people feel will be addressed by a loving God who understands each individual’s circumstances and heart.”

Hawkins declined to comment about the church standing and prohibitions for those who have had only hormone treatments.

Growing up, Moore, then known as Grace, had severe panic attacks beginning in late elementary school and continuing through junior high. By high school, says the 22-year-old math major at the University of Utah, his distress was so extreme he hardly could function.

Moore’s mother, Neca Allgood, took him to various doctors, but no one could diagnose his problems.

Trained as a molecular biologist and a scientist by instinct, Allgood had a suspicion that her daughter might have gender dysphoria.

When Allgood asked Moore if he was a girl in his body but a boy in his brain, the young man said, “Not just my brain — in my soul.”

With that recognition, Moore’s life, at last, made sense to him. “There’s a word for it,” he remembers thinking. “I’m not crazy.”

That night, Grace Moore knelt in prayer, asking God, “Am I your son?” He says he got a powerful spiritual affirmation that he was, indeed, a boy and that “it was going to be OK.”

“The answer to my prayers was to love him and help him live as a boy,” she says. “It increased my testimony and understanding of the Holy Spirit.”

Moore has not had surgery but doesn’t rule it out. He attends an LDS singles ward, where he has the full support of his Mormon bishop. He goes to the male-only priesthood meetings but hasn’t been ordained — and, under current church policy, won’t be.

He’s still listed as a female on LDS membership rolls.

“Gender dysphoria can be life-threatening,” she says. “The distress caused by the mismatch between body and spirit can lead to depression and even suicide.”

According to a poll conducted by the National Gay and Lesbian Task Force and National Center for Transgender Equality, 41 percent of transgender people have attempted suicide.

She begged God to take away her feelings. She became increasingly devout, embracing every assignment as she moved up the ranks of Mormonism’s all-male priesthood quorums.

“I did everything I could to invoke God’s help,” Jensen says, “but the feelings never went away.”

At 19, Jensen was ordained an elder — a precursor to serving a two-year mission — and began to confront the reality of her female gender.

“I’d be asked to use my priesthood, and it wouldn’t feel right,” she says. “It is not something that is mine to use.”

Jensen moved to Provo, started attending Utah Valley University and stopped going to church. Two years ago, she came out to her parents.

“They were shocked; they had no idea this was going on my whole life,” she says. “They didn’t know what to say.”

They said she couldn’t come home wearing a dress, nor would they use her new name or female pronouns.

“One of my brothers sent me a text calling me a monster,” Jensen says. “I miss my family, but I don’t want to visit. It’s become too painful.”

Until April 2013, Jensen thought that cross-dressing would fulfill her needs, but she found that was not enough. She took a UVU choir class and wore a dress to rehearsals, but when the time came for a performance, the conductor insisted she wear a suit.

“I cried during the whole concert,” she says. “At that point, I realized I couldn’t pretend to be a guy anymore.”

Jensen took hormones and within weeks started to feel female. “Everything about my body began to feel right,” she says.

The positive feelings prompted her to return to her religious roots.

One Sunday, in October 2013, Jensen announced her transgender identity to a Springville LDS singles ward bishop and asked if she could attend church.

“‘I don’t know anything about being a transgender Mormon,’” she recalls him saying, “‘but it’s my job to welcome you.’”

“Since nature may surprise us and not follow that formula — we know that some people are born with ambiguous genitalia or with both — it is absolutely possible for a perfect feminine soul to end up in a male body and vice versa.”

Woodhouse felt she was in the wrong body when children began to divide into boy and girl groups.

“I felt way more comfortable among the girls,” she says.

But this was Salem, Utah, and being different in a small town “was not a good thing,” Woodhouse says, “so I found a way to fit in.”

She fought her feelings through puberty, college, even fatherhood. Eventually, she felt she needed to transition to her real self or die.

After telling her then-wife, Woodhouse told her bishop. He was sympathetic but asked, “Why can’t you be the best woman in a man’s body you can be?”

She spoke with a therapist at LDS Family Services. The therapist told her: “You are not sick. I can’t cure you. This is who you are. You are going to have to figure out what to do about it.”

When Woodhouse told her then 5-year-old daughter that Daddy was going to become a woman, the child said, “That’s weird,” and then, “We can play with dolls when I come to visit you.”

Today, Woodhouse is not allowed to attend the women’s Relief Society in her Midvale ward but hopes one day to marry a man in the temple.

She remains on church records as a man. The only way to fix that, she says, is excommunication. Then, if church leaders agree, she could be rebaptized as the woman she sees as her true self.