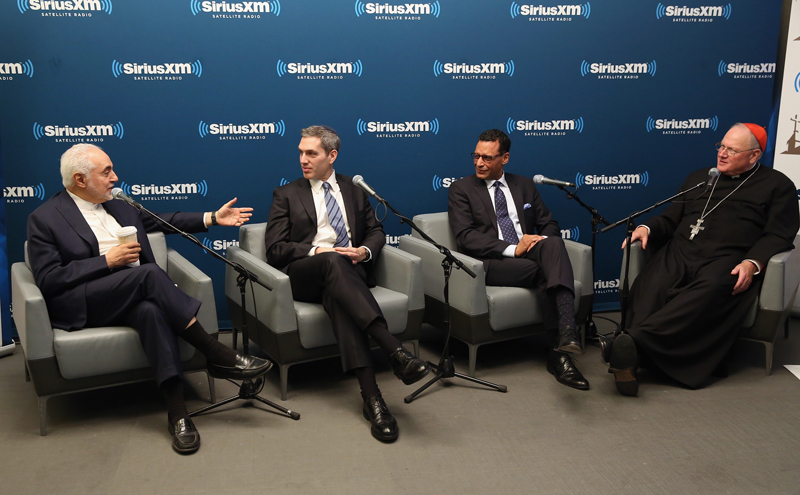 NEW YORK (RNS) Is religion the cause of so much of the violence racking today’s world? Or is faith just one of many factors? Or collateral damage?

But Cardinal Timothy Dolan wanted to switch things up on his weekly radio show, so he invited a minister, a rabbi and an imam to tackle that issue. What sounds like the opening line of a joke was actually an in-depth discussion of “the rise of religious intolerance.”

“I don’t know if there would be anything more pertinent today, or more timely today, than religious harmony, or the lack thereof,” Dolan, the Roman Catholic archbishop of New York, said Tuesday (March 31) in opening a special edition of his program on the Catholic Channel of the SiriusXM network.

“The elephant in the room is that today, whether we like it or not, religion is often the cause of scandal," he said. "Religion is supposed to be an overwhelmingly positive force that brings people together, that increases love and understanding, human progress and human enlightenment.”

But many people today -- believers and nonbelievers alike -- see religion as the opposite, he said, and “that keeps the four of us up at night.”

Throughout the hourlong discussion, the clerics offered a range of insights into why religion seems to be implicated in violence. Perhaps not surprisingly, they tended to absolve belief itself as the culprit.

Rather, they agreed that what passes for “religious” violence is in fact rooted in economic injustice; ethnic, national and cultural tensions; political and ideological rivalries; and -- especially in the Islamic world -- an underdeveloped concept of the separation of church and state.

“Religion is not the locomotive of conflict,” said Imam Feisal Abdul Rauf, founder of the Cordoba Initiative and the man whose efforts to build an Islamic center in Lower Manhattan five ago were thwarted after a bitter controversy over what foes labeled the “Ground Zero mosque.”

When it came to discussing possible solutions, the participants agreed that the very existence of such a panel pointed toward one answer -- that the American model has much to teach other cultures.

“What we need to do is to bottle the American experience of pluralism,” said Rauf.

But “how do you export that without it being heavy-handed?” asked Park Avenue Synagogue's Rabbi Elliot Cosgrove, a leader in Conservative Judaism.

“We Catholics are good at that -- bottling things, if you need our help on that,” the irrepressible Dolan interjected in one of several lighthearted moments.

The panelists also recognized that the U.S. experience poses its own challenges.

For example, they noted that many of the most fervent believers are also often the most recent arrivals to America. But in their desire to assimilate, will their children lose their religious identity in the American melting pot?

Cosgrove said that the better analogy, and goal, would be that of a symphony in which “each and every faith tradition is playing their own instrument,” maintaining their own identities and respecting one another.

Yet even if U.S. believers keep a strong religious identity, the panelists also worried about the temptation of many to put their faith in America itself -- to see “our country as an idol,” as Dolan said, “with its militarism, with its trust in economic progress, with its equation of divine blessing with economic wealth.”

“We understand that we have to have a relationship with the societies in which we live, and American society has allowed us to prosper in our religious belief and participate in ways that we can’t in many other nations,” responded the Rev. A.R. Bernard Sr., head of the Christian Cultural Center in Brooklyn and a past president of the Council of Churches of the City of New York.

But, Bernard continued, “there are times when our paths separate because there’s a disagreement between the direction the culture is going and remaining true to the orthodoxy of our faith.

“We live in this tension between the desire to assimilate and at the same time [to] retain our distinction within that culture.”