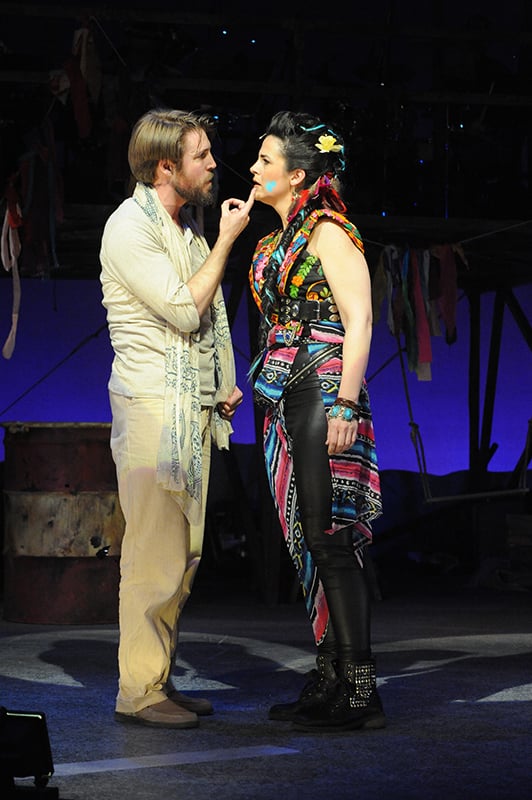 OLNEY, Md. (RNS) In a recent production of “Godspell” at the Olney Theatre Center just outside Washington, Judas drives a Ford Ranger, wears a long braid over the left shoulder, and kisses Jesus on the lips in the scene of betrayal.

For this gender-bending version of the Stephen Schwartz musical, directors chose an actress to portray the notorious betraying disciple.

Rachel Zampelli came to her audition prepared to sing “All for the Best,” a song traditionally performed as a two-man duet. Director Jason King Jones said she “knocked it out of the park.”

Zampelli, along with others who have acted or directed the unusual casting of Judas, said the focus was on the person — rather than the man — who befriended and then betrayed Jesus.

“This is not someone who started out evil or planned on being evil or wanted to hurt people from the get-go,” she said of her interpretation of the character. “This is something that happened, and he made a really big mistake and it was a necessary mistake for redemption.” 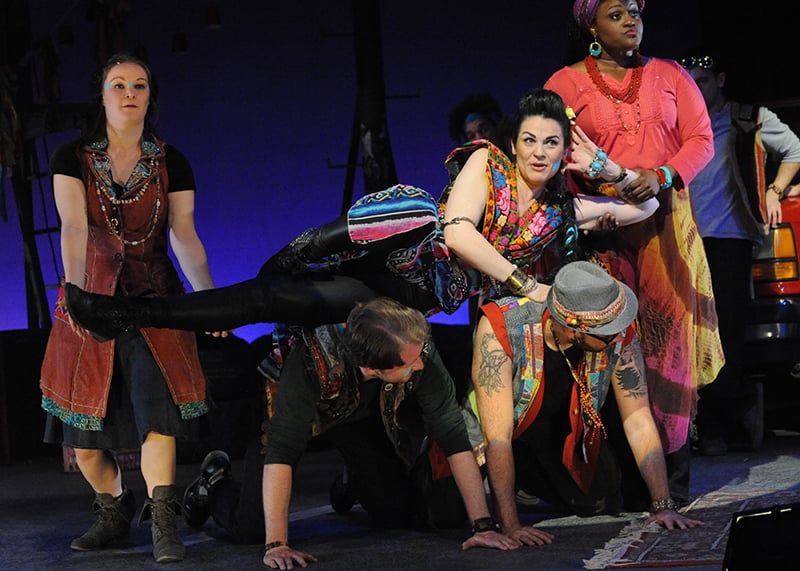 Experts are aware of few productions that have featured an actress in the role. Carol de Giere, author of “The Godspell Experience,” said audiences expect a male portrayal of Judas because the Bible describes the apostle as a man.

“Audiences come to ‘Godspell’ expecting to hear the wonderful Stephen Schwartz score and to suspend their disbelief, as they do with any stage musical,” she said. “If a director and performers create a great production, it’s likely that the audience will be uplifted by the show regardless of who plays who.”

Schwartz himself has offered a word of caution about making such a move in the play that has been a staple in theaters for more than 40 years.

“I think casting Judas as a woman poses problems, and I don’t recommend it,” he wrote in 2010 in an online response to performers’ questions.

He was particularly concerned about how a key moment in the production — and the Gospel of Matthew on which it is based — would be presented.

“I would also try to be very careful, in the playing of it, to make sure there is no hint of sexual tension between Jesus and Judas or of any physical desire — particularly during the kiss at the betrayal,” Schwartz said.

Zampelli said she wasn’t interested in creating such an impression: “I wanted it to be very clear that that’s not what was going on,” she said of the production, which ended March 15 after being extended twice.

Producers of “Jesus Christ Superstar,” a 1971 rock opera by Andrew Lloyd Webber and Tim Rice, also have grappled with how actresses might portray Judas. 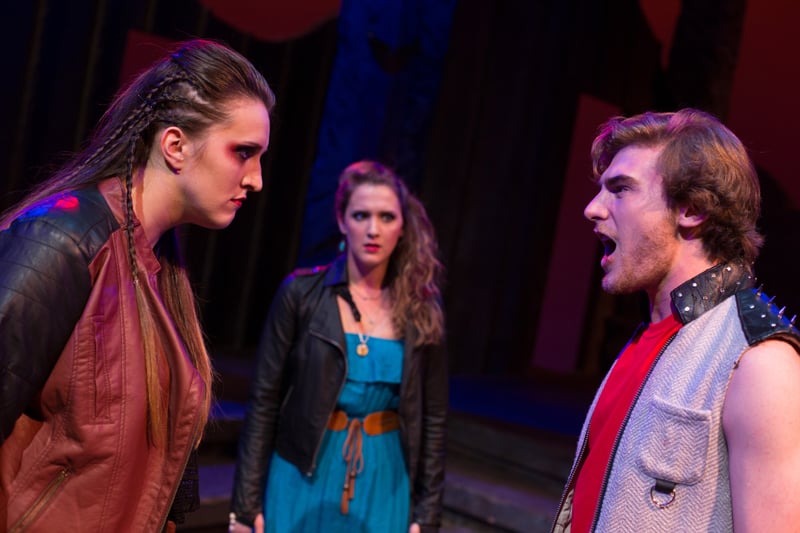 In the spring of 2014, Birmingham-Southern College featured a female musical theater major as Judas.

“What we tried to do with me as Judas was not put much emphasis on the gender at all,” said Gia Nappo, who now performs in Atlanta after graduating from the Alabama school. “From the very beginning, it was more important to tell Judas’ story as an individual.”

Like Zampelli, Nappo hopes that an actress portraying Judas can convey the jumble of emotions Judas felt as his initial vision to “change the world” with Jesus evolved into a scenario that led to crucifixion.

“There shouldn’t be this automatic bias, hatred of this person because of preconceived opinions and notions,” said Nappo. “It’s regret and it’s confusion and it’s love and it’s everything all at once.”

Michael Flowers, the Birmingham-Southern theater professor who directed Nappo (as well as an actress who played Judas in a 2001 production of “Godspell”), said Nappo’s portrayal injected an “interesting triangle” between Jesus, Judas and Mary Magdalene.

“There was a tension with two women really vying for Jesus’ attention,” he said of the characters, who each sing “I Don’t Know How to Love Him” during the production. 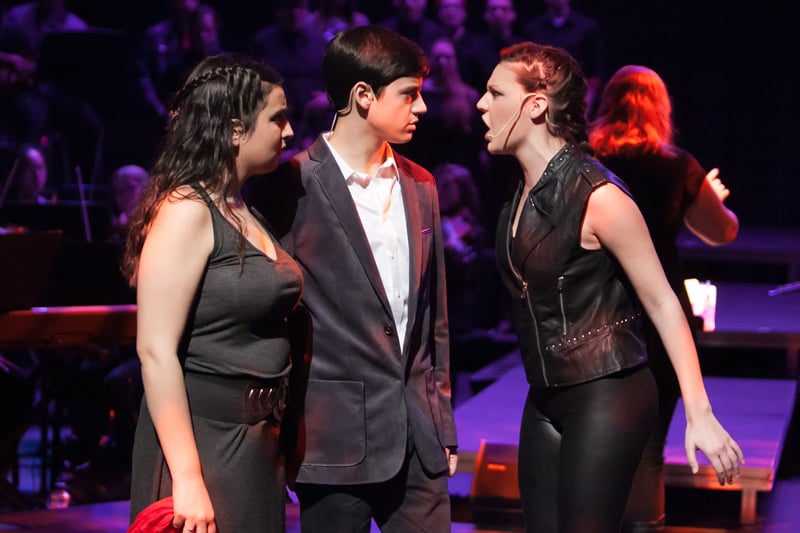 “Many years ago we realized that we didn’t have a male actor that could sing as high as Judas needed to sing,” said Pandzik, who chose an actress again for the role in March 2014 and had actresses play half of the disciples. “We realized that part is literally in the middle of a female range.”

While some directors aim for equity, a troupe in Yellow Springs, Ohio, will have a balance that’s the opposite of the Bible’s depiction of Jesus, Judas and the other disciples: The Yellow Springs Theater Company will premiere “Godspell” with an all-female cast on Easter weekend.

“What we’re saying here is gender doesn’t matter,” said artistic director Lorrie Sparrow-Knapp, who plays Jesus in the production. “Women can be men and Judas can be a woman and still have the qualities that bring forward the character of Judas.”

Productions with actresses tend to make Judas’ costume mildly androgynous — pants and shirt, but not wigs or dresses. According to one licenser, a play would not be approved otherwise.

“Even if a female actor was cast as Judas in ‘Godspell,’ the gender of the character would remain the same, and the female actor would have to play the role as male,” said Jason Cocovinis, director of marketing and promotions for Music Theatre International, which represents the rights for “Godspell.” “Under no circumstances would MTI permit the character to be portrayed as female.”

Some directors also have decided they’ll keep male actors in the Judas role. “I never considered it myself,” said Greg Parmeter, artistic director of La Crosse Community Theatre in Wisconsin, which is preparing to stage “Jesus Christ Superstar” in May and produced “Godspell” in 2009.

“Ultimately, when you do it, for whatever reason you do it, it changes the nature of the conversation about the show and your casting. Whether you’re trying to make a statement or not, you end up making a statement.”

But Nappo said she found she was able to convince those who were initially hesitant when they saw her enter the stage: “I did have a handful of people come up and say things to the effect of ‘When I heard that it was going to be a female I was like, “Oh great,” and you absolutely convinced me.’”

For Nappo, it was a sign of success that an audience member came away feeling empathy rather than only rejection about Judas — or about a woman playing him on stage.

“Man or woman,” she said, “if the actor playing Judas is doing their job and is staying true to how this story was written, the audience should feel that.”

News
Orthodox Easter a ‘mixed kind of joy’ at Ukrainian church in Bucharest
Follow us on Facebook!
Submit your photos to RNS