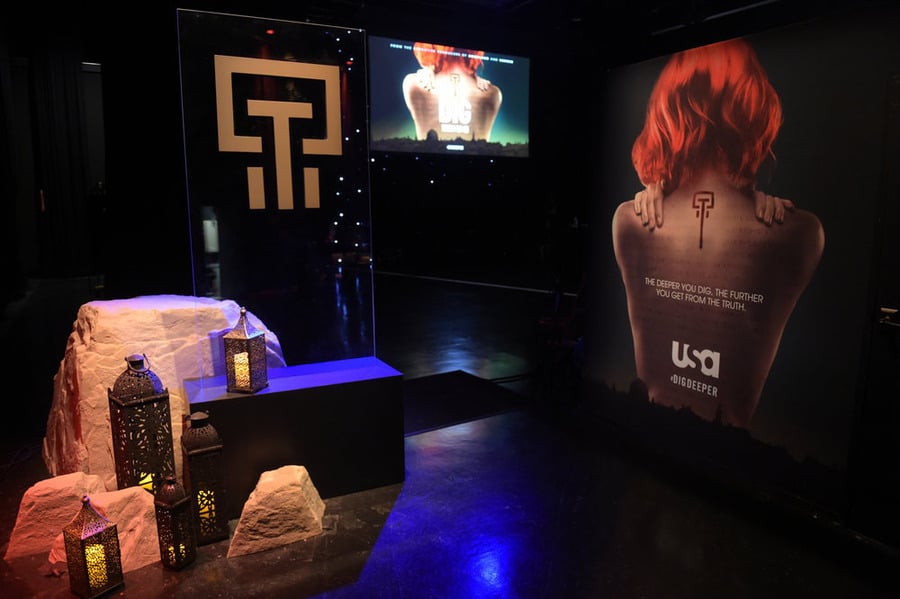 A scene from “Dig: Escape the Room” event at Universal Studios Hollywood on March 3, 2015. Photo by Jason Kempin/USA Network

(RNS) This week’s episode of “Dig,” the USA Network’s action-thriller fueled by biblical conspiracy and ancient archaeology, dives into Jewish law and prophesy in a way that clearly signals where the rest of the story is going.

In line with previous episodes, “Dig” continues to spin out its convoluted tale against a background of religious items and imagery — the current episode features a mikvah, a shofar, a priestly breastplate and more. Major spoiler alert here — read on only if you are up-to-date with the series.

“Next year in Jerusalem”

This phrase, uttered by Avram and his Croatian benefactor, will have a special resonance with Jewish viewers. It is what Jews say to each other at the end of the  Passover seder, and this episode of “Dig” airs one day before the start of the holiday (April 3) that commemorates the Jews’ exodus from Egypt.

The phrase may represent a longing for the restoration of the Jewish Temple, Judaism’s most holy site, which once sat on Temple Mount, the focus of much of “Dig”‘s dastardly doings. The Temple — destroyed twice — is supposed be restored once the Messiah comes, which Jews believe has not happened yet. Anybody who has stuck with “Dig” this long knows that there’s a plot afoot to somehow rebuild that Temple.

But not all Jews hope for a restoration of the Temple. The late Rabbi David Hartman, author of “The Leader’s Guide to the Family Participation Haggadah: A Different Night,” wrote that the phrase contains a “radical futurism,” a belief that the coming year is full of potential for Jews and all mankind.

“Passover is the night for reckless dreams; for visions about what a human being can be, what society can be, what people can be, what history may become,” he wrote. “That is the significance of ‘Le-shanah ha-ba-a b’Yerushalayim’ (Next year in Jerusalem).”

“There is no greater assurance of life than sacrificial death”

So says Rabbi Lev, the most shadowy figure in “Dig.”

“How easily we can lose sight of why we strive to build the temple,” he continues. “To honor God and make atonement, we sacrifice.”

And, oh boy, do they sacrifice.

But what’s behind the idea of sacrifice and atonement in Judaism?

But Jews do not offer animal sacrifice today, and have not since the second century. It is generally held that without the Temple — the place of sacrifice — there can be no sacrifice.

But if the Temple were restored — which is what some of the characters in “Dig” are working toward — then sacrifice could resume, no?

That bodes badly for Red, the show’s adorable calf, who is currently on a big adventure. Some Jews believe that when the Messiah comes, he’ll restore the Temple by sacrificing a pure red heifer. Look out, Red! The goal of such a sacrifice would be to cleanse or purify Jews for the return of the Temple.

These are a character’s final words before he blows his brains out. The coming of the Messiah — or the “anointed one” — is predicted in several of the books of the Hebrew Bible. It is a difference of opinion over the messianic nature of Jesus that divides Christians from Jews — Christians believe Jesus was the foretold Messiah; Jews believe the Messiah has not yet come.

According to the Hebrew Bible, the mashiach will have certain characteristics: He will be human, he’ll be a descendant of King David, he will know Jewish law, and he will be a judge, a charismatic leader and win many battles for Israel.

Sound like any particular character in “Dig”? Keep your eye on Joshua, who has the power to judge people guilty or innocent, knows his Bible and is a test-tube baby.

And in other religion-related stuff, what was that enormous pot pipe Emma’s friends were using? It appeared to be a shofar, a hollowed-out ram’s horn used to herald in the High Holy Days of Rosh Hashanah and Yom Kippur. Usually, Jews blow air into it, not suck smoke out of it.

And what’s up with the symbol on the ceiling — the same one Peter (Jason Isaacs) finds in Emma’s diary. Looks like a blueprint — perhaps for a Temple? 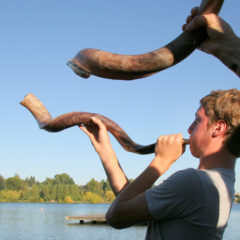 Opinion
Where do sounds go when they die?

Martini Judaism
During the High Holy Days, ‘each of us is a cemetery’
Follow us on Facebook!
Submit your photos to RNS