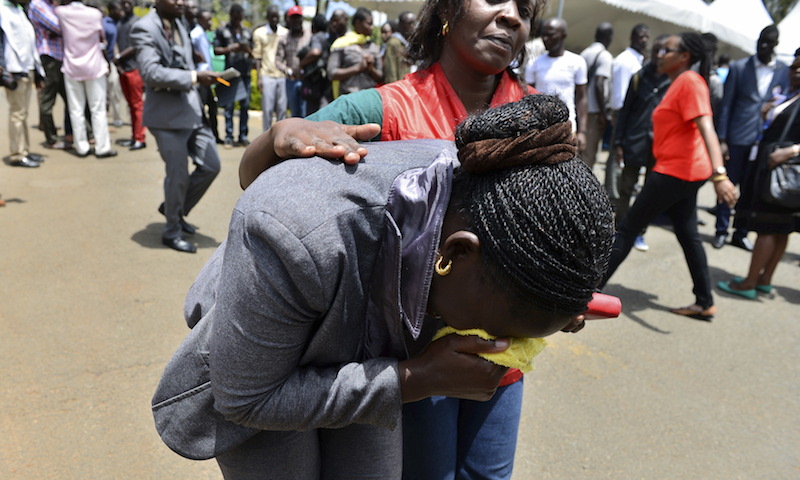 A Red Cross worker comforts a mourner as bodies of the students killed in a Thursday (April 2) attack, arrive at the Chiromo Mortuary in Nairobi. The assault by Somali militants killed 148 people on a Kenyan university, as anger grew among local residents over what they say was a government failure to prevent bloodshed. REUTERS/Herman Kariuki *Editors: This photo may only be republished with RNS-PERSECUTION-ENVOY, originally transmitted on April 23, 2015.
April 3, 2015
Fredrick Nzwili 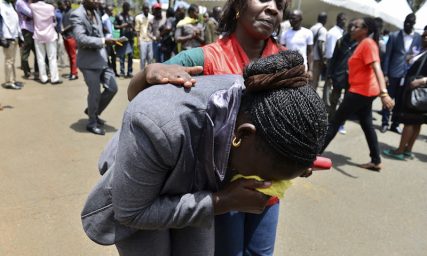 A Red Cross worker comforts a mourner as bodies of the students killed in a Thursday (April 2) attack, arrive at the Chiromo Mortuary in Nairobi. At least 147 people died in an assault by Somali militants on a Kenyan university, as anger grew among local residents over what they say was a government failure to prevent bloodshed. REUTERS/Herman Kariuki

Al-Shabab, the Somalia-based Muslim insurgency, claimed responsibility for the massacre that began around 5:30 a.m. Thursday (April 2) as Muslims students were at mosque for morning prayers and Christian students were still asleep in their dorms.

The masked attackers -- strapped with explosives and armed with AK-47s -- stormed the dorms, took some hostages and gunned down others. When Kenyan security forces struck back, the attackers detonated explosives. Security forces killed four militants.

The Rev. Peter Karanja, general secretary of the National Council of Churches of Kenya, said the government and those responsible for security must start asking hard questions about what ails Kenya’s security system.

“It is our conviction that the folly of our homeland security is systemic and cannot be given cosmetic solutions,” said Karanja, who urged the international community to help confront these groups.

Anglican Archbishop Julius Kalu of Mombasa, a coastal city in southeastern Kenya, said the terrorists wanted to divide the country along religious lines.

“This must be resisted,” said Kalu while urging leaders to move to end religious, political and ethnic divides.

“This is an international war and can only be won if everyone takes part,” Salat added.

The clerics insisted on heightened security in all parts of the country, and asked the government to rein in social media, which they suggested was contributing to raised tensions.

Cardinal Pietro Parolin, the Vatican’s secretary of state, sent a telegram to Kenya’s Conference of Catholic Bishops to express Pope Francis’ condolences. It said: “His Holiness condemns this act of senseless brutality and prays for a change of heart among its perpetrators. He calls upon all those in authority to redouble their efforts to work with all men and women in Kenya to bring an end to such violence and to hasten the dawn of a new era of brotherhood, justice and peace.”