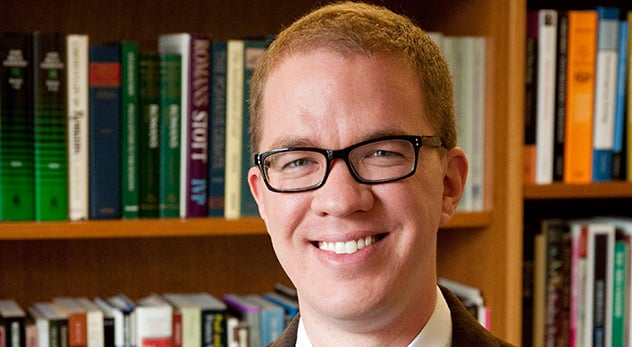 In 2010, a seminary professor from Pennsylvania published a short book that helped fan the flames of a growing movement of celibate gay Christians. The professor was Wesley Hill, and the book was “Washed and Waiting: Reflections on Christian Faithfulness and Homosexuality.”

At the end of this month, Hill takes his arguments a step further with the release of a second book, “Spiritual Friendship: Finding Love in the Church as a Celibate Gay Christian.” In it, he argues that in order to forge a new path for LGBT Christians, the faithful must reimagine friendship. Garnering endorsements from respected thinkers such as Duke’s Richard Hays and Baylor’s Alan Jacobs, it will no doubt generate much conversation. Here, he offers an exclusive look at the book and his message.

RNS: Let’s start with the foundation. How do you define friendship in a sentence or two?

WH: According to Christian writers of the past, spiritual or Christ-centered friendship—the kind of friendship I’m writing about—is a bond between two (or more) people who feel affection for each other. But it’s also a bond that has a trajectory. It’s a relationship that’s about helping one another along towards deeper love of God and neighbor. I like that but would add that as those sorts of friendships mature and deepen, they often start to become more committed and permanent. It’s almost as if the friends want to become more like spiritual siblings.

RNS: Which Bible passages paint a picture of the kind of friendship you’re describing?

WH: Obviously the story of David and Jonathan is an important one. Also the story of Ruth and Naomi, and maybe even, in certain respects, the story of Paul and Timothy, are key exemplars. But I would say my picture of friendship is most influenced by Jesus’ own life. He himself enjoyed special friendships with Lazarus and his sisters Mary and Martha, as well as his “inner circle” of Peter, James, and John. He taught his followers to view each other not just as acquaintances but as family.

RNS: You argue that friendship should be understood as a vowed relationship, much like marriage. Could you imagine this looking like a same-sex partnership–except non-sexual–or is that still off-limits in your view?

WH: Throughout Christian history, friends have made promises to each other. Because I accept the traditional Christian view that marriage is about male and female coming together in a lifelong covenant and raising children, I wouldn’t want to see vowed friendships become a covert way of promoting same-sex sexual intimacy in the church. But I do think that committed, permanent friendships may be one way for gay and lesbian Christians to practice celibacy.

WH: Whatever life choices we’re making, we’re always opening ourselves up to various dangers. If I try to isolate myself from friends that I might be sexually attracted to, then I’m opening myself up to loneliness and despair. On the other hand, if I commit to close, loving friendships, then I’m opening myself up to other dangers, including, at times–but not always–sexual temptation. The key is to find places where we can honestly face our desires, rather than trying to hide them from ourselves. It’s been important for me to talk with pastors, counselors, and spiritual guides, with whom I can be candid about the erotic attractions I develop for certain friends on occasion.

WH: My sense of the debate in the Christian churches is that many people think there are two options: Be gay and celibate and therefore lonely, or be gay and partnered and therefore not alone. What I’m trying to say is that I don’t think those are the only two options. I’m trying to live in a different place: openly acknowledging that I’m gay, pursuing a life of sexual abstinence in obedience to what the Bible teaches, and seeking to fill that life full of friendship and community.

How would our debates about how to love gay and lesbian people in our churches look different if celibacy seemed like a viable option, because deep friendships were a normal part of the Christian life, rather than the bleak occasion for marginalization that it so often appears to be now?

RNS: I mean, if I told a heterosexual married couple to stop having sex and just nurture friendship, there is no doubt–literally no doubt–that they would not be fulfilled pursuing a “friendship only” path. Doesn’t that say something?

WH: All Christian heterosexual couples have to live without sexual “fulfillment,” in some sense. Normally, marriage involves periods of sexual abstinence, and sometimes, through circumstances beyond the couple’s control, it may even involve lifelong sexual abstinence or ongoing sexual dissatisfaction. But I admit that traditional Christianity is asking gay and lesbian people to make a hard choice. Much like the believers St. Paul describes as “groaning” and “waiting eagerly for the redemption of their bodies,” we gay Christians are called to a challenging, often painful obedience, and I trust that God’s grace is there to sustain us and catch us when we fall.

RNS: Let’s get practical. Give me one thing–only one–that you think churches should do to promote and nurture your kind of friendship?

WH: I wish more churches would recognize that certain friends are, for gay Christians, our “significant others.” Right now, if you’re gay and celibate in a lot of conservative churches, you’re probably going to feel under suspicion–or worse. If you sit with your best friend in church, if you go on vacation with your friend, or if you spend Thanksgiving and Christmas with her and her family, you may get raised eyebrows or else just blinking incomprehension. I’d like that to change.

I’d like to see close, committed, promise-sealed friendships become normalized in churches that continue to teach the historic, traditional Christian sexual ethic. What if we treated it as important, honorable, and godly for a celibate gay Christian to commit to a close friend precisely as a way of growing in Christian love? That would make a big difference in how we currently think about homosexuality.