CANTERBURY, England (RNS) The senior rabbi of England’s Movement for Reform Judaism is launching a matchmaking service that will cater to same-sex Jews as well as opposite-sex couples.

After requests from members of England’s small same-sex Jewish community, Rabbi Laura Janner-Klausner and other Reform rabbis will act as “shadchanim,” or matchmakers, a time-honored tradition in a faith that values marriage.

Janner-Klausner said she wants to launch a website that will serve as a conduit, both online and off, where lonely men and women, both gay and straight, can meet. If relationships develop, the couples can then discuss religious home issues and other problems with qualified rabbis.

England’s Reform and Liberal Jewish movements have long sanctioned gay marriage. But it has not received the blessing of this country’s much larger Orthodox community.

“I have great sympathy with gay people who are lonely, but there is no question that single-sex relations are contrary to the halakhah,” or Jewish law, said Rabbi Alan Plancey, an Orthodox rabbi.

Unlike Plancey, Janner-Klausner believes halakhah changes with the times and that gay people have as much a right to sanctify their relationships as everyone else.

“The point to make is that we want to help people to meet other Jews, those who are interested in living a Jewish life,” she said. “Both relationships, straight or gay, can have ‘kedusha,’ holiness.” 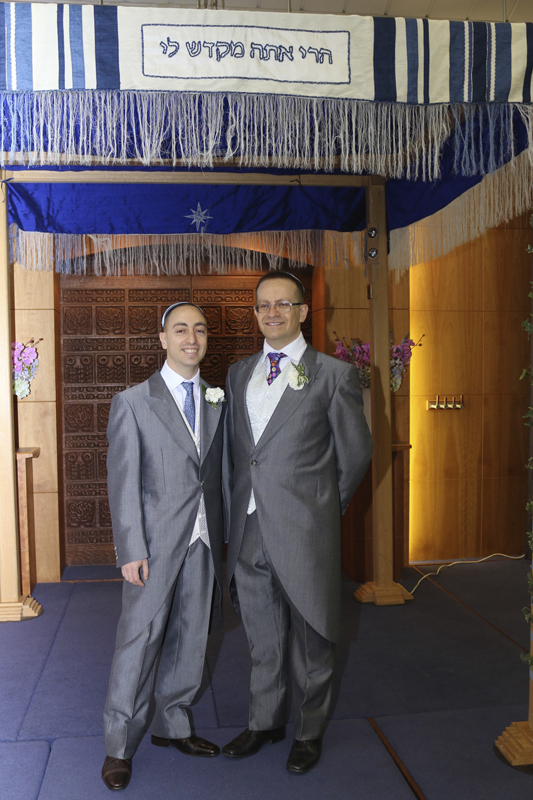 Eli Kaufman, left, with his husband, Paul Ginsberg, under the Chuppah during their wedding. Photo courtesy of Paul Ginsberg

“It’s part of a golden tradition, but it shouldn’t be regarded as an old-fashioned thing to do,” she said. “No one should think of gay people as being any different in that regard.”

But the Reform movement is only willing to marry couples — straight or gay — if both partners are Jewish.

She added: “At the bottom of it all is the question of numbers. Jewish gays live in a niche religious community. They are a minority within a minority. If they want to remain Jewish, it’s even harder for them than other gay people. I believe that the community is more ready for this than ever before.”

There are 42 Reform Judaism congregations in England, Wales and Scotland, but it is not clear how many will be involved as part of the matchmaking service or when the service will begin.

A recently married same-sex couple said attitudes toward such unions are changing, even among Orthodox Jews in Israel.

Eli Kaufman and Paul Ginsberg were married in November by Rabbi Miriam Berger and Cantor Zoe Jacobs at the Finchley Reform Synagogue in North London.

“Eli and I were lucky to meet up,” Ginsberg said. “It took us a long time to find the right partners. By finding someone of the same religion, we shared a common cultural and religious heritage that we both value hugely, but this might have otherwise been lost or diminished. Finding the right partner is always a challenge, so any help along the way can only be a good thing.” Ginsberg, 35, is from London, where he works as a database administrator for a British charity. Kaufman, 32, was born in Russia but was brought up in Israel and works at the London office of an Israeli technology company. The couple met online and decided to have a drink together. Kaufman’s idea for a second date was klezmer dancing. “Our fate was sealed,” Ginsberg said, chuckling.

“We have got used to the ordinariness of being a same-sex couple in London,” he said. “But even when we’re in Israel it no longer seems like an issue.”