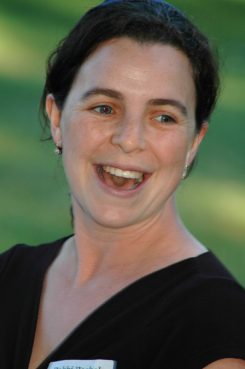 To the older Jewish men gathered for morning prayers, the sight of a woman decked out like a man at prayer was shocking. Many didn’t know what to make of Nussbaum’s brazen willingness to break with tradition.

Now 38, and a rabbi, Nussbaum leads The Kavana Cooperative, a growing Jewish prayer community in Seattle that has much in common with a synagogue but doesn’t call itself one. Like the tefillin-wrapping teenage Nussbaum, Kavana prides itself on a reputation for doing Judaism its own way.

It is known, as are about 10 other like-minded “indie synagogues,” for its exuberant prayer, willingness to experiment and welcoming attitude toward those whose comfort zone lies outside the traditional Reform, Conservative and Orthodox denominations. Another commonality: Women lead most of them.

These communities have grabbed the attention of more conventional Jewish leaders because they have enjoyed success where mainstream synagogues and institutions often struggle: attracting young Jews.

Many of these groups, born less than a decade ago, draw scores of people to Shabbat services and hundreds to holiday celebrations. The Los Angeles-based Ikar congregation boasts 600 family units, an impressive size in the Jewish world. 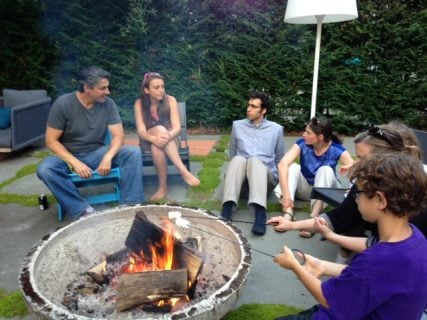 “People are interested in being a part of institutions that they have a chance to help shape,” she said. “Every time they turn around there isn’t some document or some structure that says ‘no, you can’t.’”

And it makes sense that women lead so many of these communities, because “women were historically left out of the institutional structure,” Diner continued. If a whole body of feminist psychology is right, “women tend to be more interested in reaching out and building consensus than issuing fiats from the top down.”

The rabbi’s gender is not necessarily the key factor in the creation or success of these alternative congregations, but it likely plays a role, said Nussbaum.

“Perhaps it’s because women understand, by definition, what it means to feel on the boundaries in some sense, and to cross those boundaries,” she said.

“Kavana” means “intention” in Hebrew, a word used in Judaism to describe a meaningful prayer. Like many of these Jewish communities — including the Kitchen in San Francisco, Mishkan Chicago, and Ikar, Nashuva and The Open Temple in Los Angeles — Kavana has named itself for a spiritual feeling or idea. That contrasts intentionally with the more stoic names of traditional synagogues: Congregation Beth El or Temple Emanuel.

The congregations skew young and include many Jews who had previously been disconnected from synagogue or Jewish life. Many of those attracted to these communities appreciate the vibrant music, democratic governance and penchant for interpreting Jewish tradition creatively.

Rabbi Sharon Brous is the founding rabbi of Ikar, a community of inspiration and experimentation dedicated to reclaiming and reinvigorating Jewish tradition and practice in Los Angeles and throughout the Jewish world. Photo courtesy of Ikar

Nussbaum, for example, recently presided at the bat mitzvah of a girl who did not want to lead prayers in Hebrew as girls and boys traditionally do. Instead she made a four-minute animated film on a chapter of the Book of Exodus, screened it in a local theater for her family and friends and then joined Nussbaum on stage for a discussion of the text on which it is based.

Rabbi Sharon Brous, 41, who leads Ikar, draws deeply on the Conservative tradition in which she was ordained, but she won’t have pews with fixed seating because they’re an impediment to dancing during services.

“As American rabbis, we go to Jerusalem each summer and we know how to pray when we’re in Jerusalem — we cry and move and we are moved,” she said.

But then, back home, “we tend to perpetuate prayer environments that are perfunctory, rote and spiritually uninteresting,” she said. “It’s not like this everywhere, but this is more the rule than the exception.”

Named one of the 50 most influential rabbis in the nation by Newsweek and The Daily Beast, Brous draws a connection between her gender and her drive to make Jewish communal prayer more soulful.

“There is something about operating in a system that was not written by you and was not written for you that creates a kind of innate resistance that leads to incredible possibilities,” she said.

In Chicago, the Mishkan — or tabernacle — moves. Founded in 2011 by Rabbi Lizzi Heydemann, the community has three regular meeting places — including a synagogue and a nondenominational spiritual center. But it also convenes study and discussion groups in cafes, bars, and private homes across town.

Jonathan Posner, a 25-year-old chef raised in a traditional Jewish home, said he had been shopping for a synagogue but found many services too dry, and others too academic. He wanted to flex his spiritual muscles in a different setting.

“I immediately connected,” he said of the Mishkan’s Hebrew-heavy service. “It’s intellectual and theologically progressive, but in the breaks between prayers, when a rabbi in other places might talk at a congregation, the Mishkan is more discursive.”

Not everyone thinks women’s leadership is necessarily a key to the success of these communities. Heydemann, 34, grew up in the Reform movement, the first American Jewish stream to ordain a woman, back in 1972 — nearly a decade before she was born.

“The story of having to fight my way in does not resonate,” she said.

What does resonate is the common story of American Jews who feel alienated from Jewish life because they have little knowledge of Jewish ritual and Hebrew. Her parents did not know much of Jewish tradition, she said.

“I’ve always been particularly sensitive to people who are not insiders from a ritual or practice or knowledge standpoint,” she said. “I have no idea whether that has to do with my being female.” Brous said she explained to Los Angeles area rabbis that she was not trying to replace conventional synagogues, but offer a different way to practice Judaism to Jews who weren’t going to synagogue in the first place.

Traditional denominations will continue to have meaning for many Jews, even though alternatives to conventional synagogues may find a permanent place in the Jewish future, said Sylvia Barack Fishman, professor of contemporary Jewish life at Brandeis University. “I don’t think we’re living in a post-denominational age, although there certainly is a post-denominational movement within Judaism,” she said.

Rabbi Steven Wernick, head of the United Synagogue of Conservative Judaism, the umbrella group for the second-largest movement of Judaism in the U.S., said he takes pride in these non-synagogues, and the fact that many of their leaders were trained in Conservative rabbinical schools.

“Whether people are card-carrying members of a particular denomination,” Wernick said, is not important.

“The goal of Judaism is to live a life that matters.” These communities are engaging young people, he added, “in a Judaism that is relevant and helps people transform their lives.”

Manna From Heaven from Frizzle Films on Vimeo. An animated film created by a girl for her bat mitzvah at The Kavana Cooperative.