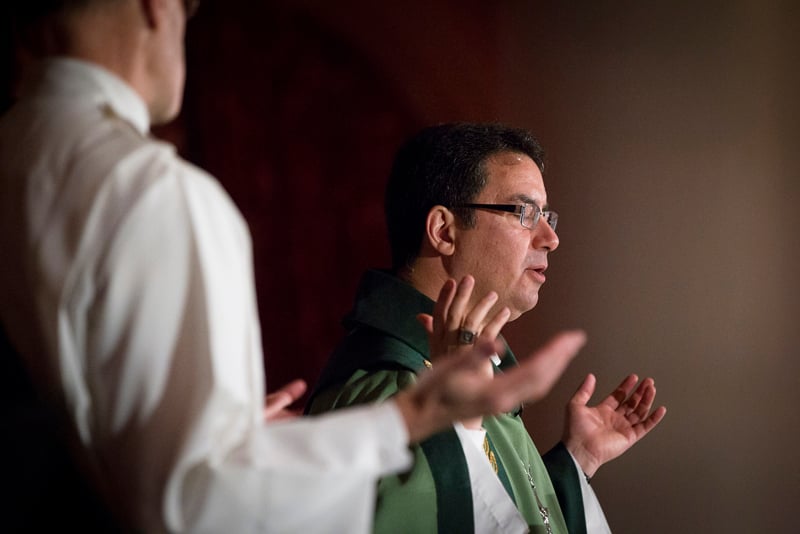 Bishop Oscar Cantu of Las Cruces, N.M., prays over the Eucharist during Mass on Feb. 9, 2015 at the Omni Shoreham Hotel in Washington. Bishop Cantu is chairman of the U.S. bishops' Committee on International Justice and Peace. Photo by Tyler Orsburn, courtesy of Catholic News Service
April 13, 2015
David Gibson

Bishop Oscar Cantu of Las Cruces, N.M., prays over the Eucharist during Mass on Feb. 9, 2015 at the Omni Shoreham Hotel in Washington. Cantu is chairman of the U.S. bishops' Committee on International Justice and Peace. Photo by Tyler Orsburn, courtesy of Catholic News Service

(RNS) The U.S. Catholic bishops have welcomed the Obama administration’s tentative agreement aimed at limiting Iran’s nuclear ambitions, and their top spokesman on international affairs bluntly warned Congress against doing anything to undermine it.

The bishops “oppose efforts that seek to undermine the negotiation process or make a responsible multi-party agreement more difficult to achieve and implement,” Bishop Oscar Cantu, chairman of the bishops’ Committee on International Justice and Peace Committee, wrote to House and Senate lawmakers on Monday (April 13).

“The alternative to an agreement leads toward armed conflict, an outcome of profound concern to the Church,” said Cantu, who heads the Diocese of Las Cruces, N.M.

The warning -- and accompanying support in a letter of commendation that Cantu sent last week to Secretary of State John Kerry -- follow a thumbs-up from Pope Francis to the proposed accord, and coincides with an endorsement on Monday by a group of largely liberal mainline Protestant leaders.

Diplomats from the U.S. and six world powers meeting in Switzerland earlier this month unveiled the framework of what could be an historic accord to inspect Iran’s growing nuclear program and prevent it from developing a nuclear weapon.

The announcement follows years of negotiations, sanctions on Tehran, and periodic warnings of military action against Iran. The framework -- which must still be finalized by both sides by the end of June -- was seen as a triumph of diplomacy.

But foreign policy hawks in the U.S., and in Israel have blasted the deal as a giveaway to Iran that will allow that nation to develop a bomb that can threaten Israel and Tehran’s neighbors.

President Obama and his congressional critics continued to spar over the weekend on the merits of the framework and how much say Congress can or should have in approving or modifying any eventual agreement.

On Easter Sunday, Pope Francis, who has supported the talks in the past, prayed that “the framework recently agreed to in Lausanne … may be a definitive step toward a more secure and fraternal world.”

That statement, combined with Cantu’s words of praise to Kerry and this week’s warning to Congress, are more fodder for the White House as it wages a political battle for approval.

In a parallel development, dozens of other U.S. Christian leaders, largely mainline Protestants and liberal evangelicals, ran a full-page ad Monday in the Washington newspaper Roll Call that called on lawmakers to support the framework agreement.

Titled “Hope, But Verify” -- a riff on Ronald Reagan’s “Trust, but verify” slogan about negotiating with the Soviets in the 1980s -- the statement was organized by the Rev. Jim Wallis, head of Sojourners, and it says the framework must be fleshed out and compliance carefully monitored.

But the ad praises the framework as a crucial step forward for peace, and the dozens of signatories call on the nation’s political leaders to “pursue this agreement with integrity, commitment, and perseverance.”

The statement concludes by quoting Francis’ statement of support.